Vera Zorina (January 2, 1917 – April 9, 2003), born Eva Brigitta Hartwig, was a Norwegian ballerina, theatre and film actress, and choreographer. Today, she is chiefly remembered for her films choreographed by her then-husband George Balanchine. They include the Slaughter on Tenth Avenue sequence from On Your Toes, The Goldwyn Follies, I Was an Adventuress with Erich Von Stroheim and Peter Lorre, Louisiana Purchase with Bob Hope, and dancing to "That Old Black Magic" in Paramount Pictures' Star Spangled Rhythm.

Zorina was born in Berlin, Germany. Her father Fritz Hartwig was a German lapsed Roman Catholic, and her mother Abigail Johanne Wimpelmann (known as Billie Hartwig) was Norwegian and Lutheran. Both were professional singers. Young Eva was brought up in a small coastal town between Trondheim and Bergen, called Kristiansund North, where she debuted as a dancer at the Festiviteten, the oldest opera house in Norway. She received her education at the Lyceum for Girls in Berlin and was trained in dance by Olga Preobrajenska and Nicholas Legat.

At age 12, she was presented to Max Reinhardt, who cast her in A Midsummer Night's Dream (1929) and Tales of Hoffman (1931). A performance at London's Gaiety Theatre won her an invitation to join the Ballet Russe de Monte Carlo in 1933, at which time she adopted the stage name of Vera Zorina. The company only wanted Russian names and she was given a list of 20 and chose the last name because she could pronounce it. A few years later, she attained a lead role in the London production of On Your Toes (1937) and was seen by American film producer Samuel Goldwyn, who signed her to a seven-year film contract. She appeared in seven Hollywood movies between 1938 and 1946. 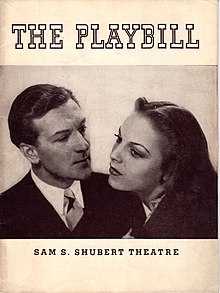 Original 1938 playbill from I Married an Angel starring Vera Zorina. From the Vera Zorina Collection at Ailina Dance Archives.

When she lost the role of Maria in For Whom the Bell Tolls after only two weeks shooting, her film career came to a halt. The Hollywood axe fell on her when co-star Gary Cooper, director Sam Wood, and Ernest Hemingway all preferred Ingrid Bergman.

One of her major stage roles was in the 1938 Rodgers and Hart musical I Married an Angel. As the title character, she played an exquisite angel who descended from heaven to marry a Hungarian banker played by Dennis King, but whose complete lack of human guile presented him with a whole new set of problems. (Jeanette MacDonald had that role in the film version.)

In 1945, she had great success as Ariel in William Shakespeares The Tempest at the Alvin Theatre (now named Neil Simon Theatre) on Broadway. Starting in 1948, Zorina appeared in Arthur Honegger's Joan of Arc at the Stake, playing the title role in the first American performance with the New York Philharmonic under Charles Münch. She subsequently commanded the role many times, notably in the recorded performance from the Royal Festival Hall in June 1966, with the London Symphony Orchestra under Seiji Ozawa. In 1968, she directed Cabaret at the Oslo Nye Teater to great acclaim. Her farewell performance was in Perséphone with New York City Ballet in 1982. In the 1970s, Vera Zorina was appointed director of the Norwegian National Opera and Ballet (Den Norske Opera & Ballet), but withdrew before she officially settled in because of her husband's illness.

She was active with Lincoln Center as an adviser and director and, for several seasons, directed operas at the Santa Fe Opera in New Mexico. In 1986, she completed Zorina, her autobiography.

Zorina was married in 1938 to choreographer George Balanchine (her first marriage and his second marriage); the couple divorced in 1946. She danced in productions he choreographed for both stage and screen, including On Your Toes, a Broadway hit later adapted for the screen by Lawrence Riley.

From 1946 her second husband was Columbia Records president Goddard Lieberson until his death on May 29, 1977. They had two sons: Peter Lieberson, a composer, and Jonathan Lieberson. Her final marriage in 1991 was to harpsichordist Paul Wolfe until her death in 2003 at age 86 of undisclosed causes.

Zorina was the grandmother of sisters Elizabeth (Lizzie), Katherine, and Kristina Lieberson, who are now members of the band TEEN.