Wallis, Gilbert and Partners was a British architectural partnership responsible for the design of many Art Deco buildings in the UK in the 1920s and 1930s. It was established by Thomas Wallis (1873–1953) in 1916. Wallis had previously served with Sir Frank Baines in the Office of Works. Although the identity of Gilbert has not been established, architects who worked with them included James Warne and Harry Beken; later partners included Frederick Button, Douglas Wallis (1901–1968), Agbolahan Adesegun (1935–2008) and J. W. MacGregor (d. 1994). Notable buildings include the Hoover Factory and the Firestone Tyre Factory. The firm also occasionally designed country houses, for instance, Limber and Ripley Grange at Loughton for Charles Frederick Clark, proprietor of the Caribonum group. The partnership was dissolved in 1945. https://www.thegazette.co.uk/London/issue/37436/page/540 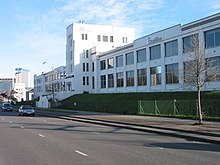 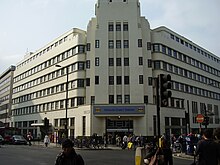 The firm also designed a number of bus garages for London Transport and its predecessors at:-

Retrieved from "https://en.wikipedia.org/w/index.php?title=Wallis,_Gilbert_and_Partners&oldid=960947456"
Uses material from the Wikipedia article Wallis, Gilbert and Partners, released under the CC BY-SA 3.0 license.