Overview of the distribution of water on planet Earth 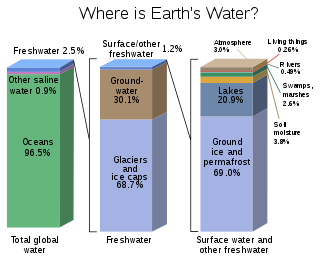 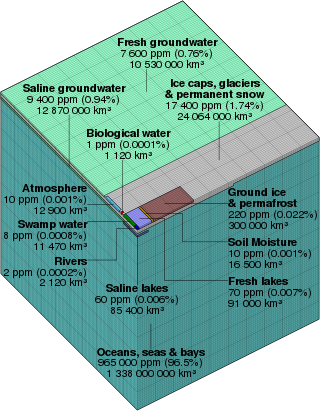 A graphical distribution of the locations of water on Earth

Most water in Earth's atmosphere and crust comes from the World Ocean's saline seawater, while fresh water accounts for nearly 1% of the total. Because the oceans that cover roughly 71% of the area of Earth reflect blue light, Earth appears blue from space, and is often referred to as the blue planet and the Pale Blue Dot. An estimated 1.5 to 11 times the amount of water in the oceans may be found hundreds of kilometers deep within the Earth's interior, although not in liquid form.

The oceanic crust is young, thin and dense, with none of the rocks within it dating from any older than the breakup of Pangaea. Because water is much denser than any gas, this means that water will flow into the "depressions" formed as a result of the high density of oceanic crust (on a planet like Venus, with no water, the depressions appear to form a vast plain above which rise plateaux). Since the low density rocks of the continental crust contain large quantities of easily eroded salts of the alkali and alkaline earth metals, salt has, over billions of years, accumulated in the oceans as a result of evaporation returning the fresh water to land as rain and snow.

As a result, the vast bulk of the water on Earth is regarded as saline or salt water, with an average salinity of 35‰ (or 4.5%, roughly equivalent to 34 grams of salts in 1 kg of seawater), though this varies slightly according to the amount of runoff received from surrounding land. In all, water from oceans and marginal seas, saline groundwater and water from saline closed lakes amount to over 97% of the water on Earth, though no closed lake stores a globally significant amount of water. Saline groundwater is seldom considered except when evaluating water quality in arid regions.

The remainder of Earth's water constitutes the planet's fresh water resource. Typically, fresh water is defined as water with a salinity of less than 1 percent that of the oceans - i.e. below around 0.35‰. Water with a salinity between this level and 1‰ is typically referred to as marginal water because it is marginal for many uses by humans and animals. The ratio of salt water to fresh water on Earth is around 50 to 1.

The planet's fresh water is also very unevenly distributed. Although in warm periods such as the Mesozoic and Paleogene when there were no glaciers anywhere on the planet all fresh water was found in rivers and streams, today most fresh water exists in the form of ice, snow, groundwater and soil moisture, with only 0.3% in liquid form on the surface. Of the liquid surface fresh water, 87% is contained in lakes, 11% in swamps, and only 2% in rivers. Small quantities of water also exist in the atmosphere and in living beings. Of these sources, only river water is generally valuable.

Most lakes are in very inhospitable regions such as the glacial lakes of Canada, Lake Baikal in Russia, Lake Khövsgöl in Mongolia, and the African Great Lakes. The North American Great Lakes, which contain 21% of the world's fresh water by volume, are the exception. They are located in a hospitable region, which is heavily populated. The Great Lakes Basin is home to 33 million people. The Canadian cities of Toronto, Hamilton, St. Catharines, Niagara, Oshawa, Windsor, Barrie, and Kingston and the U.S. cities of Duluth, Milwaukee, Chicago, Gary, Detroit, Cleveland, Buffalo, and Rochester, are all located on shores of the Great Lakes.

Although the total volume of groundwater is known to be much greater than that of river runoff, a large proportion of this groundwater is saline and should therefore be classified with the saline water above. There is also a lot of fossil groundwater in arid regions that has never been renewed for thousands of years; this must not be seen as renewable water.

However, fresh groundwater is of great value, especially in arid countries such as India. Its distribution is broadly similar to that of surface river water, but it is easier to store in hot and dry climates because groundwater storages are much more shielded from evaporation than are dams. In countries such as Yemen, groundwater from erratic rainfall during the rainy season is the major source of irrigation water.

Because groundwater recharge is much more difficult to accurately measure than surface runoff, groundwater is not generally used in areas where even fairly limited levels of surface water are available. Even today, estimates of total groundwater recharge vary greatly for the same region depending on what source is used, and cases where fossil groundwater is exploited beyond the recharge rate (including the Ogallala Aquifer) are very frequent and almost always not seriously considered when they were first developed.

Distribution of saline and fresh water

The total volume of water on Earth is estimated at 1.386 billion km³ (333 million cubic miles), with 97.5% being salt water and 2.5% being fresh water. Of the fresh water, only 0.3% is in liquid form on the surface. In addition, the lower mantle of inner earth may hold as much as 5 times more water than all surface water combined (all oceans, all lakes, all rivers).

The total volume of water in rivers is estimated at 2,120 km³ (510 cubic miles), or 0.49% of the surface fresh water on Earth. Rivers and basins are often compared not according to their static volume, but to their flow of water, or surface run off. The distribution of river runoff across the Earth's surface is very uneven.

There can be huge variations within these regions. For example, as much as a quarter of Australia's limited renewable fresh water supply is found in almost uninhabited Cape York Peninsula. Also, even in well-watered continents, there are areas that are extremely short of water, such as Texas in North America, whose renewable water supply totals only 26 km³/year in an area of 695,622 km², or South Africa, with only 44 km³/year in 1,221,037 km². The areas of greatest concentration of renewable water are:

Area, volume, and depth of the world ocean

Indeed, even in most arid zones, there tends to be few problems with variability of runoff because most usable sources of water come from high mountain regions which provide highly reliable glacier melt as the chief source of water, which also comes in the summer peak period of high demand for water. This historically aided the development of many of the great civilizations of ancient history, and even today allows for agriculture in such productive areas as the San Joaquin Valley.

The consequence of this is that many rivers in Australia and Southern Africa (as compared to extremely few in other continents) are theoretically impossible to regulate because rates of evaporation from dams mean a storage sufficiently large to theoretically regulate the river to a given level would actually allow very little draft to be used. Examples of such rivers include those in the Lake Eyre Basin. Even for other Australian rivers, a storage three times as large is needed to provide a third the supply of a comparable climate in southeastern North America or southern China. It also affects aquatic life, favouring strongly those species able to reproduce rapidly after high floods so that some will survive the next drought.

Tropical (Köppen climate classification A) climate rivers in Australia and Southern Africa do not, in contrast, have markedly lower runoff ratios than those of similar climates in other regions of the world. Although soils in tropical Australia and southern Africa are even poorer than those of the arid and temperate parts of these continents, vegetation can use organic phosphorus or phosphate dissolved in rainwater as a source of the nutrient. In cooler and drier climates these two related sources tend to be virtually useless, which is why such specialised means are needed to extract the most minimal phosphorus.

There are other isolated areas of high runoff variability, though these are basically due to erratic rainfall rather than different hydrology. These include:

It has been hypothesized that the water is present in the Earth's crust, mantle and even the core and interacts with the surface ocean through the "whole-Earth water cycle". However, the actual amount of water stored in the Earth's interior still remains under debate. 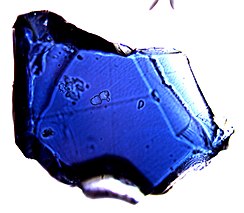 Ringwoodite is the major phase at the Earth's mantle between ~520 and ~660 km depth, possibly containing several weight percent of water in its crystal structure.

The amount of water stored in the Earth's interior may equal or exceed that in all of the surface oceans Some researchers proposed the total mantle water budget may amount to tens of ocean masses.The water in the Earth's mantle is primarily dissolved in nominally anhydrous minerals as hydroxyls (OH). These OH impurities in rocks and minerals can lubricates tectonic plate, influence rock viscosities and melting processes, and slow down seismic waves. The two mantle phases at the transition zone between Earth's upper and lower mantle, wadsleyite and ringwoodite, could potentially incorporate up to a few weight percent of water into their crystal structure. Direct evidence of the presence of water in the Earth's mantle was found in 2014 based on a hydrous ringwoodite sample included in a diamond from Juína, Brazil. Seismic observations suggest the presence of water in dehydration melt at the top of the lower mantle under the continental US. Molecular water (H2O) is not the primary water-bearing phase(s) in the mantle, but its high-pressure form, ice-VII, also has been found in super-deep diamonds.

The density of the Earth's core is a few percent less than that of pure iron (Fe) at the same pressure and temperature, which is usually interpreted as implying a substantial amount of light element(s) in the core, including hydrogen. Therefore, water may be present in the Earth's core as iron-hydrogen alloys.

Retrieved from "https://en.wikipedia.org/w/index.php?title=Water_distribution_on_Earth&oldid=1003220974"
Uses material from the Wikipedia article Water distribution on Earth, released under the CC BY-SA 3.0 license.