Top of a saturated aquifer, or where the water pressure head is equal to the atmospheric pressure
For the architectural feature, see Water table (architecture). 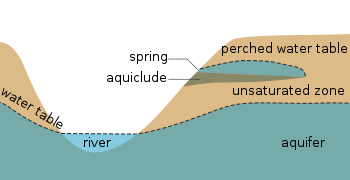 The water table is the surface where the water pressure head is equal to the atmospheric pressure (where gauge pressure = 0). It may be visualized as the "surface" of the subsurface materials that are saturated with groundwater in a given vicinity.

The groundwater may be from precipitation or from groundwater flowing into the aquifer. In areas with sufficient precipitation, water infiltrates through pore spaces in the soil, passing through the unsaturated zone. At increasing depths, water fills in more of the pore spaces in the soils, until a zone of saturation is reached. Below the water table, in the phreatic zone (zone of saturation), layers of permeable rock that yield groundwater are called aquifers. In less permeable soils, such as tight bedrock formations and historic lakebed deposits, the water table may be more difficult to define.

The water table may vary due to seasonal changes such as precipitation and evapotranspiration. In undeveloped regions with permeable soils that receive sufficient amounts of precipitation, the water table typically slopes toward rivers that act to drain the groundwater away and release the pressure in the aquifer. Springs, rivers, lakes and oases occur when the water table reaches the surface. Groundwater entering rivers and lakes accounts for the base-flow water levels in water bodies.

Within an aquifer, the water table is rarely horizontal, but reflects the surface relief due to the capillary effect (capillary fringe) in soils, sediments and other porous media. In the aquifer, groundwater flows from points of higher pressure to points of lower pressure, and the direction of groundwater flow typically has both a horizontal and a vertical component. The slope of the water table is known as the hydraulic gradient, which depends on the rate at which water is added to and removed from the aquifer and the permeability of the material. The water table does not always mimic the topography due to variations in the underlying geological structure (e.g., folded, faulted, fractured bedrock). 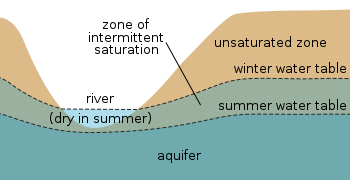 Seasonal fluctuations in the water table-during the dry season, river beds may dry up.

On low-lying oceanic islands with porous soil, freshwater tends to collect in lenticular pools on top of the denser seawater intruding from the sides of the islands. Such an island's freshwater lens, and thus the water table, rises and falls with the tides.

In some regions, for example, Great Britain or California, winter precipitation is often higher than summer precipitation and so the groundwater storage is not fully recharged in summer. Consequently, the water table is lower during the summer. This disparity between the level of the winter and summer water table is known as the "zone of intermittent saturation", wherein the water table will fluctuate in response to climatic conditions.

Fossil water is groundwater that has remained in an aquifer for several millennia and occurs mainly in deserts. It is non-renewable by present-day rainfall due to its depth below the surface, and any extraction causes a permanent change in the water table in such regions. 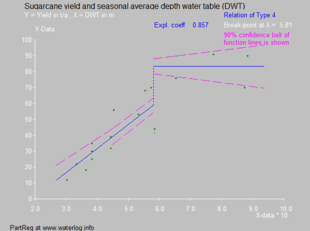 Yield of sugarcane versus depth of the water table, Australia. The critical depth is 0.6 m.

Most crops need a water table at a minimum depth because at shallower depths the crop suffers a yield decline. For some important food and fiber crops a classification was made:

(Where DWT = depth to water table in centimetres)