The West Coast (Māori: Te Tai Poutini) is a region of New Zealand on the west coast of the South Island that is administered by the West Coast Regional Council. It comprises the territorial authorities of Buller District, Grey District and Westland District. The principal towns are Westport, Greymouth, and Hokitika. The region is one of the more remote and most sparsely populated areas of the country.

The name Westland is used by some New Zealanders to refer to the whole of the West Coast, including Grey District, Buller District and Fiordland, and can also refer to the short-lived Westland Province of 1873–76.

Fiordland is on the west coast, but is in the Southland Region rather than the West Coast Region.

Inhabitants of the West Coast are colloquially known as "Coasters".

The region reaches from Kahurangi Point in the north to Awarua Point in the south, a distance of 600 km. It has an area of 23,276 km2. To the west is the Tasman Sea (which like the Southern Ocean can be very rough, with four-metre swells common), and to the east are the Southern Alps. Much of the land is rugged, with a coastal plain where much of the population resides. It is divided into the three local government districts of (from north to south) Buller, Grey and Westland. 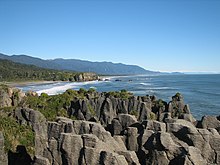 The land is very scenic, with wild coastlines, mountains and a very high proportion of native bush, much of it native temperate rain forest. It is the only part of New Zealand where significant tracts of lowland forest remain: elsewhere, for instance on the Canterbury Plains and in the Firth of Thames, they have been almost completely destroyed for settlement and agriculture.

The region has very high rainfall due to the prevailing northwesterly wind pattern and the location of the Southern Alps, which give rise to heavy orographic precipitation. The rain shadow effect is responsible for the relatively arid climate of the Canterbury Plains on the other side of the Southern Alps. 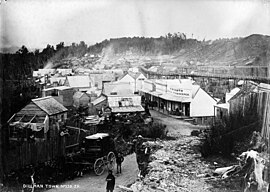 The region is home to Ngāi Tahu, who value it for the greenstone (pounamu) found there in abundance.

The region was only occasionally visited by Europeans until the discovery of gold near the Taramakau River in 1864 by two Māori, Ihaia Tainui and Haimona Taukau. By the end of the year there were an estimated 1800 prospectors, many of them around the Hokitika area, which in 1866 was briefly the most populous settlement in New Zealand.

The region was divided between Nelson Province and Canterbury Province from 1853: in 1873 the Canterbury portion of the region formed its own province, the Westland Province, until the abolition of the provincial system in 1876. 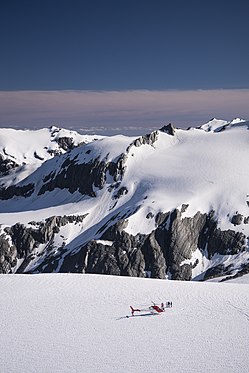 Fox Glacier, a popular visitor destination on the West Coast

The West Coast Gold Rush between 1864 and 1867 created numerous gold rush towns such as Okarito, which at one time was the largest town on the West Coast but quickly almost vanished as miners moved on. After that time, the population dwindled, but the main towns that still exist had become established.

Following greenstone and gold, the next valuable mineral was coal. Discovered near the Buller River in the mid-1840s, mining began in earnest during the 1860s. By the 1880s coal had become the region's main industry, with mines throughout the northern half of the region, especially around Westport. Many of these continued in operation until the mid-20th century, and several survive.

Timber has also long been a major industry, although in recent years there has been an uneasy balance between forestry for wood and forestry for conservation. Much of the region is public land administered by the Department of Conservation and the region has some of the best remaining stands of native forest, along with a wealth of rare wildlife. Ecotourism is now an important industry, and this goes hand in hand with the conservation efforts. 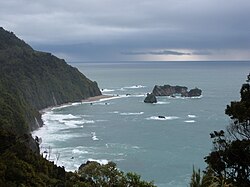 The proportion of people born overseas was 12.0%, compared with 27.1% nationally.

Although some people objected to giving their religion, 53.2% had no religion, 35.1% were Christian, and 3.1% had other religions.

There are only four towns with a population over 1,000: Greymouth, Westport, Hokitika and Runanga. These four towns, plus Reefton (population 900), are recognised as urban areas by Statisitcs New Zealand.

During the gold rush days, Hokitika had a population of more than 25,000 with more than 100 pubs. A recreation of an early New Zealand settlement is at Shantytown.

Other towns and settlements include:

The subnational gross domestic product (GDP) of the West Coast was estimated at NZ$1.86 billion in the year to March 2019, 0.6% of New Zealand's national GDP. The regional GDP per capita was estimated at $57,101 in the same period.

Industries include mining for coal and alluvial gold, forestry and wood processing, fishing (including whitebaiting), tourism and farming. Dairy farming has grown strongly – the local dairy co-operative Westland Milk Products remained independent when most others merged to form Fonterra in 2001. Other industries are the manufacturing and sales of greenstone jewellery, sphagnum moss gathering and stone-collection for garden landscaping. Monteith's brewery is in Greymouth. The region had one of the strongest growing regional economies of New Zealand in 2007, though from a rather small base.

The region has been included in the "Top 10 Coastal Drives of the World" by Lonely Planet.

The region has the only New Zealand nesting place of the kotuku (white heron), near Okarito Lagoon, visited by tours from the small farming township of Whataroa. This rare bird appears on the $2 coin.

Over 80% of West Coast land is administered by the Department of Conservation, much of this being in National Parks. These include from north to south, parts of Kahurangi NP, Paparoa NP, parts of Arthurs Pass NP, Westland NP, parts of Aspiring NP plus the South Westland World Heritage Area. Each of these parks have flora and fauna common to all areas, as well as species, like Kiwi, particular to those areas.

Flights and train journeys into the region