Archive page of the Main Page Did you know section
"WP:DYKA" redirects here. For the list of approved Did you know nominations, see WP:DYKNA.
Shortcut

This is a record of material that was recently featured on the Main Page as part of Did you know (DYK). Recently created new articles, greatly expanded former stub articles and recently promoted good articles are eligible; you can submit them for consideration.

Archives are generally grouped by month of Main Page appearance. (Currently, DYK hooks are archived according to the date and time that they were taken off the Main Page.) To find which archive contains the fact that appeared on Did you know, go to article's talk page and follow the archive link in the DYK talk page message box.

Reception to Washington on April 21, 1789, at Trenton by Wyeth

Great Hall of the Cunard Building

Exterior of the pilgrimage church

Sand sculpture of Chamundeshwari in Mysore

Jerusalem in 1839, from Roberts's The Holy Land

Memorial to the victims of
Leitmeritz concentration camp

Painting of the Shelton Oak 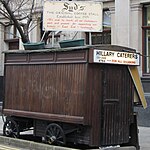