For other persons with a similar name, see William Lynch.

Captain William Francis Lynch (1 April 1801 – 17 October 1865), was a naval officer who served first in the United States Navy and later in the Confederate States Navy.

William F. Lynch was born in Virginia. On 2 June 1828, one month after his promotion to lieutenant, Lynch was married in New Haven, Connecticut, to Virginia Shaw, the youngest daughter of a senior navy officer and sister-in-law of another. They had two children, but separated in the 1840s and divorced in 1850s.

He was appointed a midshipman 26 January 1819, and first saw service with the USS Congress and next with the schooner USS Shark under Lieutenant Matthew C. Perry. Subsequent service included duty with Commodore David Porter's "Mosquito Squadron" in the West Indies and in the Mediterranean. 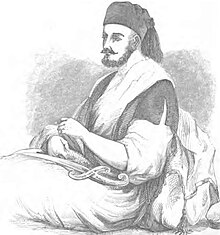 Lynch had his first command, the Poinsett, from 3 March to 30 December 1839. The ship sailed on behalf of the United States Naval Hydrographic Office. In 1847, he proceeded to the Jordan River, transporting overland, by camels, a copper and a galvanized iron boat. A total of 16 men were a part of the trip, including John Y. Mason. Each boat was "assembled" and then placed on a carriage. His expedition ended with the exploration of the River Jordan and the Dead Sea.

Using the triangulation method, Lynch's expedition was the first to determine that the Dead Sea was below sea level, something that the scientific community had inferred but not previously determined conclusively, though several other expeditions by Europeans had attempted to do so. The American expedition's measurement showed the Dead Sea to be 1312.7 ft. (400 metres) below sea level.

He published his travels in 1849, Narrative of the United States' Expedition to the River Jordan and the Dead Sea.

In 1849 he was commissioned commander and in 1850 was promoted to captain. In 1852, he requested permission to explore the interior of Africa for purposes of possible colonization. In his exploration in west central Africa, he caught a fever, and was forced to return to the United States. Lynch believed that explorers who "remove the obstruction to Commerce, Civilization and Christianity will become the benefactors of mankind."

The Command flag of Captain William F. Lynch, flew as the ensign of his flagship, the CSS Seabird, 1862

After Virginia seceded from the United States on 17 April 17, 1861, he resigned from the United States Navy on 21 April. Lynch was initially appointed captain in the Virginia Navy and when Virginia joined the Confederate States of America and merged its military, he became a captain in the Confederate States Navy on 10 June 1861. He commanded naval batteries at Aquia Creek, Virginia, during their shelling by Union gunboats in May 1861; was in charge of gunboats and the defense of Roanoke Island, North Carolina in February 1862; and led Confederate naval forces at Vicksburg, Mississippi from March to October 1862. He was also assigned to the Department of the Navy offices as the Chief of the Bureau of Orders and Details during 1862.

Later in command of ships in North Carolina waters, he commanded southern naval forces during the Union attack on Fort Fisher, in December 1864 and January 1865.

After the defeat of the Confederacy, he was paroled 3 May 1865 in Richmond, Virginia. He died in Baltimore, Maryland, on 17 October of the same year.

The USS Lynch (T-AGOR-7) was named after Lynch.

This article incorporates text from the public domain Dictionary of American Naval Fighting Ships. The entry can be found here.