Zonia Baber collecting fossils at Mazon Creek, Illinois as part of a Geology class in 1895 (University of Chicago Library).

As Baber's hometown did not offer education beyond elementary school, she moved 130 miles to Paris, Illinois to attend high school where she lived with her uncle. After high school, she attended "Normal school" to train as a teacher.

Baber started her career as a private school principal from 1886–1888. She then took a job teaching at Cook County Normal School (now Chicago State University), where she served as the head of the Geography Department from 1890–1899. She taught the interdependence of structural geography, history and the natural sciences. These courses focused on primarily geography, continental study, meteorology, and mathematical geography. While teaching, Baber also took classes in geology, including the first class that accepted women. She earned her Bachelor of Science in 1904.

When it came to teaching, Baber preferred to focus on field work – enabling her students to act and discover rather than memorize facts. Baber's teaching methods are still used today.

Baber promoted field trips and first-hand experience rather than the memorization of facts and definitions, but she also worked to improve conventional learning aids. During her time as chairwoman of the Women's International League for Peace and Freedom (WILPF), she created a committee to scrutinize textbooks in order to replace antiquated or inappropriate phrases and concepts with ones intended to stop the perpetuation of negative prejudices.

In 1920, Baber published "A Proposal for Renaming the Solar Circles in the Journal of Geography". The north and south solar tropics, traditionally referred to as the Tropic of Capricorn and the Tropic of Cancer, Baber proposed the name be changed to The Northern Tropic and The Southern Tropic. Today both terms are accepted in the world of geography, though no official change was made.

In 1898 Baber co-founded the Geographic Society of Chicago. She served as the President and was involved with the Society for 50 years. In 1948 she received a lifetime achievement award.

Zonia Baber was passionate about social issues throughout her life. As a feminist and anti-imperialist, she joined as well as initiated many efforts to fight against sexism, racism, and intolerance. She was an advocate of women's suffrage in the United States, and in 1926 she represented the women of Puerto Rico in the extension of suffrage to the region.

As previously mentioned, Baber served as chairwoman of the Women's International League for Peace and Freedom, as well as a member of the executive committee of the National Association for the Advancement of Colored People's (NAACP) Chicago branch, and as chair of the Race Relations Committee of the Chicago Women's Club Baber also traveled extensively—both for her professional career and for her advocacy work—to attend international conferences and events. One such occasion was when she traveled with a WILPF delegation to Haiti in 1926.

In 1896, Zonia Baber designed a new school desk with features specifically for the teaching of geography and other sciences. Unlike a regular school desk, Zonia's featured trays and compartments meant to store learning supplies. Having these trays and compartments meant that students using her desk would always have their learning supplies at hand. 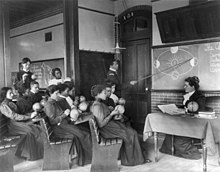 'Conservation of important geographical areas for educational purposes,' The Journal of Geography 11, p. 287 (1913).

'Moral Issues,' in The Negro Problems of the Community to the West, Report of the Commission on Intercommunity relationships of the Hyde Park-Kentwood Council of Churches and Synagogues, p. 28 (1940).