For the American sport, see American football. For other sports known as football, see Football 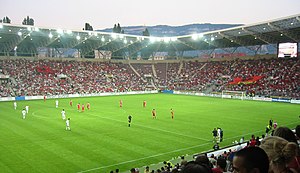 Switzerland and Albania playing in a football match 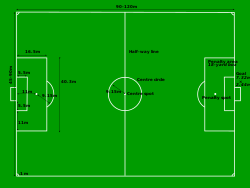 There were various attempts to codify the rules of football in England in the mid-19th century. The present laws date from 1863 when a set of rules was adopted in Rugby, Warwickshire by the newly formed Football Association.

Each team has 11 players on the field. One of these players is the goalkeeper, and the other ten are known as "outfield players". The game is played by kicking a ball into the opponent's goal. A match has 90 minutes of play, with a break of 15 minutes during the match. The break in the middle is called half-time. Added time may be added after half time or after 90 minutes to make up for time lost during the game because of fouls, free kicks, corner kicks, injuries, bookings, substitutions or any other time the game is stopped. If a match ends in a tie, extra-time with two halves of 15 minutes each may be played, and if there is still a tie, a penalty shootout decides the winner. Sometimes extra-time is skipped and the game goes right into the penalty shootout.

In football, the fundamental purpose of the fans is to encourage their team during the match.

There are many competitions for football, for both football clubs and countries. Football clubs usually play other teams in their own country, with a few exceptions. Here are a list of some of those exceptions:

There are 6 associations (CONCACAF, CONMEBOL, CAF, UEFA, AFC, and OFC). Each association has their own continental competition between clubs and national teams. Some examples are the Copa América for CONMEBOL national teams and the Copa Libertadores for CONMEBOL clubs. FIFA organises international competitions between worldwide clubs and countries. Clubs play in the Club World Cup, and countries play for the FIFA World Cup.

The FIFA World Cup takes place every four years between national teams, and is the world's most popular sporting event, even more popular than the Olympic Games. In football, there are two main competition types. In a "league", all of the teams play the same number of games, but in a "cup", teams leave the competition when they lose, until the last two teams play each other to decide the winner.

Football is the world's most popular sport. It is played in more countries than any other game. In fact, FIFA (the Federation Internationale de Football Association) has more members than the United Nations. It was originally an all-male sport, but today it is played by both males and females (separately, except sometimes at primary school level).

In Europe, the main competitions to compete are the Champions League for the top teams from the top leagues in each country in Europe. Then there is the UEFA Europa League which is for the next best teams from each member country of the UEFA.

The most successful club in the world, in terms of domestic league results, is Rangers F.C. from Scotland, who have won more domestic league titles than any other team in the world. They have won the country's league 54 times which is a world record. In May 2000, Rangers became the first team to win 100 trophies. Other successful clubs are FC Barcelona and Real Madrid from Spain, Bayern Munich and Borussia Dortmund from Germany, Galatasaray S.K. from Turkey, Juventus and Napoli from Italy, Liverpool and Manchester City from England, Paris Saint-Germain from France, and Al Ahly from Egypt.

Note: this is not a complete summary