Guthlac Ceri Klaus Peach (26 October 1939 - 2 October 2018) was a geographer from Bridgend, Wales. He was an undergraduate (BA 1961), graduate student (DPhil, 1964), and lecturer at Merton College, Oxford before being appointed to a lectureship in geography at St Catherine's College, Oxford (known colloquially as St Catz) in 1965 at the age of 26. He held this post jointly with a lectureship at Keble College, Oxford and a Faculty Lectureship at the University of Oxford.

He was elected as a tutorial fellow (teaching fellow) in geography at St Catherine's in 1969 and also held various non-teaching posts, including several college offices: Domestic Bursar, Senior Tutor, Finance Bursar and Acting Master. During his tenure as Senior Tutor, women were first admitted to the college. As Domestic Bursar, he negotiated college charges with the then Junior Common Room President, Peter Mandelson.

He was Professor of Social geography at the School of Geography and the Environment, University of Oxford from 1992 to 2007 and on retirement from his Oxford chair he was appointed Professor of at the Institute for Social Change at the University of Manchester. 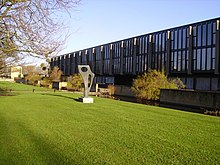 Other graduates in geography taught by Peach at St Catherine's have achieved success in other fields and include Matthew Pinsent, who received four gold medals for rowing in successive Olympic Games.

Peach's main field of research is human migration and the racial segregation of minority groups, ethnic groups and religious groups in the United Kingdom, the United States and Western Europe.

During his sabbatical at the Demography Department of Australian National University, in 1973, his understanding of the relationship between spatial patterns of residential segregation was transformed. This led him to investigate ethnic intermarriage as an index of social interaction.

During his next sabbatical at Yale University, in 1977, he disproved the 'triple melting pot theory' of American cultural assimilation which, based on data collection in New Haven, Connecticut, argued that while national ethnic identity in the United States would dissolve, it would do so within maintained religious boundaries of Catholic, Protestant and Jewish. His research proved that while the so-called 'Protestant pot' seemed plausible, a 'Catholic-pot' seemed unlikely:

His research in the 1970s and 1980s focused on housing tenure and segregation in the United Kingdom and the United States and during this time he worked closely with Dr Samir Shah and later with Dr Margaret Byron.

In the 1990s and 2000s Peach continued his research on issues of segregation with particular focus on the dynamics relating to, and the arguments surrounding, Ghetto formation and White flight. This included differences between British and American cities and whether British cities had become more segregated than Chicago. He also examined the growth of the Muslim population in Europe, and particularly in Britain, and this has developed into a large scale study of the cultural geography of Muslim mosques, Sikh Gurdwaras and Hindu Mandirs on the landscape of Britain.

His Economic and Social Research Council funded project on ethno-religio-linguistic sub-communities links his database on Muslim, Hindu and Sikh places of worship in the United Kingdom, completed as a millennium project, and funded by the Leverhulme Trust, with the United Kingdom Census 2001 data on ethnicity and religion. The Leverhulme survey photographed and collected data on religion, tradition, movements, vernacular language, date of foundation and other variables on nearly 1,000 buildings. Peach is a member of the Advisory Board of the Oxford Centre for Islamic Studies and the Oxford Centre for Hindu Studies.

On 22 September 2007 Ceri Peach retired from St Catherine’s College and became an emeritus fellow at the College. a series of talks were given by former pupils and colleagues at the Oxford University Centre for the Environment on 22 September followed by a reception and speeches by professors Ron J. Johnston and Gary Bridge. St Catherine's has created the Ceri Peach Trust Fund to honour the 40 years' contribution Peach has made to the study of geography, and to ensure that geography continues to flourish at the college.

Recalling his time at the college Peach remarked:

In 2008, the BBC reported that, along with Ludi Simpson and Danny Dorling, Peach is considered to be one of the top three British thinkers in the field of racial segregation. In the same year, he was nominated as "Ethnic Geography Distinguished Scholar of 2008" by the Association of American Geographers at their April meeting in Boston.

In 2016, Peach was awarded a Doctorate of Letters by the University of Oxford, which is one of the highest academic honors that the University may confer. It was given in recognition of contribution he has made to academia throughout his career, particularly to his main field of research in human migration and the racial segregation of minority groups, ethnic groups and religious groups in the United Kingdom, United States and Western Europe.

Selected co-authored, or co-edited, publications include:

Outside his research interests, Peach has maintained a keen interest in rowing: