This article is about the electronics form factor. For other uses, see Clamshell (disambiguation). 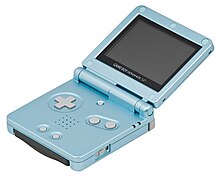 The clamshell form factor is based on the hinged design of the clam.

The flip or clamshell is a form factor of a mobile phone or other device which is in two or more sections that fold via a hinge. If the hinge is on a long edge the device is more likely to be called clamshell than flip phone (e.g., Nokia Communicators).

Generally speaking, the interface components such as keys and display are kept inside the closed clamshell, protecting them from damage and unintentional use while also making the device shorter or narrower so it is easier to carry around. In many cases, opening the clamshell offers more surface area than when the device is closed, allowing interface components to be larger and easier to use than on devices which do not flip open. A disadvantage of the clamshell design is the connecting hinge, which is prone to fatigue or failure.

A reference to a flip phone style communicator is referenced in chapter 3 of "Armageddon 2419 A.D." a science fiction novella by Philip Francis Nowlan which first appeared in the August 1928 issue of the pulp magazine Amazing Stories. The device is described in the following quoted passage "Alan took a compact packet about six inches square from a holster attached to her belt and handed it to Wilma. So far as I could see, it had no special receiver for the ear. Wilma merely threw back a lid, as though she was opening a book, and began to talk. The voice that came back from the machine was as audible as her own."

The form factor was first used by the laptop manufacturer GRiD (who had the patents on the idea at the time) for their Compass model in 1982. In 1983, the Ampere WS-1 laptop used a modern clamshell design.

The first Motorola model to support the clamshell design was the MicroTAC, created in 1989, although General Telephone & Electronics (GTE) held the trademark from the 1970s for its Flip-Phone (one of the first small hand-held electronic phones), until 1993. The clamshell form factor began to experience a decline in popularity in the late-2000s, due to the increasing popularity of touchscreen smartphones such as the iPhone, which use a slate-like form factor and large, non-folding screens. Clamshells remain a predominant form factor for feature phones—which remain popular among specialized audiences who prefer their simplicity or durability over smartphones. Samsung also released a low-end smartphone in South Korea known as the Galaxy Folder, which has a flip phone design and keypad reminiscent of feature phones whilst running Android.

In the late-2010s, a new trend of foldable smartphones using rollable OLED displays began to emerge: the Samsung Galaxy Fold uses a clamshell form factor with a vertical fold and a small secondary screen on its cover, and exposing a larger, tablet-like screen when opened. Motorola unveiled a reimagining of the Motorola Razr in November 2019, which uses a foldable display and a clamshell design reminiscent of its namesake line of feature phones. 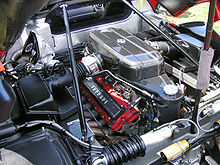 Open clamshell of a Ferrari Enzo

In automotive design, a clamshell bonnet or clamshell hood describes a design where the engine cover also incorporates all or part of one of the wings (fenders). It is common in cars based on a spaceframe where the bodywork is lightweight and carries no significant loading, such as the Ford GT40 and Ferrari Enzo, where the whole rear end can be lifted to access the engine compartment and suspension system. It is also sometimes seen in unibody cars, albeit much more rarely - such as the BMW Minis and Alfa Romeo GTV.

It is also an informal name for General Motors full-size station wagons, manufactured from 1971 to 1976, that featured a complex, two-piece "disappearing" tailgate, officially known as the "Glide Away" tailgate.

Besides smartphones, devices using the flip form include laptop computers, subnotebooks, the Game Boy Advance SP, the Nintendo DS, and the Nintendo 3DS, though these are less frequently described as "flip" or "clamshell" compared to smartphones.

Bookbinders build archival "clamshell" boxes called Solander cases, in which valuable books or loose papers can be protected from light and dust.