This article is about the basic degree normally below a Bachelor's degree. For the advanced academic degree, see Diplom.

A diploma is a certificate or deed issued by an educational institution, such as college or university, that testifies that the recipient has successfully completed a particular course of study. The word diploma also refers to an academic award which is given after the completion of study in different courses such as diploma in higher education, diploma in graduation or diploma in post graduation etc. Historically, it can also refer to a charter or official document, thus diplomatic, diplomat and diplomacy via the Codex Juris Gentium Diplomaticus.

The term diploma is also used in some historical contexts, to refer to documents signed by a King affirming a grant or tenure of specified land and its conditions (see Anglo-Saxon Charters and Diplomatics). 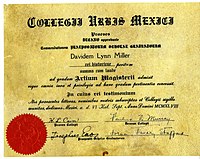 In Australia, there are three varieties of Diploma currently recognized by the Australian Qualifications Framework (AQF):

In Ontario, Canada, diplomas are two and three year academic post-secondary programs taught by colleges and institutes of applied studies, arts, and technology. Two year programs are referred to as college diplomas, while three year programs are called Ontario College Advanced Diplomas. Baccalaureate degrees in Ontario are commonly a year longer than an Advanced Diploma and are offered by both colleges and universities.

Germany and the German academic education system in Europe

For more detailed information about the German Diploma, see Diplom.

In Germany, Ukraine, Serbia, Croatia, Hungary and other countries that adopted the German academic education system, diploma (in German Diplom) is the standard academic degree, needing at least 3.5 years to complete it, being comparable with a Bachelor's and Master's degree in one.

In Greece, diplomas can be awarded by educational institutes as a proof of a certain educational level. The diploma in engineering is a degree provided by Greek technical universities and universities after the successful completion of a five-year integrated study program and it is equivalent to the Master of Engineering degree, which is awarded by the European universities. 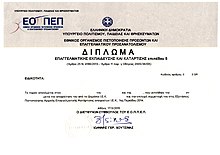 Postgraduate Certificates and Postgraduate Diplomas are usually granted after the bachelor's degree. It's more vocational oriented than a master's degree.

Postgraduate Diploma or PGD are ranked higher than the Bachelor's degree as they are completed after graduation. These are normally a year's worth of coursework after a university degree.

In the Republic of Ireland, a National Diploma was awarded before 2004. It was at the same level as the ordinary bachelor's degree and below the honours Bachelor's degree, whilst the Higher Diploma is taken after the bachelor's degree. There is BTEC Extended Diploma also after which one gets progression to a Degree (University).

In Mexico and other Latin American countries, a diploma may be awarded for short courses of vocational training. The university-issued diplomas finalizing higher education are most often called título (title) or certificado (certificate). A "Diplomado" can also be a short, specialized executive education program for experienced professionals.

Postgraduate Diploma or PGD are ranked higher than the Bachelor's degree as they are completed after graduation. These are normally a year's worth of coursework after a university degree.

In Singapore, most diplomas are awarded after a three-year course, offered by the various polytechnics (e.g. Nanyang Polytechnic, Singapore Polytechnic, etc.) or the two arts institutions (e.g. Nanyang Academy of Fine Arts, LaSalle College of the Arts). Other private schools also offer diploma programmes for just one year. (e.g. Kaplan / MDIS/ PSB Academy) In Singapore, a diploma helps people get jobs to start careers. However, many people are not satisfied with the diploma and move on to pursue their bachelor's degree. Diplomas in Singapore are well recognised by various other countries, due to Singapore's high standards of education.

In the Kingdom of Spain, university diplomas are issued in the name of the King. As such, they are Public Official documents, strictly regulated and protected by the law. They are internationally recognized by the Hague Convention of October 5, 1961.

Some universities may offer other qualifications, such as the University of Cambridge's Undergraduate Diploma (a 1-year, part-time cost at the same level as a Diploma of Higher Education) and Undergraduate Advanced Diploma.

The document certifying the award of a degree is normally called a degree certificate in the UK, and details are printed in English, not in Latin.

The Undergraduate Advanced Diploma (UGAdvDip or UGAD) is a FHEQ Level 6 award, the academic level is the equivalent to the final year of a bachelor's degree and a Graduate Diploma. An advanced diploma prepares students to enter into a specific career or further study in an advanced degree, like a Master of Arts. After graduated form an Undergraduate Advanced Diploma, it enables student to apply for postgraduate studies such as Master's degree or Postgraduate Diploma. Most are offered on a part-time basis, except for pre-masters program such as Undergraduate Advanced Diploma in British & European Studies at the Department for Continuing Education of the University of Oxford. Students are eligible to apply for College Associate Membership (optional).

In the US, the word diploma usually refers to the actual document received at the end of high school, undergraduate studies, or graduate/professional school. This can lead to some confusion when persons who obtained US degrees are presenting their academic credentials in other countries.

Diploma also can refer to a specific academic or training award. An example of the former is in the field of Nursing where the Diploma in Nursing was offered by hospital based schools.

In an even wider fashion, a diplomat can refer to a person holding a specific accreditation. It can also mean that colleges will be willing to accept somebody in freshman year of college.

The International Baccalaureate (IB) Diploma is a pre-university qualification normally taken by students in the final two years of high school.

Uses material from the Wikipedia article "Diploma", released under the CC BY-SA 3.0 license.