Jewish sect during the Second Temple period
"Essene" redirects here. For the bread developed by the Essenes, see sprouted bread.

The Jewish historian Josephus records that Essenes existed in large numbers, and thousands lived throughout Roman Judaea, but they were fewer in number than the Pharisees and the Sadducees, the other two major sects at the time. The Essenes lived in various cities but congregated in communal life dedicated to voluntary poverty, daily immersion, and asceticism (their priestly class practiced celibacy). Most scholars claim they seceded from the Zadokite priests.

The Essenes have gained fame in modern times as a result of the discovery of an extensive group of religious documents known as the Dead Sea Scrolls, which are commonly believed to be the Essenes' library. These documents preserve multiple copies of parts of the Hebrew Bible untouched from possibly as early as 300 BCE until their discovery in 1946. Most scholars dispute the notion that the Essenes wrote the Dead Sea Scrolls. Rachel Elior questions even the existence of the Essenes.

The first reference to the sect is by the Roman writer Pliny the Elder (died c. 79 CE) in his Natural History. Pliny relates in a few lines that the Essenes possess no money, had existed for thousands of generations, and that their priestly class (“contemplatives”) do not marry. Unlike Philo, who did not mention any particular geographical location of the Essenes other than the whole land of Israel, Pliny places them somewhere above Ein Gedi, next to the Dead Sea.

Josephus later gave a detailed account of the Essenes in The Jewish War (c. 75 CE), with a shorter description in Antiquities of the Jews (c. 94 CE) and The Life of Flavius Josephus (c. 97 CE). Claiming firsthand knowledge, he lists the Essenoi as one of the three sects of Jewish philosophy alongside the Pharisees and the Sadducees. He relates the same information concerning piety, celibacy, the absence of personal property and of money, the belief in communality, and commitment to a strict observance of Sabbath. He further adds that the Essenes ritually immersed in water every morning, ate together after prayer, devoted themselves to charity and benevolence, forbade the expression of anger, studied the books of the elders, preserved secrets, and were very mindful of the names of the angels kept in their sacred writings.

Pliny, also a geographer, located them in the desert near the northwestern shore of the Dead Sea, where the Dead Sea Scrolls were discovered.

Josephus uses the name Essenes in his two main accounts, The Jewish War 2.119, 158, 160 and Antiquities of the Jews, 13.171–2, but some manuscripts read here Essaion ("holding the Essenes in honour"; "a certain Essene named Manaemus"; "to hold all Essenes in honor"; "the Essenes").

Philo's usage is Essaioi, although he admits this Greek form of the original name, that according to his etymology signifies "holiness", to be inexact. Pliny's Latin text has Esseni.

Gabriele Boccaccini implies that a convincing etymology for the name Essene has not been found, but that the term applies to a larger group within Palestine that also included the Qumran community.

It was proposed before the Dead Sea Scrolls were discovered that the name came into several Greek spellings from a Hebrew self-designation later found in some Dead Sea Scrolls, ʻosey haTorah, "'doers' or 'makers' of Torah". Although dozens of etymology suggestions have been published, this is the only etymology published before 1947 that was confirmed by Qumran text self-designation references, and it is gaining acceptance among scholars. It is recognized as the etymology of the form Ossaioi (and note that Philo also offered an O spelling) and Essaioi and Esseni spelling variations have been discussed by VanderKam, Goranson, and others. In medieval Hebrew (e.g. Sefer Yosippon) Hassidim "the Pious" replaces "Essenes". While this Hebrew name is not the etymology of Essaioi/Esseni, the Aramaic equivalent Hesi'im known from Eastern Aramaic texts has been suggested. Others suggest that Essene is a transliteration of the Hebrew word ḥiṣonim (ḥiṣon "outside"), which the Mishnah (e.g. Megillah 4:8) uses to describe various sectarian groups. Another theory is that the name was borrowed from a cult of devotees to Artemis in Anatolia, whose demeanor and dress somewhat resembled those of the group in Judea.

Flavius Josephus in Chapter 8 of "The Jewish War" states: 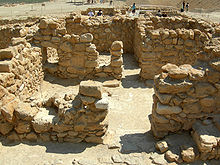 Remains of part of the main building at Qumran.

According to Josephus, the Essenes had settled "not in one city" but "in large numbers in every town". Philo speaks of "more than four thousand" Essaioi living in "Palestine and Syria", more precisely, "in many cities of Judaea and in many villages and grouped in great societies of many members".

Pliny locates them "on the west side of the Dead Sea, away from the coast... [above] the town of Engeda".

Some modern scholars and archaeologists have argued that Essenes inhabited the settlement at Qumran, a plateau in the Judean Desert along the Dead Sea, citing Pliny the Elder in support, and giving credence that the Dead Sea Scrolls are the product of the Essenes. This theory, though not yet conclusively proven, has come to dominate the scholarly discussion and public perception of the Essenes.

The accounts by Josephus and Philo show that the Essenes led a strictly communal life—often compared to later Christian monasticism. Many of the Essene groups appear to have been celibate, but Josephus speaks also of another "order of Essenes" that observed the practice of being engaged for three years and then becoming married. According to Josephus, they had customs and observances such as collective ownership, electing a leader to attend to the interests of the group, and obedience to the orders from their leader. Also, they were forbidden from swearing oaths and from sacrificing animals. They controlled their tempers and served as channels of peace, carrying weapons only for protection against robbers. The Essenes chose not to possess slaves but served each other and, as a result of communal ownership, did not engage in trading. Josephus and Philo provide lengthy accounts of their communal meetings, meals and religious celebrations. This communal living has led some scholars to view the Essenes as a group practicing social and material egalitarianism.

After a three-year probationary period, newly joining members would take an oath that included the commitment to practice piety towards God (το θειον) and righteousness towards humanity, to maintain a pure lifestyle, to abstain from criminal and immoral activities, to transmit their rules uncorrupted and to preserve the books of the Essenes and the names of the angels. Their theology included belief in the immortality of the soul and that they would receive their souls back after death. Part of their activities included purification by water rituals, which was supported by rainwater catchment and storage. According to the Community Rules, repentance was a prerequisite to baptism: "They shall not enter the water... for they will not be cleansed unless they have turned from their evil."

Ritual purification was a common practice among the peoples of Judea during this period and was thus not specific to the Essenes. A ritual bath or mikveh was found near many synagogues of the period continuing into modern times. Purity and cleanliness was considered so important to the Essenes that they would refrain from defecation on the Sabbath.

According to Joseph Lightfoot, the Church Father Epiphanius (writing in the 4th century CE) seems to make a distinction between two main groups within the Essenes: "Of those that came before his [Elxai, an Ossaean prophet] time and during it, the Ossaeans and the Nasaraeans."Part 18 Epiphanius describes each group as following:

The Nasaraeans or Nasoraeans may be the same as the Mandaeans of today. Epiphanius says (29:6) that they existed before Christ. That is questioned by some, but others accept the pre-Christian origin of this group.

Josephus and Philo discuss the Essenes in detail. Most scholars believe that the community at Qumran that allegedly produced the Dead Sea Scrolls was an offshoot of the Essenes. However, this theory has been disputed by some; for example, Norman Golb argues that the primary research on the Qumran documents and ruins (by Father Roland de Vaux, from the École Biblique et Archéologique de Jérusalem) lacked scientific method, and drew wrong conclusions that comfortably entered the academic canon. For Golb, the number of documents is too extensive and includes many different writing styles and calligraphies; the ruins seem to have been a fortress, used as a military base for a very long period of time—including the 1st century—so they therefore could not have been inhabited by the Essenes; and the large graveyard excavated in 1870, just 50 metres (160 ft) east of the Qumran ruins, was made of over 1200 tombs that included many women and children; Pliny clearly wrote that the Essenes who lived near the Dead Sea "had not one woman, had renounced all pleasure... and no one was born in their race". Golb's book presents observations about de Vaux's premature conclusions and their uncontroverted acceptance by the general academic community. He states that the documents probably stemmed from various libraries in Jerusalem, kept safe in the desert from the Roman invasions. Other scholars refute these arguments—particularly since Josephus describes some Essenes as allowing marriage.

Another issue is the relationship between the Essaioi and Philo's Therapeutae and Therapeutrides. He regarded the Therapeutae as a contemplative branch of the Essaioi who, he said, pursued an active life.

One theory on the formation of the Essenes suggests that the movement was founded by a Jewish high priest, dubbed by the Essenes the Teacher of Righteousness, whose office had been usurped by Jonathan (of priestly but not of Zadokite lineage), labeled the "man of lies" or "false priest". Others follow this line and a few argue that the Teacher of Righteousness was not only the leader of the Essenes at Qumran, but was also identical to the original Messianic figure about 150 years before the time of the Gospels. Fred Gladstone Bratton notes that

Lawrence Schiffman has argued that the Qumran community may be called Sadducean, and not Essene, since their legal positions retain a link with Sadducean tradition.

Retrieved from "https://en.wikipedia.org/w/index.php?title=Essenes&oldid=1008884140"
Uses material from the Wikipedia article Essenes, released under the CC BY-SA 3.0 license.