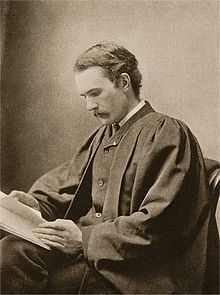 George Gilbert Aimé Murray OM FBA (2 January 1866 – 20 May 1957) was an Australian-born British classical scholar and public intellectual, with connections in many spheres. He was an outstanding scholar of the language and culture of Ancient Greece, perhaps the leading authority in the first half of the twentieth century. He is the basis for the character of Adolphus Cusins in his friend George Bernard Shaw's play Major Barbara, and also appears as the chorus figure in Tony Harrison's play Fram.

He was a prominent humanist, and served as President of the Ethical Union (now Humanists UK) from 1929-1930 and was a delegate at the inaugural World Humanist Congress in 1952 which established Humanists International.

Murray was born in Sydney, Australia. His father, Sir Terence Aubrey Murray, who died in 1873, had been a Member of the New South Wales Parliament; Gilbert's mother, Agnes Ann Murray (née Edwards), ran a girls' school in Sydney for a few years. Then, in 1877, Agnes emigrated with Gilbert to the UK, where she died in 1891.

Murray was educated at Merchant Taylors' School and St John's College, Oxford. He distinguished himself in writing in Greek and Latin: he won all the prizes awarded by Oxford.

From 1889–1899, Murray was Professor of Greek at the University of Glasgow. There was a break in his academic career from 1899 to 1905, when he returned to Oxford; he interested himself in dramatic and political writing. After 1908 he was Regius Professor of Greek at the University of Oxford. In the same year he invited Ulrich von Wilamowitz-Moellendorff to Oxford, where the Prussian philologist delivered two lectures: Greek Historical Writing and Apollo (later, he would replicate them in Cambridge).

From 1925–1926 Murray was the Charles Eliot Norton Lecturer at Harvard University.

Murray is perhaps now best known for his verse translations of Greek drama, which were popular and prominent in their time. As a poet he was generally taken to be a follower of Swinburne and had little sympathy from the modernist poets of the rising generation. The staging of Athenian drama in English did have its own cultural impact. He had earlier experimented with his own prose dramas, without much success.

Over time he worked through almost the entire canon of Athenian dramas (Aeschylus, Sophocles, Euripides in tragedy; Aristophanes in comedy). From Euripides, the Hippolytus and The Bacchae (together with The Frogs of Aristophanes; first edition, 1902); the Medea, Trojan Women, and Electra (1905–1907); Iphigenia in Tauris (1910); The Rhesus (1913) were presented at the Court Theatre, in London. In the United States Granville Barker and his wife Lillah McCarthy gave outdoor performances of The Trojan Women and Iphigenia in Tauris at various colleges (1915).

The translation of Œdipus Rex was a commission from W. B. Yeats. Until 1912 this could not have been staged for a British audience. Murray was drawn into the public debate on censorship that came to a head in 1907 and was pushed by William Archer, whom he knew well from Glasgow, George Bernard Shaw, and others such as John Galsworthy, J. M. Barrie and Edward Garnett. A petition was taken to Herbert Gladstone, then Home Secretary, early in 1908.

He was one of the scholars associated with Jane Harrison in the myth-ritual school of mythography. They met first in 1900. He wrote an appendix on the Orphic tablets for her 1903 book Prolegomena; he later contributed to her Themis (1912).

He was a lifelong supporter of the Liberal Party, lining up on the Irish Home Rule and non-imperialist sides of the splits in the party of the late nineteenth century. He supported temperance, and married into a prominent Liberal, aristocratic and temperance family, the Carlisles. He made a number of moves that might have taken him into parliamentary politics, initially by tentative thoughts about standing in elections during the 1890s. In 1901-2 he was in close contact with the Independent Labour Party. But the overall effect of the Second Boer War was to drive him back into the academic career he had put on hold in 1898, resigning his Glasgow chair (effective from April 1899).

He stood five times unsuccessfully for the University of Oxford constituency between 1919 and 1929. He continued support for the Asquith faction of Liberals, after the party was split again by Lloyd George. During the 1930s the Liberals as a party were crushed electorally, but Liberal thinkers continued to write; Murray was one of the signatory Next Five Years Group formed around Clifford Allen.

The International Committee on Intellectual Cooperation of the League of Nations in 1939, chaired by Murray (at the central table).

As Regius Professor and literary figure, he had a platform to promote his views, which were many-sided but Whig-liberal. In 1912 he wrote an introduction to The Great Analysis: A Plea for a Rational World-Order, by his friend William Archer.

During World War I he became a pamphleteer, putting a reasoned war case. He also defended C. K. Ogden against criticism, and took a public interest in conscientious objection. Murray never took a pacifist line himself, broke an old friendship with Bertrand Russell early in the war, and supported British intervention in the Suez Crisis.

He was also involved as an internationalist in the League of Nations. He was a Vice-President of the League of Nations Society from 1916, and in 1917 wrote influential articles in the Daily News. At the invitation of Jan Smuts he acted in 1921/2 as a League delegate for South Africa. He was an influential member of the International Committee on Intellectual Cooperation of the League from 1922 to 1939, being its president from 1928 to 1939.

Later he was a major influence in the setting-up of Oxfam and of the Students' International Union (later the Institute of World Affairs).

For a brief period Murray became closely involved with the novelist H. G. Wells. Initially this was in 1917 and connection with groups supporting a future League: Wells promoted a League of Free Nations Association (LFNA), an idea not in fact exclusive to him, since it had been 'up in the air' since Woodrow Wilson had started considering post-war settlements. Wells applied through the British propaganda office with which Murray had been connected since 1914. The two men corresponded from 1917 about League matters. Wells was bullish about pushing ahead with a British LFNA, Murray was involved already in the League of Nations Society (LNS), though not active. The political position was delicate, as Murray understood and Wells may not have: the LNS overlapped with the Union of Democratic Control, which was too far towards the pacifist end of the spectrum of opinion to be effective in that time and context. Eventually in 1918 the LFNA was set up around Welsh Liberal MP David Davies, and then shortly the LFNA and LNS merged as the League of Nations Union.

Two years later, Wells called on Murray, and Murray's New College colleague Ernest Barker, to lend their names as advisers on his The Outline of History. Their names duly appeared on the title page. Murray had to give evidence in the plagiarism case Deeks v. Wells that arose in 1925.

Murray held a deep interest in psychical research. Between 1916 and 1924, he conducted 236 experiments into telepathy and reported 36% as successful, although it was suggested that the results could be explained by hyperaesthesia as he could hear what was being said by the sender.

Murray is often identified as a humanist, typically with some qualification ('classical', 'scholarly', 'engaged', 'liberal'). He joined the Rationalist Press Association, and in 1952 attended the World Humanist Congress. He wrote and broadcast extensively on religion (Greek, Stoic and Christian); and wrote several books dealing with his version of humanism. He was President of the British Ethical Union (now Humanists UK) from 1929-1930.

A phrase from his 1910 lectures Four Stages of Greek Religion enjoyed public prominence: the "failure of nerve" of the Hellenistic world, of which a turn to irrationalism was symptomatic.

Murray was baptised as a Roman Catholic; his father was a Catholic, his mother a Protestant. His daughter Rosalind (later Rosalind Toynbee), a Catholic convert, attacked his secularism in her book of apologetics, The Good Pagan's Failure (1939). About a month before he died, when he was bedridden, his daughter Rosalind called the local Catholic priest to see him. In an article in The Times following his death, however, his son Stephen made clear that Rosalind and Catholic friends did 'not want it thought that they claim he died a Roman Catholic'. Stephen said that his sister 'would not dream of making a public claim that he would re-enter the Church.'

He refused a knighthood in 1912, though he was appointed to the Order of Merit in 1941. He received honorary degrees from Glasgow, Birmingham, and Oxford.

He gave the 1941 Andrew Lang lecture.

Minor planet 941 Murray is named after him, for his support of Austria after World War I.

Murray married Lady Mary Henrietta Howard (1865–1956), daughter of George Howard, 9th Earl of Carlisle. When her mother Rosalind Howard, Countess of Carlisle died in 1921, Castle Howard was left to Lady Mary. However, she passed it on to her surviving brother Geoffrey, retaining an estate in Cumberland with an income of c£5,000pa.

The four children were evacuated during the Second World War from London to the Sands House Hotel, Brampton, Cumberland, which was converted to temperance status by Lady Rosalind, and run by Mrs and Mrs James Warwick, formerly in her service, with their daughter Charlotte Elizabeth. She became an enduring friend of the boys and an unfinished letter to her was found on Gilbert's body after the accident.