For other uses, see Insecticide (disambiguation).
For broader coverage of this topic, see Pesticide. 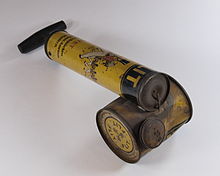 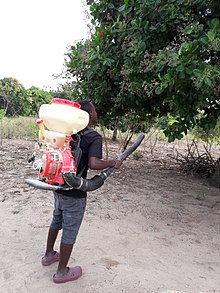 Farmer spraying an insecticide on a cashewnut tree in Tanzania

Insecticides are substances used to kill insects. They include ovicides and larvicides used against insect eggs and larvae, respectively. Insecticides are used in agriculture, medicine, industry and by consumers. Insecticides are claimed to be a major factor behind the increase in the 20th-century's agricultural productivity. Nearly all insecticides have the potential to significantly alter ecosystems; many are toxic to humans and/or animals; some become concentrated as they spread along the food chain.

The mode of action describes how the pesticide kills or inactivates a pest. It provides another way of classifying insecticides. Mode of action can be important in understanding whether an insecticide will be toxic to unrelated species, such as fish, birds and mammals.

Insecticides may be repellent or non-repellent. Social insects such as ants cannot detect non-repellents and readily crawl through them. As they return to the nest they take insecticide with them and transfer it to their nestmates. Over time, this eliminates all of the ants including the queen. This is slower than some other methods, but usually completely eradicates the ant colony.

Insecticides are distinct from non-insecticidal repellents, which repel but do not kill.

Systemic insecticides become incorporated and distributed systemically throughout the whole plant. When insects feed on the plant, they ingest the insecticide. Systemic insecticides produced by transgenic plants are called plant-incorporated protectants (PIPs). For instance, a gene that codes for a specific Bacillus thuringiensis biocidal protein was introduced into corn (maize) and other species. The plant manufactures the protein, which kills the insect when consumed.

Efficacy can be related to the quality of pesticide application, with small droplets, such as aerosols often improving performance.

Many organic compounds are produced by plants for the purpose of defending the host plant from predation. A trivial case is tree rosin, which is a natural insecticide. Specifically, the production of oleoresin by conifer species is a component of the defense response against insect attack and fungal pathogen infection. Many fragrances, e.g. oil of wintergreen, are in fact antifeedants.

Four extracts of plants are in commercial use: pyrethrum, rotenone, neem oil, and various essential oils

Transgenic crops that act as insecticides began in 1996 with a genetically modified potato that produced the Cry protein, derived from the bacterium Bacillus thuringiensis, which is toxic to beetle larvae such as the Colorado potato beetle. The technique has been expanded to include the use of RNA interference RNAi that fatally silences crucial insect genes. RNAi likely evolved as a defense against viruses. Midgut cells in many larvae take up the molecules and help spread the signal. The technology can target only insects that have the silenced sequence, as was demonstrated when a particular RNAi affected only one of four fruit fly species. The technique is expected to replace many other insecticides, which are losing effectiveness due to the spread of pesticide resistance.

Many plants exude substances to repel insects. Premier examples are substances activated by the enzyme myrosinase. This enzyme converts glucosinolates to various compounds that are toxic to herbivorous insects. One product of this enzyme is allyl isothiocyanate, the pungent ingredient in horseradish sauces.

Biosynthesis of antifeedants by the action of myrosinase.

The myrosinase is released only upon crushing the flesh of horseradish. Since allyl isothiocyanate is harmful to the plant as well as the insect, it is stored in the harmless form of the glucosinolate, separate from the myrosinase enzyme.

Bacillus thuringiensis is a bacterial disease that affects Lepidopterans and some other insects. Toxins produced by strains of this bacterium are used as a larvicide against caterpillars, beetles, and mosquitoes. Toxins from Saccharopolyspora spinosa are isolated from fermentations and sold as Spinosad. Because these toxins have little effect on other organisms, they are considered more environmentally friendly than synthetic pesticides. The toxin from B. thuringiensis (Bt toxin) has been incorporated directly into plants through the use of genetic engineering. Other biological insecticides include products based on entomopathogenic fungi (e.g., Beauveria bassiana, Metarhizium anisopliae), nematodes (e.g., Steinernema feltiae) and viruses (e.g., Cydia pomonella granulovirus).

A major emphasis of organic chemistry is the development of chemical tools to enhance agricultural productivity. Insecticides represent a major area of emphasis. Many of the major insecticides are inspired by biological analogues. Many others are completely alien to nature.

The best known organochloride, DDT, was created by Swiss scientist Paul Müller. For this discovery, he was awarded the 1948 Nobel Prize for Physiology or Medicine. DDT was introduced in 1944. It functions by opening sodium channels in the insect's nerve cells. The contemporaneous rise of the chemical industry facilitated large-scale production of DDT and related chlorinated hydrocarbons.

Carbamate insecticides have similar mechanisms to organophosphates, but have a much shorter duration of action and are somewhat less toxic.

Pyrethroid pesticides mimic the insecticidal activity of the natural compound pyrethrum, the biopesticide found in pyrethrins. These compounds are nonpersistent sodium channel modulators and are less toxic than organophosphates and carbamates. Compounds in this group are often applied against household pests.

Neonicotinoids are synthetic analogues of the natural insecticide nicotine (with much lower acute mammalian toxicity and greater field persistence). These chemicals are acetylcholine receptor agonists. They are broad-spectrum systemic insecticides, with rapid action (minutes-hours). They are applied as sprays, drenches, seed and soil treatments. Treated insects exhibit leg tremors, rapid wing motion, stylet withdrawal (aphids), disoriented movement, paralysis and death. Imidacloprid may be the most common. It has recently come under scrutiny for allegedly pernicious effects on honeybees and its potential to increase the susceptibility of rice to planthopper attacks.

Ryanoids are synthetic analogues with the same mode of action as ryanodine, a naturally occurring insecticide extracted from Ryania speciosa (Flacourtiaceae). They bind to calcium channels in cardiac and skeletal muscle, blocking nerve transmission. The first insecticide from this class to be registered was Rynaxypyr, generic name chlorantraniliprole.

Insect growth regulator (IGR) is a term coined to include insect hormone mimics and an earlier class of chemicals, the benzoylphenyl ureas, which inhibit chitin (exoskeleton) biosynthesis in insects Diflubenzuron is a member of the latter class, used primarily to control caterpillars that are pests. The most successful insecticides in this class are the juvenoids (juvenile hormone analogues). Of these, methoprene is most widely used. It has no observable acute toxicity in rats and is approved by World Health Organization (WHO) for use in drinking water cisterns to combat malaria. Most of its uses are to combat insects where the adult is the pest, including mosquitoes, several fly species, and fleas. Two very similar products, hydroprene and kinoprene, are used for controlling species such as cockroaches and white flies. Methoprene was registered with the EPA in 1975. Virtually no reports of resistance have been filed. A more recent type of IGR is the ecdysone agonist tebufenozide (MIMIC), which is used in forestry and other applications for control of caterpillars, which are far more sensitive to its hormonal effects than other insect orders.

Some insecticides kill or harm other creatures in addition to those they are intended to kill. For example, birds may be poisoned when they eat food that was recently sprayed with insecticides or when they mistake an insecticide granule on the ground for food and eat it. Sprayed insecticide may drift from the area to which it is applied and into wildlife areas, especially when it is sprayed aerially.

The development of DDT was motivated by desire to replace more dangerous or less effective alternatives. DDT was introduced to replace lead and arsenic-based compounds, which were in widespread use in the early 1940s.

DDT was brought to public attention by Rachel Carson's book Silent Spring. One side-effect of DDT is to reduce the thickness of shells on the eggs of predatory birds. The shells sometimes become too thin to be viable, reducing bird populations. This occurs with DDT and related compounds due to the process of bioaccumulation, wherein the chemical, due to its stability and fat solubility, accumulates in organisms' fatty tissues. Also, DDT may biomagnify, which causes progressively higher concentrations in the body fat of animals farther up the food chain. The near-worldwide ban on agricultural use of DDT and related chemicals has allowed some of these birds, such as the peregrine falcon, to recover in recent years. A number of organochlorine pesticides have been banned from most uses worldwide. Globally they are controlled via the Stockholm Convention on persistent organic pollutants. These include: aldrin, chlordane, DDT, dieldrin, endrin, heptachlor, mirex and toxaphene.

Solid bait and liquid insecticides, especially if improperly applied in a location, get moved by water flow. Often, this happens through nonpoint sources where runoff carries insecticides in to larger bodies of water. As snow melts and rainfall moves over and through the ground, the water picks applied insecticides and deposits them in to larger bodies of water, rivers, wetlands, underground sources of previously potable water, and percolates in to watersheds. This runoff and percolation of insecticides can effect the quality of water sources, harming the natural ecology and thus, indirectly effect human populations through biomagnification and bioaccumulation.

Insecticides can kill bees and may be a cause of pollinator decline, the loss of bees that pollinate plants, and colony collapse disorder (CCD), in which worker bees from a beehive or Western honey bee colony abruptly disappear. Loss of pollinators means a reduction in crop yields. Sublethal doses of insecticides (i.e. imidacloprid and other neonicotinoids) affect bee foraging behavior. However, research into the causes of CCD was inconclusive as of June 2007.

Besides the effects of direct consumption of insecticides, populations of insectivorous birds decline due to the collapse of their prey populations. Spraying of especially wheat and corn in Europe is believed to have caused an 80 per cent decline in flying insects, which in turn has reduced local bird populations by one to two thirds.

Instead of using chemical insecticides to avoid crop damage caused by insects, there are many alternative options available now that can protect farmers from major economic losses. Some of them are:

Uses material from the Wikipedia article "Insecticide", released under the CC BY-SA 3.0 license.