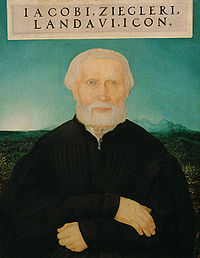 The humanist and theologian Jacob Ziegler (c. 1470/71 — August 1549) of Landau in Bavaria, was an itinerant scholar of geography and cartographer, who lived a wandering life in Europe. He studied at the University of Ingolstadt, then spent some time at the court of Pope Leo X before he converted to Protestantism; subsequently his geographical works were placed on the Index Librorum Prohibitorum.