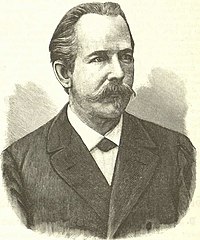 His earlier writings were devoted to classical geography, but in later years he wrote extensively on glacial geology, the history of geography, and regional geography. In the last group are some of his best-known works, such as the systemic monographs on the Ionian Islands, the standard geography of central Europe, and the geography of Silesia. Among English-speaking people he is best known as the author of "Central Europe" (English, 1903; German, 1904), the English edition, prepared by H. J. Mackinder, appearing in the series "The Regions of the World." This book was of particular value for its account of the physiography of the region which became the battle ground of Europe (1914, et seq.) and especially of the last chapter, "The Conditions of National Defense".

This article incorporates text from a publication now in the public domain: