Justin DeYarmond Edison Vernon (born April 30, 1981) is an American singer, songwriter, producer and multi-instrumentalist. He is best known as the primary songwriter and frontman of indie folk band Bon Iver. Known for his distinct falsetto voice, he is also a member of the bands Volcano Choir, Big Red Machine, The Shouting Matches, and Gayngs. He was previously a member of the now-defunct band DeYarmond Edison.

Vernon has received widespread acclaim for his work, predominantly with Bon Iver.

Vernon attended Memorial High School in Eau Claire, Wisconsin, where he still resides today. He formed his first band, Mount Vernon, in 1997 after meeting its members at a high school Wisconsin jazz camp. They released their first local musical project in 1998. He graduated from Memorial High in 1999 and attended college at the University of Wisconsin–Eau Claire, spending a semester in Ireland. Vernon majored in Religious Studies and minored in Women's Studies. In an interview with Stephen Colbert on The Colbert Report, he said that he was not ready to study music.

Justin Vernon founded the band DeYarmond Edison in 2001 while still in college. The band, which began performing in 2002, consisted of Vernon, Brad and Phil Cook, Christopher Porterfield and Joe Westerlund. The group saw varying line-up changes during its five years of existence.

After playing in the Eau Claire music scene, the four bandmates decided to leave their longtime home and move to Raleigh, North Carolina, to try their musical hand in a new place. The band released two records themselves, the first self-titled in 2004 and the second titled Silent Signs in 2005, and an EP of unreleased material is available on their Myspace page. After nearly a year in Raleigh, Vernon left for Wisconsin in 2006 after a breakup with the band and a girlfriend. The remaining members of DeYarmond Edison went on to form the folk bands Megafaun and Field Report, and remain good friends with Vernon.

Vernon came to international prominence with For Emma, Forever Ago, his first album as Bon Iver, which he recorded isolated in a northern Wisconsin cabin during the winter months of 2006 and 2007, while he was going through health and personal difficulties. The album was self-released by Vernon in July 2007 and after it received several positive reviews, including from Pitchfork, the album was rereleased in February 2008 and released internationally in May of that year.

On September 25, 2012, Vernon walked away from Bon Iver temporarily, virtually putting an end to the band for the time being. When asked for reasoning, he replied, "[I'm] winding it down. I look at it like a faucet. I have to turn it off and walk away from it because so much of how that music comes together is subconscious or discovering. There's so much attention on the band, it can be distracting at times. I really feel the need to walk away from it while I still care about it. And then if I come back to it – if at all – I'll feel better about it and be renewed or something to do that."

On August 9, 2019, Vernon released I, I, to critical acclaim. The band's fourth studio LP is vocal-heavy and features dozens of collaborators, emulating the message Vernon intended to send when working with Aaron Dessner in producing Big Red Machine.

Collaborations and side projects 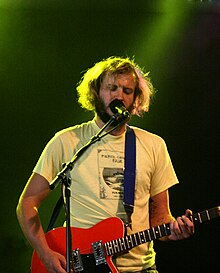 Vernon performing with Bon Iver in Gothenburg, Sweden in 2009

Vernon is a part of other musical groups, including Volcano Choir, which consists of Vernon and the members of the band Collections of Colonies of Bees. In 2009 Unmap was released. His collaborative group Gayngs, consisting of multiple established artists, including members from Megafaun, The Rosebuds, Doomtree and Solid Gold, among others, released Relayted in 2010. Vernon contributed vocals to seven songs on Anaïs Mitchell's 2010 album Hadestown, based on the Greek legend Orpheus and Eurydice. He is one third of The Shouting Matches, a blues-garage rock trio, along with Laarks and Peter Wolf Crier drummer Brian Moen, and former DeYarmond Edison bandmate Phil Cook. They have recorded but not yet released a 5-track EP, Mouthoil, and released their debut album, Grownass Man, in 2013. At The Shouting Matches' 2013 shows in Milwaukee and Minneapolis, Mouthoil CDs were available as a limited release.

During the creation of Kanye West's 2010 album My Beautiful Dark Twisted Fantasy, Vernon was invited to collaborate on various songs, providing vocals on "Dark Fantasy", "Monster", "Hell Of A Life" and "Lost in the World", as well as the song "That's My Bitch" from West and Jay-Z's collaborative album Watch The Throne in 2011. He was also involved in West's 2013 album Yeezus, contributing to "I Am a God", "Hold My Liquor", and "I'm In It". Vernon has on several occasions served as backing vocalist for West at his live performances, notably at the Coachella Valley Music and Arts Festival in 2011 and Glastonbury Festival in 2015, where West introduced Vernon as "one of the baddest white boys on the planet". In 2009, Vernon collaborated with Aaron Dessner on the song "Big Red Machine" for the AIDS benefit album Dark Was the Night produced by the Red Hot Organization.

He has produced albums for other artists, including Land of Talk's 2008 album Some Are Lakes and Kathleen Edwards' 2012 album Voyageur.

In 2012, Vernon began Chigliak, an imprint of Jagjaguwar, dedicated to albums that have had limited or non-commercial releases. 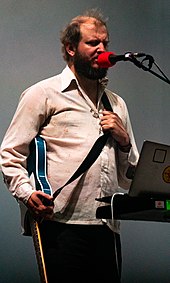 Vernon with Bon Iver in Barcelona, Spain at Primavera Sound in 2019

On June 23, 2018, Vernon joined Dead & Company on stage at Alpine Valley Music Theatre in East Troy, Wisconsin. He performed three songs with the band: Black Muddy River, Friend of the Devil, and Birdsong. Given Vernon's Wisconsin roots, it was a special appearance that highlighted the timelessness and versatility of the Dead's music.

In late August 2018, Vernon released the eponymous debut album of duet Big Red Machine alongside The National's Aaron Dessner. The 10 song self-titled album Big Red Machine was co-produced by Dessner, Vernon and Brad Cook, and features approximately 40 collaborators, including Bryce Dessner, Bryan Devendorf, and Richard Parry. The majority of the album was recorded in Dessner's garage studio in Hudson Valley, New York. The album seeks to convey the relational role of people in the creation of music, hence why there were so many contributing artists.

In March 2020 the Ryan Olson-produced album Sorry You Couldn't Make It by Swamp Dogg was released, with Vernon playing guitar on all tracks. He had previously appeared as a guest on Swamp Dogg's 2018 album Love, Loss & Autotune. Later in 2020, Vernon collaborated with Taylor Swift to write and feature on the song "Exile", with an instrumental credit on "Peace", for her eighth studio album Folklore. Swift released her ninth studio album Evermore, a surprise follow-up album to Folklore. Vernon co-wrote the title track and played other instruments as well as perform background vocals on other tracks.

Vernon founded and curated the Eaux Claires music and arts festival along with Aaron Dessner of The National.

In August 2016, Vernon and Dessner curated the second annual Eaux Claires festival. On the opening night of the festival, Bon Iver debuted their third album, 22, A Million, in front of a live audience. 22, A Million was released on September 30, 2016, to widespread critical acclaim.

With The Shouting Matches