Laura Hope Crews (December 12, 1879 – November 12, 1942) was a leading actress of the American stage in the first decades of the 20th century who is best remembered today for her later work as a character actress in motion pictures of the 1930s. Her best-known film role was Aunt Pittypat in Gone with the Wind.

Laura Hope Crews was the daughter of stage actress Angelena Lockwood and backstage carpenter John Thomas Crews. She had three older siblings. Crews started acting at age four. Her first stage appearance was at Woodward's Gardens. She stopped acting to finish school and then returned to acting in 1898. As she was a native San Franciscan, the records pertaining to her early life were destroyed in the earthquake and fire of 1906.

Most of Crews' formal education came in San Jose, as the family had moved there following the remarriage of Crews' mother.

In 1898, Crews performed in San Francisco as an ingenue with the Alcazar Stock Company. Two years later, she and her mother moved to New York City, where Crews began to act with the Henry V. Donnelly Stock Company. 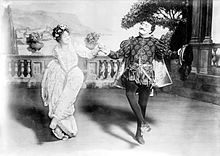 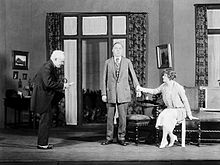 Erskine Sanford, Dudley Digges and Crews in the Theatre Guild production of A. A. Milne's Mr. Pim Passes By (1921)

Crews appeared in plays written by A.A. Milne, who was particularly impressed by her work in his Mr. Pim Passes By (1921). The play was a big success and ran for 232 performances on Broadway.

Crews also starred as Judith Bliss in the original Broadway production of Noël Coward's Hay Fever (1925), which she co-directed with Coward. She also appeared in The Silver Cord, written by Sidney Howard, which was produced by the New York Theater Guild in 1926 and ran for 212 performances. When The Silver Cord was not being presented, there were matinee performances of Right You Are If You Think You Are by Luigi Pirandello.

The Silver Cord was later made into a 1933 RKO movie with Crews reprising her onstage role of the mother. The film co-starred Joel McCrea, Frances Dee, and Irene Dunne. In the late 1920s, Crews had been hired by Gloria Swanson to help with her transition to talking pictures.

George Cukor, who had directed her in Camille (1936), recommended her for the role of Aunt Pittypat in Gone With the Wind (1939) after Billie Burke declined it. Cukor wanted Crews to play the role "in a Billie Burke-ish manner" with "the same zany feeling".

Her final stage appearance came in 1942, in the original Broadway run of Arsenic and Old Lace in which she replaced one of the original cast members. She stayed with the production for more than a year and a half on Broadway and in a touring company before she was forced to leave because of illness.

Crews died in the LeRoy Sanitarium in New York City in 1942, following an illness of four months. She had been admitted on October 15, suffering from a kidney ailment and was in serious condition for most of her time there. Laura Hope Crews was laid to rest at Cypress Lawn Memorial Park in Colma, California. Plot: Rose Mound, Lot 65.

Crews has a star at 6251 Hollywood Blvd on the Hollywood Walk of Fame. 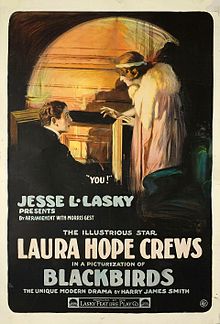