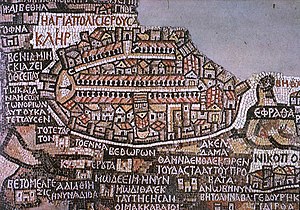 Jerusalem on the Madaba Map

The Madaba Map, also known as the Madaba Mosaic Map, is part of a floor mosaic in the early Byzantine church of Saint George in Madaba, Jordan. The Madaba Map is of the Middle East, and part of it contains the oldest surviving original cartographic depiction of the Holy Land and especially Jerusalem. It dates to the 6th century AD.

Reproduction of the Madaba Map

The Madaba Mosaic Map depicts Jerusalem with the New Church of the Theotokos, which was dedicated on 20 November 542. Buildings erected in Jerusalem after 570 are absent from the depiction, thus limiting the date range of its creation to the period between 542 and 570. The mosaic was made by unknown artists, probably for the Christian community of Madaba, which was the seat of a bishop at that time. In 614, Madaba was conquered by the Sasanian Empire. In the eighth century, the ruling Muslim Umayyad Caliphate had some figural motifs removed from the mosaic. In 746, Madaba was largely destroyed by an earthquake and subsequently abandoned.

The mosaic was rediscovered in 1884, during the construction of a new Greek Orthodox church on the site of its ancient predecessor. Patriarch Nicodemus I of Jerusalem was informed, but no research was carried out until 1896.

In the following decades, large portions of the mosaic map were damaged by fires, activities in the new church and by the effects of moisture. In December 1964, the Volkswagen Foundation gave the Deutscher Verein für die Erforschung Palästinas ("German Society for the exploration of Palestine") 90,000 DM to save the mosaic. In 1965, the archaeologists Heinz Cüppers and Herbert Donner undertook the restoration and conservation of the remaining parts of the mosaic. 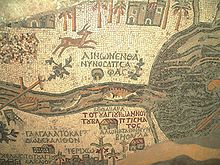 The floor mosaic is located in the apse of the church of Saint George at Madaba. It is not oriented northwards, like modern maps, but faces east towards the altar in such a fashion that the position of places on the map coincides with the actual compass directions. Originally, it measured 21 by 7 m and contained over two million tesserae. Its current dimensions are 16 by 5 m.

The mosaic map depicts an area from Lebanon in the north to the Nile Delta in the south, and from the Mediterranean Sea in the west to the Eastern Desert. Among other features, it depicts the Dead Sea with two fishing boats, a variety of bridges linking the banks of the Jordan, fish swimming in the river and receding from the Dead Sea; a lion (rendered nearly unrecognisable by the insertion of random tesserae during a period of iconoclasm) hunting a gazelle in the Moab desert, palm-ringed Jericho, Bethlehem and other biblical-Christian sites. The map may partially have served to facilitate pilgrims' orientation in the Holy Land. All landscape units are labelled with explanations in Greek. The mosaic's references to the tribes of Israel, toponymy, as well as its use of quotations of biblical passages, indicate that the artist who laid out the mosaic used as his primary source the Onomasticon of Eusebius (4th-century CE). A combination of folding perspective and aerial view depicts about 150 towns and villages, all of them labelled.

The largest and most detailed element of the topographic depiction is Jerusalem (Greek: ΙΕΡΟΥΣΑ[ΛΉΜ]), at the centre of the map. The mosaic clearly shows a number of significant structures in the Old City of Jerusalem: the Damascus Gate, the Lions' Gate, the Golden Gate, the Zion Gate, the Church of the Holy Sepulchre, the New Church of the Theotokos, the Tower of David and the Cardo Maximus. On Jerusalem's southwest side is shown Acel Dama (lit. "field of blood"), from Christian liturgy. The recognisable depiction of the urban topography makes the mosaic a key source on Byzantine Jerusalem. Also unique are the detailed depictions of cities such as Neapolis, Askalon, Gaza, Pelusium and Charachmoba, all of them nearly detailed enough to be described as street maps. Other designated sites include: Nicopolis (Greek: ΝΙΚΟΠΟΛΙΣ); Beth Zachar[ias] (Greek: ΒΕΘΖΑΧΑΡ[ΊΟΥ]); Bethlehem (Greek: ΒΗΘΛΕΕΜ); Socho (Greek: Σωχω), now Kh. Shuweikah (southwest of Hebron); Beth Annaba (Greek: ΒΕΤΟΑΝΝΑΒΑ); Saphitha (Greek: CΑΦΙΘΑ); Jericho (Greek: Ίεριχω); Modi'im (Greek: ΜΩΔΕΕΙΜ); Lydda (Greek: ΛΩΔΗ); Bethoron (Greek: Βεθωρων); Gibeon (Greek: ΓΑΒΑΩΝ); Rama (Greek: ΡΑΜΑ); Coreae (Greek: ΚΟΡΕΟΥΣ); Maresha (Greek: ΜΟΡΑΣΘΙ); Azotos Paralos (Ashdod-Coast) (Greek: ΑΖΩΤΟΣΠΑΡΑΛΣ); The Great Plain (Greek: ΡΟΣΔΑΝ), literally meaning, "The Tribe of Dan"; Jamnia (Greek: ΊΑΒΝΗΛΗΚΑΙΊΑΜΝΙΑ) (Lit. "Jabneel, which is also Jamnia"), among other sites.

The mosaic map of Madaba is the oldest known geographic floor mosaic in art history. It is used heavily for the localisation and verification of biblical sites. Study of the map played a major role in answering the question of the topographical location of Askalon (Asqalan on the map). In 1967, excavations in the Jewish Quarter of Jerusalem revealed the Nea Church and the Cardo Maximus in the very locations suggested by the Madaba Map.

In February 2010, excavations further substantiated its accuracy with the discovery of a road depicted in the map that runs through the center of Jerusalem. According to the map, the main entrance to the city was through a large gate opening into a wide central street. Until the discovery, archaeologists were not able to excavate this site due to heavy pedestrian traffic. In the wake of infrastructure work near the Jaffa Gate, large paving stones were discovered at a depth of four meters below ground that prove such a road existed.

Copies of the Madaba Map

Chronological list of early Christian geographers and pilgrims to the Holy Land who wrote about their travels, and other related works