Not to be confused with Missouri Valley Football Conference.
US college athletic conference 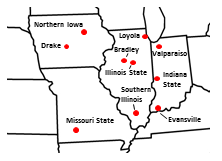 The Missouri Valley Conference (also called MVC or simply "The Valley") is the third-oldest collegiate athletic conference in the United States. Currently, its members are located in the midwestern United States.

The MVC established in 1907 as the Missouri Valley Intercollegiate Athletic Association or MVIAA, 12 years after the Big Ten, the only Division I conference that is older. It is the third oldest college athletic conference in the United States, after the Big Ten conference and the NCAA Division III MIAA (Michigan Intercollegiate Athletic Association). The MVIAA split and most of the larger schools formed a conference that retained the MVIAA name and ultimately became the Big Eight Conference in 1928. The smaller schools, plus Oklahoma A&M (now Oklahoma State University–Stillwater, who joined the Big Eight in 1957), formed the MVC, who retained the old MVIAA's administrative staff. Both conferences claimed 1907 as their founding date during the Big Eight's existence. The Big Eight merged with four Texas schools of the Southwest Conference to form the Big 12 Conference in 1996.

MVC teams held a 74–27 non-conference record during the 2006–07 college basketball season, including a record of 44–1 at home. The Valley finished in the top six of the RPI and ahead of a BCS conference for the second consecutive year, while also garnering multiple NCAA bids for the ninth straight year and 12th of 14.

The MVC has not sponsored football since 1985, when it was a hybrid I-A/I-AA (now FBS and FCS), respectively. However, five members have football programs in the Missouri Valley Football Conference (MVFC) (known as the Gateway from 1985 to 2008) of Division I FCS, and a sixth and a seventh compete in another FCS conference, the Pioneer Football League. The Missouri Valley Conference shares its name with the MVFC, and the two also operate from the same headquarters complex in St. Louis; however, the two are separate administratively.

After weeks of speculation, Wichita State announced on April 7, 2017, that it would leave the conference to join the American Athletic Conference starting with the 2017–18 season. The conference announced it extended an invitation to Valparaiso University on May 9, 2017; and on May 25, the MVC announced that Valparaiso would officially join the following July 1.

Note: In the case of spring sports, the year of joining is the calendar year before the start of competition.

This list does not include current full member Valparaiso. As noted above, the Crusaders played women's soccer in the MVC from 1996 to 1998 (ending in the 1998–99 school year). 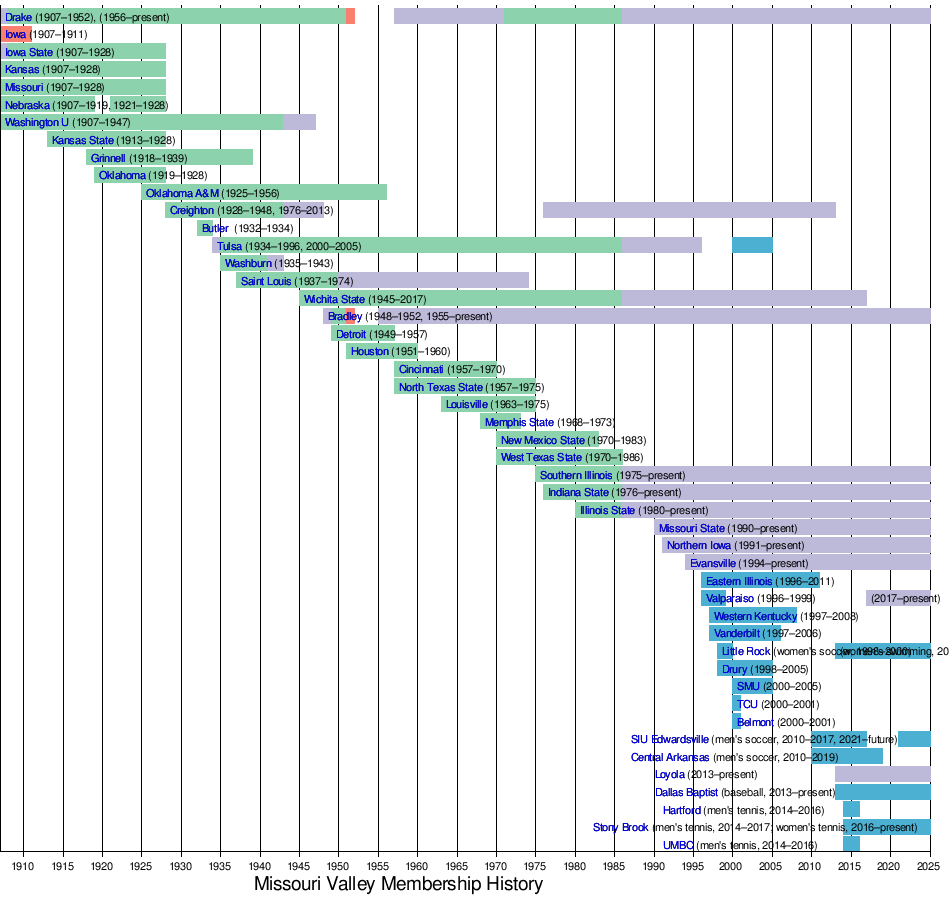 The MVC plans to use divisions in men's and women's basketball, softball, and women's volleyball in the near future. The division alignments are as follows:

Men's varsity sports not sponsored by the Missouri Valley Conference which are played by Valley schools:

Women's varsity sports not sponsored by the Missouri Valley Conference which are played by Valley schools:

The Missouri Valley Conference Men's Basketball Championship is often referred to as Arch Madness, in reference to the Gateway Arch at the tournament's present location of St. Louis, Missouri, and a play on "March Madness".

NCAA Championships as of March, 2013

(*-Titles won by schools in Division II/College Division prior to their moving to Division I in the late 1960s or early 1970s.)

Football poll, Helms and AIAW titles are not included in the NCAA Championship count.

The Valley is well known for having some of the most dedicated fanbases in all of college basketball, with several members regularly selling out their large arenas on a nightly basis throughout the year. Former member (Creighton) had the sixth highest attendance for Division I in 2012–13 while Bradley, Illinois State, Missouri State, and Indiana State were all among the NCAA's top 100 teams in home attendance.

The Valley made history in March 2007 with record attendance for four days at St. Louis' Scottrade Center as 85,074 fans turned out to watch the five sessions of the tournament. The two sellout crowds of 22,612 for the semifinals and final of the 2007 State Farm Tournament set an all-time attendance record for basketball at the arena and also gave The Valley the distinction of having the largest championship crowd for any of the 30 NCAA conference tournaments in 2007.