New Cumnock is a town in East Ayrshire, Scotland. It expanded during the coal-mining era from the late 18th century, and mining remained its key industry until its pits were shut in the 1960s. The town is 5.7 miles (9.2 km) south-east of Cumnock, and 21 miles (34 km) east of Ayr.

Public transport links include the New Cumnock railway station on the Glasgow South Western Line and the A76 Kilmarnock to Dumfries trunk road. 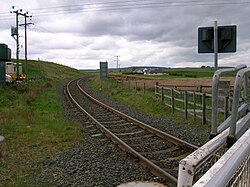 Opencast coal mining was one of the main employers in the village, before the closure of the opencast works was announced in May 2013, resulting in the loss of a number of jobs. In 1950, thirteen people were killed in a mining disaster at the Knockshinnoch Castle Colliery; a film was made about the disaster called The Brave Don't Cry and there is a memorial at the site of the disaster. The Scottish Wildlife Trust took over the Knockshinnoch Bing, turning into a wetland reserve with paths.

One of the first mentions of the village was when Patrick Dunbar of Comenagh signed the Ragman Roll of 1296. Blind Harry's poem The Actes and Deidis of the Illustre and Vallyeant Campioun Schir William Wallace placed William Wallace in and around the village four times in his heroic tales of the patriot, calling it Cumno and Dunbars' castle, which sat on Castlehill in the midst of a vast loch, as "Black Bog Castle".

Both William Wallace and Robert Bruce were hunted within the Afton's glen, where Robert Burns' "Sweet Afton" still flows gently, until it merges into the River Nith. Wallace seems to have known the surrounding area very well indeed; in fact many believe he may have spent much of his youth there. There is even a Castle William "up the glen" said to have been used as a fortress by him.

The name of the settlement changed through time, referred to as Cumnock Castle on Timothy Pont's map of Ayrshire c.1600.

The parish of New Cumnock’s association with William Wallace, like many other places throughout Scotland, has its origins in Blind Harry’s 15th century epic work “The Wallace”. Harry places Wallace in the parish of New Cumnock on no fewer than four occasions that span the period from 1296 through to his betrayal in July, 1305 and his martyrdom in London on 23 August 1305.

In 1296, William Wallace and his men were forced to turn back from New Cumnock because the road at Corsencon had been destroyed. “At Corssencon the gait was spilt that tide” The main route from Nithsdale to Ayrshire passed by Corsencon hill in the east of the parish where since 1205 a toll and customs point had stood. Wallace’s detour took him to Avondale (Strathhaven) where he and his men defeated an English force at Loudon Hill.

In May of the following year Wallace slew the English sheriff of Lanark and soon after Blind Harry places Wallace and his men at New Cumnock again. “To the Blak Crag in Cumno past agayne, His houshauld set with men of mekill mayne, Thre monethis thar he dwellyt in gud rest”

Wallace’s household at Blak Crag, is in the lands of Blackcraig in the upper reaches of the Afton Water. In September 1297 Wallace had joined forces with Sir Andrew Murray and defeated the English army at Stirling Bridge. In the spring and early summer of 1298, Wallace, now Sir William and Guardian of Scotland, spent time consolidating his position, and this may be the period of Harry’s ‘three months rest’, i.e. rest from warfare. It was also during this period that Wallace paid a visit to his Uncle Sir Ranald Craufurd in Ayr, before - “In Cumno syne till his duellyng went he”.

Defeat at the hands of Edward I at Falkirk in July, 1298 resulted in Wallace relinquishing his Guardianship of Scotland and as Edward I tightened his grip and control over the nobles of Scotland, Wallace had become no more than an unwanted rebel to many that once had considered him Scotland’s saviour.

The last place Blind Harry has Wallace at before his capture and betrayal at Glasgow in July, 1305 is at home in Blackraig, New Cumnock.

“And Wallace past in Cumno with blith will, At the Blak Rok, quhar he was wont to be, Apon that sted a ryall house held he”

In 1999, these words took on a new significance. The Wallace Seal was discovered and thereupon emblazoned was “William Wallace, son of Alan Wallace”, while within the Ragman Roll of 1296, we find “Alan Wallace, crown tenant in Ayrshire”. Clearly then the Wallace family were no vassals of the Stewarts and the tenuous links with William Wallace and the Stewart lands of Elderslie in Renfrewshire and those of Kyle Stewart in Ayrshire can be discounted. The crown lands in Ayrshire are found in King’s Kyle and it is here that Blackraig hill in the parish of New Cumnock dominates the landscape. Across the Afton Water stands the ruined cottage of Over Blackcraig in the shadow of a glorious rocky outcrop known as Castle William, for upon this sted Sir William Wallace held a ryall house, a crown property.

On 10 February 1306, Robert the Bruce killed John Comyn at Greyfriars Kirk, Dumfries. By May of that year Bruce was crowned King of Scots at Scone but early setbacks against English forces saw him seek refuge in the Western Isles and then in Ireland. In the spring of 1307 Bruce and his followers returned to the Scottish mainland and ambushed an English force under the command of Sir Aymer de Vallence at Glen Trool, Galloway. Worse was to follow for the beleaguered Vallence, when on 10 May 1307, he and his men were defeated by Bruce at Loudon Hill, Ayrshire. John Barbour in his epic work ‘The Bruce’ tells how the King of Scots then took refuge in Cumnock, where it was ‘straitast’, i.e. steepest, a reference to Blackcraig and Craigbraneoch hills in the upper reaches of Glen Afton, New Cumnock. Here he was joined by Sir James Douglas, who warned of the impending danger. Supplies had been sent to the English garrison of 30 men at arms and 100 infantry at Cumnock Castle, at the meeting place of the Afton Water and River Nith and Aymer de Vallence’s forces were to be joined by John of Lorn and his ‘aucht hunder men’.

Lorn, a nephew of John Comyn and a sworn enemy of Bruce, had brought with him a sleuth-hound which reputedly had belonged to the king, to help track down his former master. To no avail, for again Bruce and his ‘four hundred men’ evaded capture, this time ‘up in the strenthis’, i.e. the hills of New Cumnock. Local folk-lore suggests that Stayamera rock-face on Craigbraneoch hill overlooking Craigs farm was named as a taunt to the English commander Vallence, ‘Stay Amery’ i.e. stay, keep chasing the Bruce.

Edward I of England’s patience over his commander’s incompetence had run out. He raised a great army and headed north to put an end to Bruce once and for all. However, ill-health got the better of the ageing King and he died on 7 July 1307, near Carlisle. His son, now Edward II, marched north through Nithsdale at the head of his father’s huge army and arrived at Cumnock Castle, on the 19 August 1307. Bruce continued to lie low in the hills of south-west Scotland and Edward II, one of the most powerful kings in Europe was left to hold court and carry on with the business of the day at Cumnock Castle for eight days in August. Intriguingly, one of the payments he made during that time was to a poor woman for bringing two dogs to him. Were these the hounds that failed to hunt Bruce down in Glen Afton? Edward II soon gave up the fruitless search and returned to England.

Evading capture Bruce and his men were able to break free from the south-west of Scotland and overcome his enemies within Scotland and seven years later Edward II returned at the head of another army only to be defeated by Bruce at the Battle of Bannockburn, in June 1314.

Burns was a frequent visitor to the town and made a few friends in the area. There are plaques (mainly donated by New Cumnock Burns Club) on several buildings in and around New Cumnock. Robert Burns frequently mentions Corsencon Hill, referring to it as Parnassus Hill - in Greek mythology, Parnassus Hill was where Apollo slew the giant serpent or Python.

New Cumnock was notable for a number of significant Christian revivals in the early half of the 20th Century, including a sizeable number of conversions in 1921. A strong Christian heritage continues in the village by way of Christian fellowships in:

Views in and around New Cumnock