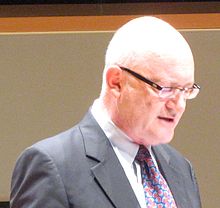 Sir Nigel John Thrift, DL FBA FAcSS FRSGS (born 12 October 1949 in Bath) is a British academic and geographer. In 2018 he was appointed as Chair of the Committee on Radioactive Waste Management, a committee that gives independent scientific and technical advice on radioactive waste to the UK government and the devolved administrations. He is a Visiting Professor at the University of Oxford and Tsinghua University and an Emeritus Professor at the University of Bristol. In 2016 and 2017 he was the Executive Director of the Schwarzman Scholars, an international leadership program at Tsinghua University in Beijing. He was the Vice-Chancellor of the University of Warwick from 2006 to 2016. He is a leading academic in the fields of human geography and the social sciences.

In 2005 he was appointed vice-chancellor of the University of Warwick, taking up the position in July 2006. He intended to retire at the end of the university’s 50th anniversary year in 2015, but extended by a month to the end of January 2016.

Thrift was knighted in the 2015 New Year Honours for services to higher education.

Thrift's early work was most readily associated with the study of time and time-geography and with economic geography, especially international finance. His later work has paid attention to a variety of topics including the nature of space, cities, information technology, repair and maintenance, and especially 'non-representational theory', a body of work that stresses the performative aspects of practice in Western societies. His work on time, language, power, representations, and the body has been particularly influential, and it has been suggested that Thrift's career reflects and in some cases spurred substantial intellectual changes in human geography in the 1980s and 1990s.

Thrift has also edited and authored a number of books, encyclopaedias, and primers in human geography.

At Oxford, Thrift served as head of the Life and Environmental Sciences Division before becoming Pro-Vice-Chancellor for Research.

Thrift's role as Vice Chancellor at Warwick saw him launch several new initiatives, boosting the University's presence in London (an expansion of the Business School in The Shard building) and overseas (through a strong partnership with Monash University, and with plans to develop a campus in California). Warwick is now ranked firmly in the world's top 100 universities, and in the top 10 in the UK.

Thrift's pay increase of £16,000 announced in December 2014, was again met with protests. On 3 December 2014 police used CS spray to tackle protests at the University of Warwick, after a security guard was assaulted (two protestors, including a student were later prosecuted). The University issued a written statement that expressed concern at the situation and denounced the alleged violence.