Journey or search of moral or spiritual significance
For other uses, see Pilgrimage (disambiguation). 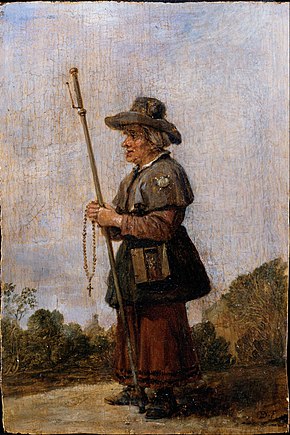 A pilgrimage is a journey, often into an unknown or foreign place, where a person goes in search of new or expanded meaning about their self, others, nature, or a higher good, through the experience. It can lead to a personal transformation, after which the pilgrim returns to their daily life.

Pilgrimages frequently involve a journey or search of moral or spiritual significance. Typically, it is a journey to a shrine or other location of importance to a person's beliefs and faith, although sometimes it can be a metaphorical journey into someone's own beliefs.

Many religions attach spiritual importance to particular places: the place of birth or death of founders or saints, or to the place of their "calling" or spiritual awakening, or of their connection (visual or verbal) with the divine, to locations where miracles were performed or witnessed, or locations where a deity is said to live or be "housed", or any site that is seen to have special spiritual powers. Such sites may be commemorated with shrines or temples that devotees are encouraged to visit for their own spiritual benefit: to be healed or have questions answered or to achieve some other spiritual benefit.

A person who makes such a journey is called a pilgrim. As a common human experience, pilgrimage has been proposed as a Jungian archetype by Wallace Clift and Jean Dalby Clift.

The Holy Land acts as a focal point for the pilgrimages of the Abrahamic religions of Judaism, Christianity, and Islam. According to a Stockholm University study in 2011, these pilgrims visit the Holy Land to touch and see physical manifestations of their faith, confirm their beliefs in the holy context with collective excitation, and connect personally to the Holy Land.

The Christian priest Frank Fahey writes that a pilgrim is "always in danger of becoming a tourist", and vice versa since travel always in his view upsets the fixed order of life at home, and identifies eight differences between the two:

Bahá'u'lláh decreed pilgrimage to two places in the Kitáb-i-Aqdas: the House of Bahá'u'lláh in Baghdad, Iraq, and the House of the Báb in Shiraz, Iran. Later, `Abdu'l-Bahá designated the Shrine of Bahá'u'lláh at Bahji, Israel as a site of pilgrimage. The designated sites for pilgrimage are currently not accessible to the majority of Bahá'ís, as they are in Iraq and Iran respectively, and thus when Bahá'ís currently refer to pilgrimage, it refers to a nine-day pilgrimage which consists of visiting the holy places at the Bahá'í World Centre in northwest Israel in Haifa, Acre, and Bahjí.

Tibetans on a pilgrimage to Lhasa, doing full-body prostrations, often for the entire length of the journey

There are four places that Buddhists pilgrimage to:

Other famous places for Buddhist pilgrimage include: 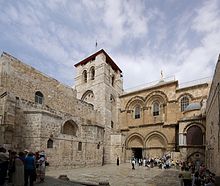 Church of the Holy Sepulchre in Jerusalem, Israel according to tradition is the site where Jesus was crucified and resurrected 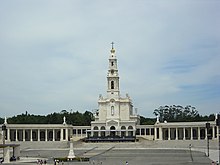 The Sanctuary of Our Lady of Fátima is one of the largest pilgrimage sites (Marian shrine) in the world.

The purpose of Christian pilgrimage was summarized by Pope Benedict XVI in this way:

Pilgrimages were, and are, also made to Rome and other sites associated with the apostles, saints and Christian martyrs, as well as to places where there have been apparitions of the Virgin Mary. A popular pilgrimage journey is along the Way of St. James to the Santiago de Compostela Cathedral, in Galicia, Spain, where the shrine of the apostle James is located. A combined pilgrimage was held every seven years in the three nearby towns of Maastricht, Aachen and Kornelimünster where many important relics could be seen (see: Pilgrimage of the Relics, Maastricht). Chaucer's The Canterbury Tales recounts tales told by Christian pilgrims on their way to Canterbury Cathedral and the shrine of Thomas Becket. Marian pilgrimages remain very popular in Latin America. 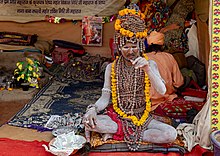 According to Karel Werner's Popular Dictionary of Hinduism, "most Hindu places of pilgrimage are associated with legendary events from the lives of various gods.... Almost any place can become a focus for pilgrimage, but in most cases they are sacred cities, rivers, lakes, and mountains." Hindus are encouraged to undertake pilgrimages during their lifetime, though this practice is not considered absolutely mandatory. Most Hindus visit sites within their region or locale.

The Ḥajj (Arabic: حَـجّ‎, main pilgrimage to Mecca) is one of the five pillars of Islam and a mandatory religious duty for Muslims that must be carried out at least once in their lifetime by all adult Muslims who are physically and financially capable of undertaking the journey, and can support their family during their absence. The gathering during the Hajj is considered the largest annual gathering of people in the world. Since 2014, two or three million people have participated the Hajj annually. The mosques in Mecca and Medina were closed in February 2020 because of the COVID-19 pandemic and the hajj was permitted for only a very limited number of Saudi nationals and foreigners living in Saudi Arabia starting on 29 July.

Another important place for Muslims is the city of Medina, the second holiest site in Islam, in Saudi Arabia, the final resting place of Muhammad in Al-Masjid an-Nabawi (The Mosque of the Prophet).

The Ihram (white robe of pilgrimage) is meant to show equality of all Muslim pilgrims in the eyes of Allah. ‘A white has no superiority over a black, nor a black over a white. Nor does an Arab have superiority over a non-arab, nor a non-arab over an arab - except through piety’ - statement of the Prophet Muhammad.

About four million pilgrims participate in the Grand Magal of Touba, 200 kilometres (120 mi) east of Dakar, Senegal. The pilgimage celebrates the celebrate the life and teachings of Cheikh Amadou Bamba, who founded the Mouride brotherhood in 1883 and begins on the 18th of Safar.

Al-Arba‘īn (Arabic: ٱلْأَرْبَـعِـيْـن‎, "The Forty"), Chehelom (Persian: چهلم‎, Urdu: چہلم‎, "the fortieth [day]") or Qirkhī, Imāmīn Qirkhī (Azerbaijani: İmamın qırxı (Arabic: إمامین قیرخی‎), "the fortieth of Imam") is a Shia Muslim religious observance that occurs forty days after the Day of Ashura. It commemorates the martyrdom of Husayn ibn Ali, the grandson of Muhammad, which falls on the 20th or 21st day of the month of Safar. Imam Husayn ibn Ali and 72 companions were killed by Yazid I's army in the Battle of Karbala in 61 AH (680 CE). Arba'een or forty days is also the usual length of mourning after the death of a family member or loved one in many Muslim traditions. Arba'een is one of the largest pilgrimage gatherings on Earth, in which up to 31 million people go to the city of Karbala in Iraq.

The second largest holy city in the world, Mashhad, Iran, attracts more than 20 million tourists and pilgrims every year, many of whom come to pay homage to Imam Reza (the eighth Shi'ite Imam). It has been a magnet for travelers since medieval times. Due to the COVID-19 pandemic in Iran, worshippers were encouraged to stay at home rather than visit the cities of Najaf and Karbala. Smaller than usual crowds gathered for Ashura, but many did not wear facemasks or practice social distancing, and the number of cases of viral infections in Iran grew sharply. 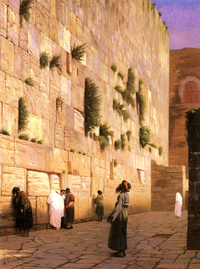 Jews at the Western Wall in Jerusalem during the Ottoman period, 1867
See also: Temple in Jerusalem, Jerusalem in Judaism, and Three Pilgrimage Festivals

While Solomon's Temple stood, Jerusalem was the centre of the Jewish religious life and the site of the Three Pilgrimage Festivals of Passover, Shavuot and Sukkot, and all adult men who were able were required to visit and offer sacrifices (korbanot) at the Temple. After the destruction of the Temple, the obligation to visit Jerusalem and to make sacrifices no longer applied. The obligation was restored with the rebuilding of the Temple, but following its destruction in 70 CE, the obligation to make a pilgrimage to Jerusalem and offer sacrifices again went into abeyance.

The western retaining wall of the Temple Mount, known as the Western Wall or "Wailing" Wall, is the remaining part of Second Jewish Temple in the Old City of Jerusalem is the most sacred and visited site for Jews. Pilgrimage to this area was off-limits to Jews from 1948 to 1967, when East Jerusalem was under Jordanian control.

There are numerous lesser Jewish pilgrimage destinations, mainly tombs of tzadikim, throughout the Land of Israel and all over the world, including: Hebron; Bethlehem; Mount Meron; Netivot; Uman, Ukraine; Silistra, Bulgaria; Damanhur, Egypt; and many others.

Sikh pilgrim at the Harmandir Sahib (the Golden Temple) in Amritsar, India.

Sikhism does not consider pilgrimage as an act of spiritual merit. Guru Nanak went to places of pilgrimage to reclaim the fallen people, who had turned ritualists. He told them of the need to visit that temple of God, deep in the inner being of themselves. According to him: "He performs a pilgrimage who controls the five vices."

Eventually, however, Amritsar and Harmandir Sahib (the Golden Temple) became the spiritual and cultural centre of the Sikh faith, and if a Sikh goes on pilgrimage it is usually to this place.

The Panj Takht (Punjabi: ਪੰਜ ਤਖ਼ਤ) are the five revered gurdwaras in India that are considered the thrones or seats of authority of Sikhism and are traditionally considered a pilgrimage. 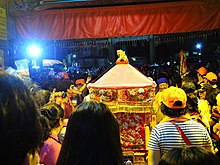 Baishatun Pilgrimage: Mazu and her palanquin

Mazu, also spelled as Matsu, is the most famous sea goddess in the Chinese southeastern sea area, Hong Kong, Macau and Taiwan.

Mazu Pilgrimage is more likely as an event (or temple fair), pilgrims are called as "Xiang Deng Jiao" (pinyin: xiāng dēng jiǎo, it means "lantern feet" in Chinese), they would follow the Goddess's (Mazu) palanquin from her own temple to another Mazu temple. By tradition, when the village Mazu palanquin passes, the residents would offer free water and food to those pilgrims along the way.

There are 2 main Mazu pilgrimages in Taiwan, it usually hold between lunar January and April, depends on Mazu's will.

The Yazd Atash Behram in Iran is an Atash Bahram, the highest grade of fire temple in Zoroastrianism

In Iran, there are pilgrimage destinations called pirs in several provinces, although the most familiar ones are in the province of Yazd. In addition to the traditional Yazdi shrines, new sites may be in the process of becoming pilgrimage destinations. The ruins are the ruins of ancient fire temples. One such site is the ruin of the Sassanian era Azargoshnasp fire temple in Iran's Azarbaijan Province. Other sites are the ruins of fire temples at Rey, south of the capital Tehran, and the Firouzabad ruins sixty kilometres south of Shiraz in the province of Pars.

Atash Behram ("Fire of victory") is the highest grade of fire temple in Zoroastrianism. It has 16 different "kinds of fire", that is, fires gathered from 16 different sources. Currently there are 9 Atash Behram, one in Yazd, Iran and the rest in Western India. They have become a pilgrimage destination.

In India the cathedral fire temple that houses the Iranshah Atash Behram, located in the small town of Udvada in the west coast province of Gujarat, is a pilgrimage destination.

Retrieved from "https://en.wikipedia.org/w/index.php?title=Pilgrimage&oldid=1004046677"
Uses material from the Wikipedia article Pilgrimage, released under the CC BY-SA 3.0 license.