A piscivore /ˈpɪsɪvɔːr/ is a carnivorous animal that eats primarily fish. Piscivorous is equivalent to the Greek-derived word ichthyophagous. Fish were the diet of early tetrapods (amphibians); insectivory came next, then in time, reptiles added herbivory.

Some animals, such as the sea lion and alligator, are not completely piscivorous, often preying on aquatic invertebrates or land animals in addition to fish, while others, such as the bulldog bat and gharial, are strictly dependent on fish for food. Humans can live on fish-based diets as can their carnivorous domesticated pets, such as dogs and cats. The name "piscivore" is derived from the Latin word for fish, piscis. Some creatures, including cnidarians, octopuses, squid, spiders, sharks, cetaceans, grizzly bears, jaguars, wolves, snakes, turtles, and sea gulls, may have fish as significant if not dominant portions of their diets.

The ecological effects of piscivores can extend to other food chains. In a study of cutthroat trout stocking, researchers found that the addition of this piscivore can have noticeable effects on non-aquatic organisms, in this case bats feeding on insects emerging from the water with the trout.

Numerous extinct and prehistoric animals are hypothesized to have been primarily piscivorous due to anatomy and/or ecology. Furthermore, some have been confirmed to be piscivorous through fossil evidence. This list includes specialist piscivores, such as Laganosuchus, as well as generalist predators, such as Baryonyx & Spinosaurus, found to have or assumed to have eaten fish. 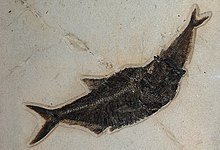 Specimen of Diplomystus swallowing another fish
Retrieved from "https://en.wikipedia.org/w/index.php?title=Piscivore&oldid=1009060207"
Uses material from the Wikipedia article Piscivore, released under the CC BY-SA 3.0 license.