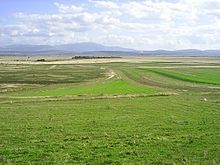 Livanjsko Polje in Bosnia is the largest polje in the world (Mount Dinara visible in the background).

поље, Serbo-Croatian: [pôʎe]), also karst polje or karst field, is a large flat plain found in karstic geological regions of the world, with areas usually 5–400 km2 (2–154 sq mi). The name derives from the Slavic languages and literally means 'field', whereas in English polje specifically refers to a karst plain or karst field.

A polje, in geological terminology, is a large, flat-floored depression within karst limestone, whose long axis develops in parallel with major structural trends and can become several miles (tens of kilometers) long. Superficial deposits tend to accumulate along the floor. Drainage may be either by surface watercourses (as an open polje) or by swallow holes (as a closed polje) or ponors. Usually, the ponors cannot transmit entire flood flows, so many poljes become wet-season lakes. The structure of some poljes is related to the geological structure, but others are purely the result of lateral dissolution and planation. The development of poljes is fostered by any blockage in the karst drainage.

A polje or karst polje covers the flatbottomed lands of closed basins which may extend over large areas, up to 1,000 km2. The flat floor of a polje may consist of bare limestone, of a nonsoluble formation (as with rolling topography), or of soil. A polje typically shows complex hydrogeological characteristics such as exsurgences, estavelles, swallow holes, and lost rivers. In colloquial use, the term "polje" designates flat-bottomed lands which are overgrown or are under cultivation. The Dinaric Karst has many poljes.

They are mostly distributed in subtropical and tropical latitudes but some also appear in temperate or, rarely, boreal regions. Usually covered with thick sediments, called "terra rossa", they are used extensively for agricultural purposes.

Some poljes of the Dinaric Alps are inundated during the rainy winters and spring seasons as masses of water called izvor or vrelo appears at the margins. The water disappears through shafts called ponor.

The term and its origin

The term is synonymous with interior valley. The word itself can be found in a number of languages including: French, German, Greek, Italian, Spanish and Turkish (which uses polye). The word polje (Cyrillic:поље) itself is of Slavic origin (best known as the root for the country Poland - Polska from the Polish word pole). English borrowed polje from Slovene or Serbo-Croatian. The equivalent in neighbouring Macedonian and Bulgarian is pole (поле), and in Russian it is polye (поле).

Retrieved from "https://en.wikipedia.org/w/index.php?title=Polje&oldid=994105571"
Uses material from the Wikipedia article Polje, released under the CC BY-SA 3.0 license.