Quarr Abbey (French: Abbaye Notre-Dame de Quarr) is a monastery between the villages of Binstead and Fishbourne on the Isle of Wight in southern England. The name is pronounced as "Kwor" (rhyming with "for"). It belongs to the Catholic Order of St Benedict.

The Grade I listed monastic buildings and church, completed in 1912, are considered some of the most important twentieth-century religious structures in the United Kingdom; Sir Nikolaus Pevsner described the Abbey as "among the most daring and successful church buildings of the early 20th century in England". They were constructed from Belgian brick in a style combining French, Byzantine and Moorish architectural elements. In the vicinity are a few remains of the original twelfth-century abbey.

A community of fewer than a dozen monks maintains the monastery's regular life and the attached farm. As of 2013[update], the community provides two-month internships for young men. 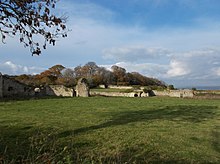 Ruins of the old abbey

St. Mary's Abbey at Quarr was part of the Cistercian Order and was founded in 1132 by Baldwin de Redvers, 1st Earl of Devon, fourth Lord of the Isle of Wight. The founder was buried in the Abbey in 1155, and his remains, along with those of a royal princess, Cecily of York (died 1507), second daughter of King Edward IV of England and godmother of Henry VIII, still lie on the site of the mediaeval monastery, as do other important personages. Arreton Manor was part of the abbey from the 12th century until 1525.

The name Quarr comes from 'quarry', because there used to be a stone quarry in the neighbourhood. The original title of the monastery was the Abbey of Our Lady and St John. Stone from the quarry was used in the Middle Ages for both ecclesiastical and military buildings, for example for parts of the Tower of London.

This site became a valuable and productive property. Because of this, it was the tradition for the abbot to be appointed warden or lord of the island. The prevalence of piracy in the area led to the granting in 1340 of special permission to fortify the area against attack. A stone wall, sea gate and portcullis were constructed. The ruins of these defences are still visible.

After the Dissolution of the Monasteries in 1536, the land was acquired by a Southampton merchant, George Mills who demolished most of the abbey. Its stone was used for fortifications at the nearby towns of Cowes and Yarmouth.

One of the three abbey bells is preserved in the belfry of the nearby Anglican parish church, originally built by the monks of Quarr Abbey for their lay dependants. Salvaged stone was also used to build Quarr Abbey House.

A nineteenth-century French law banned religious orders except by special dispensation, though its application varied with changes of government. As a precaution, Abbot Paul Delatte (1848–1937) of the Benedictine Solesmes Abbey had sent a monk to England to look for a house to shelter the community. A crisis came in 1880, when congregations were ordered to apply for authorisation within three months. Although this was at first brutally enforced against men's communities, protests resulted in gradual abandonment of the measures. Congregations were reconstituted. On 1 July 1901, however, tolerance towards religious communities came to an end with the passing of a new law.

The founder of Solesmes, Prosper Guéranger, had originally thought of England as a possible place of refuge should the community have to go into exile. Moreover, since 1896, at the invitation of the former Empress Eugénie, the Solesmes Benedictines had taken over as a priory the former Premonstratensian house of Farnborough Abbey, which sheltered the tomb of Napoleon III.

Finally, at the end of July, attention was drawn to a suitable 'large house on the Isle of Wight which seems to meet the requirements of the monks', Appuldurcombe House near Wroxall on the Isle of Wight. The house was viewed and accepted, and a lease contract was signed on 19 August 1901. A former monastic site, the construction of the house had been begun in 1701 by Sir Robert Worsley on the site of a Tudor manor house and completed much later (1773) by Sir Richard Worsley who, from 1787, also established there what was to become a well-known art collection. On the death of Sir Richard in 1805, the estate passed to his niece, who was married to the Second Baron and first Earl of Yarborough. The family connection with the house ended in 1855, when the estate was sold off by her son, the Second Earl of Yarborough.

The monks wasted no time in beginning their transfer from Solesmes to the Isle of Wight and, on Saturday 21 September 1901, practically the entire community of Solesmes reached Appuldurcombe.

The first monks arrived at Quarr Abbey House from Appuldurcombe on 25 June 1907 to prepare the grounds and the beginnings of a kitchen garden. They also put up fencing around the property, established a chicken farm and planted an orchard.

One of the monks, Dom Paul Bellot, aged 31, was an architect. He designed and draughted plans for the new abbey, incorporating and extending Quarr Abbey House, some distance from the ruins of the medieval monastery. 300 workers from the Isle of Wight, accustomed to building only dwelling-houses, raised a building whose design and workmanship is admired by all who visit the Abbey. The building of the refectory and three sides of the cloister began in 1907 and was completed inside one year. The rest of the monks came from Appuldurcombe and, in April 1911, work began on the Abbey church which was quickly completed and consecrated on 12 October 1912. It was built with tall pointed towers of glowing Flemish brick, adding a touch of Byzantium to the skyline. The monastic buildings are considered some of the most important twentieth-century religious structures in the United Kingdom.

With a shrinking community and ageing buildings the World Monuments Fund identified Quarr Abbey as one of the 100 most endangered historic sites in the world. In July 2012 the Heritage Lottery fund awarded Quarr a £1.9 million matching grant. The project includes repair and conservation of the abbey remains and existing abbey church, as well as a visitor information centre and education and training placements in construction for local college students. In the Bellot Abbey, repairs will be carried out to remedy rain penetration.

In July 2013, the Abbey hosted a Chant Forum, a five-day course on early polyphony and Gregorian Chant.

Tony Hendra devotes much of his 2004 memoir, Father Joe: The Man Who Saved My Soul, to his experiences at Quarr Abbey.

In his 1929 memoir, Good-Bye to All That, Robert Graves describes visiting Quarr Abbey whilst recovering on the Isle of Wight during the Great War. The fresh grains, vegetables and fruits at the Abbey helped change Graves' previously held negative views of Catholicism.

Burials in the old abbey