For the river in Tasmania, Australia, see Forth River (Tasmania).

The River Forth is a major river, 47 km (29 mi) long, whose drainage basin covers much of Stirlingshire in Scotland's Central Belt. The Gaelic name is Abhainn Dubh, meaning "black river", in the upper reach above Stirling. Below the tidal reach, (just after being crossed by the M9 motorway) its name is Uisge For.

Forth derives from Proto-Celtic *Vo-rit-ia (slow running), yielding Foirthe in Old Gaelic and Gweryd in Welsh.

The Forth rises in the Trossachs, a mountainous area 30 km (19 mi) west of Stirling. Ben Lomond's eastern slopes drain into the Duchray Water which meets with Avondhu River coming from Loch Ard. The confluence of these two streams is the nominal start of the River Forth. From there it flows roughly eastward, through Aberfoyle, joining with the Kelty Water, about 5 km further downstream. The flat expanse of the Carse of Stirling follows including Flanders Moss. It is joined by the River Teith (which itself drains Loch Venachar, Loch Lubnaig, Loch Achray, Loch Katrine, and Loch Voil) just west of the M9, the next tributary being the Allan Water just east of that motorway. From there it meanders into the ancient port of Stirling. At Stirling the river widens, becomes tidal, and it is here that the last (seasonal) ford of the river exists. From Stirling, the Forth flows east accepting the Bannock Burn from the south before passing the town of Fallin. Two towns of Clackmannanshire are then passed: firstly Cambus (where it is joined by the river Devon), closely followed by Alloa. Upon reaching Airth on the south shore and Kincardine on the north, the river begins to widen and becomes the Firth of Forth.

Settlements on the river

The banks have many settlements including Aberfoyle, Gargunnock, Stirling, Fallin, Cambus, Throsk, Alloa, South Alloa, Dunmore, Airth, and Kincardine. Beyond this the brackish water is usually considered the Firth of Forth.

The meandering Forth viewed from the Wallace Monument. The river flows from right to left, and the former limit of navigation was in the left distance.

In the sixteenth and seventeenth centuries Stirling harbour was a busy port, with goods coming into Scotland and being exported to Europe. Links with the Hansa towns were strong, and Stirling had a particularly close relationship with Bruges in Belgium and Veere (known as Campvere) in the Netherlands. After 1707 much of the trade shifted to the port of Glasgow, as trade with America became the new focus. During the First and Second World Wars, however, Stirling harbour thrived again as a gateway for supplies of tea to Scotland. Trade slowly returned after the wars but the few agricultural merchants based at Stirling found such shipping uncompetitive due to high shore dues levied by the harbour's owners. Today Stirling's harbour is not used but there are plans to redevelop it.

Main article: History of the Forth Crossing 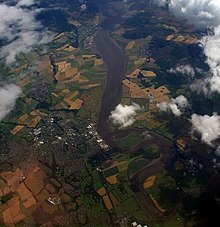 River Forth passing Cambus, Tullibody Inch, and Alloa Inch. Beyond that Alloa and Kincardine. The water is known as the Firth of Forth beyond the Clackmannanshire and Kincardine bridges although the transition point is unclear.

Upstream of Stirling, the river is rather small and is crossed in numerous places (although prior to modern drainage works, the ground was often treacherously marshy near the riverbank). After its confluence with the Teith and Allan, the river is sufficiently wide that a significant bridge is required. A bridge has existed at Stirling since at least the 13th century, and until the opening of the road crossing at Kincardine in 1936, Stirling remained the easternmost road crossing. The Alloa Swing Bridge, a railway bridge between Alloa on the north shore and Throsk on the south opened in 1885 and was closed (and largely demolished) in 1970. Only the metal piers remain. The Clackmannanshire Bridge just upstream of the Kincardine Bridge opened on 19 November 2008. Much further downstream joining North Queensferry and South Queensferry is the famous Forth Bridge (a railway bridge) opened in 1890, and the Forth Road Bridge which opened in 1964. In 2011 construction began on the Queensferry Crossing, to the west of the Forth Road Bridge, which officially opened on 4 September 2017.

Main article: Islands of the Forth

Two islands known as inches form part of the meandering estuarine waters downstream from Stirling. Tullibody Inch near Cambus and Alloa Inch near Alloa are both fairly small and uninhabited.

On film and TV

Template:Attached KML/River Forth
KML is from Wikidata
Retrieved from "https://en.wikipedia.org/w/index.php?title=River_Forth&oldid=1000077063"
Uses material from the Wikipedia article River Forth, released under the CC BY-SA 3.0 license.