STS-28R was the 30th NASA Space Shuttle mission, the fourth shuttle mission dedicated to United States Department of Defense purposes, and the eighth flight of Space Shuttle Columbia. The mission launched on 8 August 1989 and traveled 2.1 million miles during 81 orbits of the Earth, before landing on runway 17 of Edwards Air Force Base, California, on 13 August. STS-28R was also Columbia's first flight since January 1986, when it had flown STS-61-C, the mission directly preceding the Challenger disaster of STS-51-L. The mission details of STS-28 are classified, but the payload is widely believed to have been the first SDS-2 communications satellite. The altitude of the mission was between 295 kilometers (183 mi) and 307 kilometers (191 mi).

The mission was officially designated STS-28R as the original STS-28 designator belonged to STS-51J, the 21st Space Shuttle mission. Official documentation for that mission contained the designator STS-28 throughout. The 'R' stood for 'Recycled'. As STS-51L was designated STS-33, future flights with the STS-26 through STS-33 designators would require the 'R' in their documentation to avoid conflicts in tracking data from one mission to another. 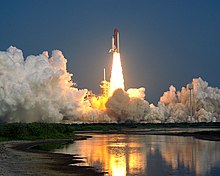 During STS-28R, Columbia deployed two satellites: USA-40 and USA-41. Early reports speculated that STS-28's primary payload was an Advanced KH-11 photo-reconnaissance satellite. Later reports, and amateur satellite observations, suggest that USA-40 was instead a second-generation Satellite Data System relay, similar to those likely launched on STS-38 and STS-53. These satellites had the same bus design as the LEASAT satellites deployed on other shuttle missions, and were likely deployed in the same fashion.

The mission marked the first flight of an 11-pound human skull, which served as the primary element of "Detailed Secondary Objective 469", also known as the In-flight Radiation Dose Distribution (IDRD) experiment. This joint NASA/DoD experiment was designed to examine the penetration of radiation into the human cranium during spaceflight. The female skull was seated in a plastic matrix, representative of tissue, and sliced into ten layers. Hundreds of thermo-luminescent dosimeters were mounted in the skull's layers to record radiation levels at multiple depths. This experiment, which also flew on STS-36 and STS-31, was located in the shuttle's mid-deck lockers on all three flights, recording radiation levels at different orbital inclinations.

During the flight, the crew shut down a thruster in the reaction control system (RCS) after receiving indications of a leak. An RCS heater also malfunctioned during the flight. Post-flight analysis of STS-28 discovered unusual heating of the thermal protection system (TPS) during re-entry, caused by an early transition to turbulent plasma flow around the vehicle. A detailed report identified protruding gap filler as the likely cause. This filler material was the same material that was removed during a spacewalk during STS-114, the Space Shuttle's post-Columbia disaster Return to Flight mission, in 2005.

The Shuttle Lee-side Temperature Sensing (SILTS) infrared camera package made its second flight aboard Columbia on this mission. The cylindrical pod and surrounding black tiles on the orbiter's vertical stabilizer housed an imaging system, designed to map thermodynamic conditions during reentry, on the surfaces visible from the top of the tail fin. Ironically, the camera faced the port wing of Columbia, which was breached by superheated plasma on its disastrous final flight, destroying the wing and, later, the orbiter. The SILTS system was used for only six missions before being deactivated, but the pod remained for the duration of Columbia's career. Columbia's thermal protection system was also upgraded to a similar configuration as Discovery and Atlantis in between the loss of Challenger and STS-28R, with many of the white LRSI tiles replaced with felt insulation blankets in order to reduce weight and turnaround time. One other minor modification that debuted on STS-28R was the move of Columbia's name from its payload bay doors to the fuselage, allowing the orbiter to be easily recognized while in orbit.

This article incorporates public domain material from websites or documents of the National Aeronautics and Space Administration.

Retrieved from "https://en.wikipedia.org/w/index.php?title=STS-28&oldid=996861987"
Uses material from the Wikipedia article STS-28, released under the CC BY-SA 3.0 license.