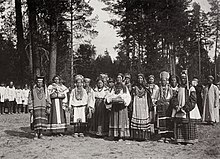 The history of the town can be divided into two different periods. In the earlier history of Russia it was known as one of the holy places of the Russian Orthodox Church, because of its monastery, that gave Russia one of its greatest saints, St. Seraphim. Since the 1940s, it has gradually become the center for research and production of Soviet and later Russian nuclear weapons.

The history of human settlement in the area around Sarov goes back at least to the 12th–13th centuries, when a large Mordvin settlement was founded on its spot. In 1298, the town was taken over by Tatars.

The modern town took its name from being the site of the Sarov Monastery next to the Sarov River. In 1664, an Orthodox monk Theodosius first settled on the Sarov hill. The first Church of Sarov tenement was founded in 1706. Saint Seraphim was living in Sarov from 1778 to 1833. In 1903, the monastery was visited by Tsar Nicholas II and other members of the royal family. At that time the monastery had nine churches, including one underground. Around 320 monks lived in the monastery.

In 1923 the monastery was closed, and the monks were executed by the Bolsheviks. During World War II, the monastery buildings were used as factories for producing rockets for BM-13 "Katyusha" rocket launchers.

In 1946, the All-Union Scientific Research Institute of Experimental Physics—a nuclear weapons design facility that would become known in the West under the acronym VNIIEF—was built. Sarov became a closed city. It was removed from all unclassified maps. Initial provisional names included Base 112, Site 550, Yasnogorsk, Kremlyev and Arzamas-75. Sarov was known as Arzamas-16 until 1995. In 1954, Arzamas-16 was granted town status.

Model of the "Tsar Bomba" in the Sarov atomic bomb museum

The town is home to the Russian Federation Nuclear Center and "Atomic Bomb" museum which has a number of casings of Soviet-era nuclear weapons and photographs of those involved in their production. The main access is by train, which, after a security stop and inspection, is allowed into the town to disembark passengers. The small Sarov Airport is generally for government aircraft only, and visitors usually fly to Nizhny Novgorod airport and then drive.

The town is surrounded by fences patrolled by the military. Foreigners, and even Russians who do not live in Sarov, are not allowed to enter the town without permission. Foreigners who visit on business must surrender their passports, phones, and cameras to security while they are in the facility, though some documentary filmmakers have shot footage inside the town walls.

A large portion of the town is located on the grounds of the P.G.S. State Park in adjacent Temnikovsky District of the Republic of Mordovia.

In 1993, the town became a sister city to Los Alamos, New Mexico, the home of the U.S. nuclear weapons design laboratory (Los Alamos National Laboratory, or LANL). Scientists from LANL and VNIIEF have cooperated on various arms control and nuclear safeguards programs, under which the Los Alamos scientists learned, to their amusement, that their Russian colleagues paid homage to their American rivals by irreverently calling their own laboratory "Los Arzamas."

Boris Yeltsin changed the town's name back to Sarov at the request of the residents in August 1995.

Today the Russian federal nuclear center is responsible for important decisions concerning the development, production, storage, and utilization of nuclear weapons; the recycling of radioactive and other materials; and research in fundamental and applied physics. International foundations have helped to fund some research scientists in Sarov following the downsizing and transitions after the Soviet era. The city's fences and the electrified fences around fissile stores are maintained. In 1998 a resident stated that the perimeter fences also kept the city free from organized crime.

During the 2010 Russian wildfires the Russian Army took preventive forest fire measures and radioactive material was reported to have been secured elsewhere.

On Monday August 12, 2019, flags in Sarov were lowered to half-staff during the viewing of five coffins in Sarov's main square. These were the bodies of five Rosatom workers who were killed during the August 8, 2019, Nyonoksa radiation accident near Severodvinsk at the State Central Navy Testing Range which is the main rocket launching site of the Russian Navy. Later on August 12, 2019, the bodies of the Rosatom workers, who were involved in the development and testing of the 9M730 Burevestnik (Petrel) also known as by the NATO reporting name SSC-X-9 Skyfall, were buried in Sarov's main cemetery.

Sarov is twinned with:

Retrieved from "https://en.wikipedia.org/w/index.php?title=Sarov&oldid=1006761590"
Uses material from the Wikipedia article Sarov, released under the CC BY-SA 3.0 license.