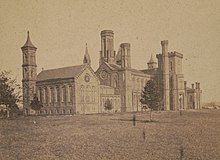 The Smithsonian Institution building in 1864

The Smithsonian Institution Building, located near the National Mall in Washington, D.C. behind the National Museum of African Art and the Sackler Gallery, houses the Smithsonian Institution's administrative offices and information center. The building is constructed of Seneca red sandstone in the Norman Revival style (a 12th-century combination of late Romanesque and early Gothic motifs; built in the Gothic and Romanesque revival styles) and is nicknamed The Castle. It was completed in 1855 and designated a National Historic Landmark in 1965.

The Castle was the first Smithsonian building, designed by architect James Renwick, Jr., whose other works include St. Patrick's Cathedral in New York City and the Smithsonian's Renwick Gallery, also in Washington D.C. The building committee held a nationwide design competition in 1846 and selected Renwick's design by a unanimous vote. A cardboard model of Renwick's winning design survives and is on display in the Castle. Renwick was assisted by Robert Mills, particularly in the internal arrangement of the building.

A statue of Joseph Henry is displayed in front of the building.

Initially intended to be built in white marble, then in yellow sandstone, the architect and building committee finally settled on Seneca red sandstone from the Seneca Quarry in Montgomery County, Maryland. The redstone was substantially less expensive than granite or marble, and while initially easy to work, was found to harden to a satisfactory degree on exposure to the elements. Scholarly evidence indicates it is likely that slaves were employed at Seneca in quarrying stone for the Castle, though no evidence has surfaced that slaves were involved in the actual Castle construction.

Despite the upgraded fireproof construction, a fire in 1865 caused extensive damage to the upper floor of the building, destroying the correspondence of James Smithson, Henry's papers, two hundred oil paintings of American Indians by John Mix Stanley, the Regent's Room and the lecture hall, and the contents of the public libraries of Alexandria, Virginia and Beaufort, South Carolina, confiscated by Union forces during the American Civil War. The ensuing renovation was undertaken by local Washington architect Adolf Cluss in 1865-67. Further fireproofing work ensued in 1883, also by Cluss, who by this time had designed the neighboring Arts and Industries Building. A third and fourth floor were added to the East Wing, and a third floor to the West Wing. Electric lighting was installed in 1895.

Around 1900, the wooden floor of the Great Hall was replaced with terrazzo and a Children's Museum was installed near the south entrance. A tunnel connected to the Arts and Industries Building. A general renovation took place in 1968-70 to install modern electrical systems, elevators and heating, ventilation and air conditioning systems. The Enid A. Haupt Garden was dedicated in 1987, along with the Renwick Gate facing Independence Avenue, built from Seneca redstone retrieved from the demolished D.C. Jail.

East entrance to the building

James Renwick designed the Castle as the focal point of a picturesque landscape on the Mall, using elements from Georg Moller's Denkmäler der deutschen Baukunst. Renwick originally intended to detail the building with entirely American sculptural flora in the manner of Benjamin Henry Latrobe's work at the United States Capitol, but the final work used conventional pattern-book designs.

The building is completed in the Gothic Revival style with Romanesque motifs. This style was chosen to evoke the Collegiate Gothic in England and the ideas of knowledge and wisdom. The façade is built with red sandstone from the Seneca quarry in Seneca, Maryland in contrast to the granite, marble and yellow sandstone from the other major buildings in Washington, D.C.

The building comprises a central section, two extensions or ranges, and two wings. Four towers contain occupiable space, while five smaller towers are primarily decorative, although some contain stairs. As constructed, the central section contained the main entry and museum space (now the Great Hall), with a basement beneath and a large lecture room above. Two galleries on the second floor were used to display artifacts and art. This area is now the Visitor's Information and Associates' Reception area. The East Range contained laboratory space on the first floor and research space on the second. The East Wing contained storage space on the first floor and a suite of rooms on the second as an apartment for the Secretary of the Smithsonian. This space is currently used as administrative offices and archives. The West Range was one story and used as a reading room. The West Wing, known as the chapel, was used as a library. The West Wing and Range are now used as a quiet room for visitors to go.

The plan allowed for expansion at either end, a major reason for the informal medievally-inspired design, which would not suffer if asymmetrically developed.

The Smithsonian Castle houses the administrative offices of the Smithsonian. The main Smithsonian visitor center is also located here, with interactive displays and maps. Computers electronically answer most common questions. A crypt just inside the north entrance houses the tomb of James Smithson.