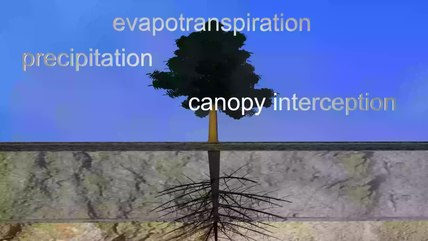 In hydrology, stemflow is the flow of intercepted water down the trunk or stem of a plant. Stemflow, along with throughfall, is responsible for the transferral of precipitation and nutrients from the canopy to the soil. In tropical rainforests, where this kind of flow can be substantial, erosion gullies can form at the base of the trunk. However, in more temperate climates stemflow levels are low and have little erosional power. 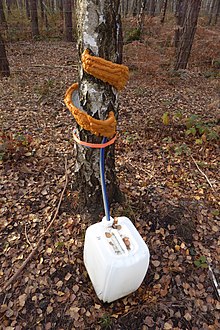 There are a variety of ways stemflow volume is measured in the field. The most common direct measurement currently used is the bonding of bisected PVC or other plastic tubing around the circumference of the tree trunk, connected and funneled into a graduated cylinder for manual or a tipping bucket rain gauge for automatic collection. At times the tubing is wrapped multiple times around the trunk is order to ensure more complete collection.

The primary meteorological characteristics of a rainfall event that influence stemflow are:

Stemflow in oaks is relatively low, due to their textured bark, few and horizontal branches, and high incidence of absorbent epiphytes.

The species of the tree affects the amount of timing and stemflow. The particular morphological characteristics that are key factors are:

In addition to the effects of individual tree species, the overall structure of the forest stand also influences the amount of stemflow that will ultimately occur, these factors are:

Nutrients that have accumulated on the canopy from dry deposition or animal feces are able to directly enter the soil through stemflow. When precipitation occurs, canopy nutrients are leached into the water because of the differences in nutrient concentration between the tree and the rainfall. Conversely, nutrients are taken up by the tree when concentration is lower in the canopy than the rainfall, the presence of epiphytes or lichens also contributes to uptake. The nutrients that enter the soil can also reflect the particular environmental conditions around them, for example, plants located in industrialized areas exhibit higher rates of sulfur and nitrogen (from air pollution), whereas those located near the oceans have higher rates of sodium (from seawater).

Soil acidification can be seen around some stems, for example beech trees from dry deposition.

In forested areas, water is more able to effectively penetrate past the topsoil into deeper layers of the soil horizon along tree roots and their subsequent creation of macropores (termed preferential flow). The loosening of the soil can result in minor landslides.

Main articles: Outline of hydrology and Outline of forestry
Retrieved from "https://en.wikipedia.org/w/index.php?title=Stemflow&oldid=986949968"
Uses material from the Wikipedia article Stemflow, released under the CC BY-SA 3.0 license.