7th and 8th-century monk and writer 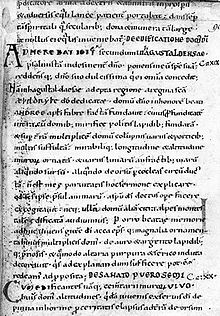 Stephen of Ripon was the author of the eighth-century hagiographic text Vita Sancti Wilfrithi ("Life of Saint Wilfrid"). Other names once traditionally attributed to him are Eddius Stephanus or Æddi Stephanus, but these names are no longer preferred or accepted by historians today; modern usage tends to favor "Stephen."

Very little is known about the life of Stephen of Ripon. The author of the Vita Sancti Wilfrithi identifies himself as "Stephen, a priest". Bede mentions that Wilfrid brought a singing master from Kent, Ædde Stephanus, to Ripon in 669 to teach chant, and he has traditionally been thought to be the same person as the "Stephen" mentioned. However, there is no more solid evidence that the two names describe the same person. If the two were, in fact, the same, Stephen would have been at least twenty years old when he came north, placing him in his sixties or older at Wilfrid's death in 709.

Regardless of whether or not Stephen, the priest, was Wilfrid's singing master from Kent, he appears to have been a follower of Wilfrid and was able to consult individuals who knew Wilfrid closely as sources for the Life of Saint Wilfrid. He wrote for the monks in Ripon, many of whom had known Wilfrid.

Stephen's Life of Saint Wilfrid is the only documentary source on Saint Wilfrid, aside from Bede's Historia Ecclesiastica. It was written shortly after Wilfrid's death in 709. Stephen was asked to write the Life by Acca of Hexham, one of Wilfrid's followers, who later became a bishop and succeeded Wilfrid in the See of Hexham. Although Stephen likely knew Wilfrid personally and had access to others who knew him, he recounts several extraordinary events and makes use of available text sources. He even copies two lines directly from The Anonymous Life of Cuthbert, among other borrowings. However, unlike many early medieval hagiographies which consisted of strings of miracles attributed to saints, Stephen's Life takes the form of a chronological narrative and includes specific names and events.

It is unknown exactly what Stephen hoped to accomplish in writing the Life of Saint Wilfrid, but scholars have several theories. It has been argued that Stephen's use of lines from The Anonymous Life of Cuthbert was a way of outdoing the cult based around Cuthbert and replacing him with Wilfrid. However, Stephen's borrowings make up only a tiny percentage of the whole and are entirely located in the early part of the work, making this theory seem unlikely.

The work is highly biased in favor of Wilfrid and includes explicit comparisons of Wilfrid to Old Testament figures and to the Apostle Paul. Early on, Stephen explains that the community urged him to write the Life. Stephen's goal in writing could simply have been to describe the community's feelings on the holiness and goodness of the life of Wilfrid, whom they had known personally.

Stephen's Life of Saint Wilfrid was one of the first Anglo-Saxon histories, and the earliest to survive. Bede evidently used it as a source for sections of his Historia Ecclesiastica, although he did not acknowledge it.

The Life of Saint Wilfrid is also significant in that it provides a contemporary perspective on events that transpired during Wilfrid's lifetime. For instance, it gives an account of the Synod of Whitby that differs from Bede's. While Stephen's writing has come under more criticism than Bede's, the account found in the Life of Saint Wilfrid reveals political factors that may have affected the Synod alongside the religious controversies described by Bede.

Under his actual or supposed name Eddi, Stephen of Ripon appears in two works by Rudyard Kipling:

Retrieved from "https://en.wikipedia.org/w/index.php?title=Stephen_of_Ripon&oldid=974251894"
Uses material from the Wikipedia article Stephen of Ripon, released under the CC BY-SA 3.0 license.