Form of humour predicated on deliberate violations of causal reasoning

Surreal humour (also known as absurdist humour or surreal comedy) is a form of humour predicated on deliberate violations of causal reasoning, producing events and behaviours that are obviously illogical. Constructions of surreal humour tend to involve bizarre juxtapositions, incongruity, non-sequiturs, irrational or absurd situations and expressions of nonsense.

Surrealism in television follows the theme that "everything seems bizarre, possibly nightmarish, and certainly dream-like."

Absurd and surreal humour is concerned with building expectations and proceeding to knock them down. In these acts, even seemingly masterful characters with the highest standards and expectations are subverted by the unexpected or by plans in collision, which the scene emphasizes for our amusement. Similarly, the goofball or stoic character reacts with dull surprise, dignified disdain, boredom and detached interest, thus heightening comic tension. Characters' intentions are set up in a series of scenes significantly different from what the audience might ordinarily encounter in daily life. The unique social situations, expressed thoughts, actions and comic lines are used to spark excessive emotion, laughter or surprise as to how the events occurred or worked out, in ways sometimes favorable to other unexpectedly introduced characters.

Theatre absurd humour is usually about the insensitivity, paradox, absurdity, and cruelty of the modern world. Absurd and surreal cinema often deals with elements of black humour; that is, disturbing or sinister subjects like death, disease, or warfare are treated with amusement and bitterness, creating the appearance of an intention to shock and offend. 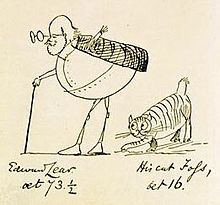 Surreal humour is the effect of illogic and absurdity being used for humorous effect. Under such premises, people can identify precursors and early examples of surreal humour at least since the 19th century, such as in Lewis Carroll's Alice's Adventures in Wonderland and Through the Looking-Glass, both of which use illogical and absurd (hookah-smoking caterpillars, croquet matches using live flamingos as mallets, etc.) for humorous effect. Many of Edward Lear's children’s stories and poems contain nonsense and are basically surreal in approach. For example, The Story of the Four Little Children Who Went Round the World (1871) is filled with contradictory statements and odd images intended to provoke amusement, such as the following:

Relationship with dadaism and futurism

In the early 20th century, several avant-garde movements, including the dadaists, surrealists, and futurists began to argue for an art that was random, jarring and illogical. The goals of these movements were in some sense serious, and they were committed to undermining the solemnity and self-satisfaction of the contemporary artistic establishment. As a result, much of their art was intentionally amusing. 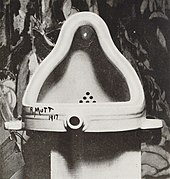 One example is Marcel Duchamp's Fountain (1917), an inverted urinal signed "R. Mutt". This became one of the most famous and influential pieces of art in history, and one of the earliest examples of the found object movement. It is also a joke, relying on the inversion of the item's function as expressed by its title as well as its incongruous presence in an art exhibition.

The word surreal first began to be used to describe a type of aesthetic of the early 1920s.

Surreal humour is also found frequently in avant-garde theatre such as Waiting for Godot and Rosencrantz & Guildenstern Are Dead. In the United States, S. J. Perelman (1904–1979) has been identified as the first surrealist humour writer.

Surrealist humour appeared on British radio from 1951 to 1960 by the cast of The Goon Show: Spike Milligan, Peter Sellers, and Harry Seacombe. The Goons' work influenced the American radio comedy troupe the Firesign Theatre from 1966 to 2012. The Firesigns wrote sophisticated comic radio plays, many of which were recorded on albums.

Surrealist humour is predominantly approached in cinema where the suspension of disbelief can be stretched to absurd lengths by logically following the consequences of unlikely, reversed or exaggerated premises. Luis Buñuel is a principal exponent of this, especially in The Exterminating Angel. It is a prominent feature in the television and cinematic work of the British comedy troupe Monty Python (1969–2015). Other examples include The Falls by Peter Greenaway and Brazil by Terry Gilliam.

Drs. Mary K. Rodgers and Diana Pien analysed the subject in an essay titled "Elephants and Marshmallows" (subtitled "A Theoretical Synthesis of Incongruity-Resolution and Arousal Theories of humour"), and wrote that "jokes are nonsensical when they fail to completely resolve incongruities," and cited one of the many permutations of the elephant joke: "Why did the elephant sit on the marshmallow?" "Because he didn't want to fall into the cup of hot chocolate."

"The joke is incompletely resolved in their opinion," noted Dr. Elliott Oring, "because the situation is incompatible with the world as we know it. Certainly, elephants do not sit in cups of hot chocolate." Oring defined humour as not the resolution of incongruity, but "the perception of appropriate incongruity," that all jokes contain a certain amount of incongruity, and that absurd jokes require the additional component of an "absurd image," with an incongruity of the mental image.