For other uses, see Midlands (disambiguation).
Place in England

A saltire (diagonal cross) may have been used as a symbol of Mercia since the time of King Offa. By the 13th century, the saltire had become the attributed arms of the Kingdom of Mercia. The arms are blazoned Azure, a saltire Or, meaning a gold (or yellow) saltire on a blue field. The saltire is used as both a flag and a coat of arms. As a flag, it is flown from Tamworth Castle, the ancient seat of the Mercian Kings, to this day. The flag also appears on street signs welcoming people to Tamworth, the "ancient capital of Mercia". It was also flown outside Birmingham Council House during 2009 while the Staffordshire Hoard was on display in the city before being taken to the British Museum in London. The cross has been incorporated into a number of coats of arms of Midlands towns, including Tamworth, Leek and Blaby. It was recognised as the Mercian flag by the Flag Institute in 2014. 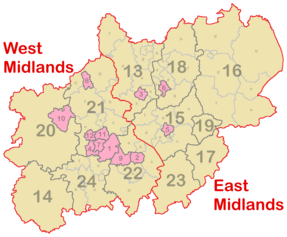 There is no single definition for the Midlands. If defined as being made up of the statistical regions of East Midlands and West Midlands, it includes the counties of Derbyshire, Herefordshire, Leicestershire, Lincolnshire (but excluding North Lincolnshire and North East Lincolnshire), Northamptonshire, Nottinghamshire, Rutland, Shropshire, Staffordshire, Warwickshire, Worcestershire and the West Midlands metropolitan boroughs. If not following the official regional boundaries, the Midlands may also include Peterborough (historically part of Northamptonshire), Finningley (historically part of Nottinghamshire), and the aforementioned boroughs of Lincolnshire.

The West Midlands and East Midlands regions are NUTS 1 statistical regions and were formerly constituencies of the European Parliament. Local government in the Midlands is as follows:

The unitary authorities of North Lincolnshire and North East Lincolnshire (not shown), while classed as part of the ceremonial county of Lincolnshire, actually come under the Yorkshire and the Humber region and are therefore not in the officially recognised East Midlands region.

The largest Midlands conurbation, which includes the cities of Birmingham and Wolverhampton, is roughly covered by the metropolitan county of the West Midlands (which also includes the city of Coventry); with the related City Region extending into neighbouring areas of Shropshire, Staffordshire, Warwickshire and Worcestershire.

Various parts of the Midlands, particularly Warwickshire and Leicestershire, are on occasion referred to as the Heart of England, especially in tourist literature given that the geographic centre of England is generally considered to lie within this arc.

Different areas of the Midlands have their own distinctive character, giving rise to many local history and industrial heritage groups. Nottingham played a notable part in the English Civil War, which is commemorated in a number of place names (Parliament Terrace, Parliament Street, Standard Hill). Areas such as Derbyshire's Amber Valley and Erewash combine attractive countryside with industrial heritage and are home to historic canals and sites associated with the mining industry. The Black Country, broadly the boroughs of Dudley, Sandwell, Wolverhampton and Walsall, played an important part in the Industrial Revolution.

The area is predominantly low-lying and flat apart from isolated hills such as Turners Hill within the Black Country conurbation (at 271 m / 889 ft) with extensive views. Upland areas lie in the west and north of the region with the Shropshire Hills to the west, close to the England–Wales border and the Peak District area of the southern Pennines in the north of the region. The Shropshire Hills reach a height of 540 m (1,771 ft) at Brown Clee Hill and includes the Long Mynd, Clee Hills and Stiperstones ridge. Wenlock Edge, running through the middle of the Shropshire Hills Area of Outstanding Natural Beauty (AONB), is a long, low ridge, which extends for over 15 miles (24 km). The Peak District reaches heights of between 300 m and 600 m; Kinder Scout is the highest point at 636 m (2,086 ft). Further south, the Welsh border reaches over 700 m high, at Black Mountain, which at 703 m (2,306 ft) is thus the highest point in Herefordshire.

The Malverns are formed of some of the oldest rock in England (around 680 million years old) and extend for 8 miles (13 km) through two West Midlands counties (Worcestershire and Herefordshire) as well as northern Gloucestershire in the southwest. The highest point of the hills is the Worcestershire Beacon at 425 m (1,394 ft) above sea level (OS Grid reference SO768452).

The Cotswolds – designated an AONB in 1966. – extend for over 90 miles (140 km) through Oxfordshire, Gloucestershire, Wiltshire, Somerset, Warwickshire, and Worcestershire. They reach a highest point of 330 m (1,082 ft) at Cleeve Hill.

Areas of lower hills, in the range 200 m - 300 m, include Charnwood Forest in Leicestershire, Cannock Chase in Staffordshire, and the Lincolnshire Wolds (100 m - 200 m); the latter having some prominence despite their modest altitude given their location in typically low-lying Lincolnshire near to the east coast.

Retrieved from "https://en.wikipedia.org/w/index.php?title=Midlands&oldid=1006614577"
Uses material from the Wikipedia article Midlands, released under the CC BY-SA 3.0 license.