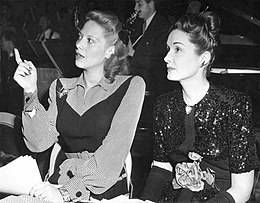 Dinah Shore and Gail Patrick in the CBS Radio studio at a rehearsal for "Belle of the Yukon" (February 12, 1945)

The series began with a variety format, with mixed success. The program increasingly came to rely on adaptations of major motion pictures—presenting a considerable challenge to writers who had to compress the narrative into 22 minutes.

Fees these actors would typically charge were donated to the Motion Picture Relief Fund, in order to support the creation and maintenance of the Motion Picture Country Home for retired actors. A 1940 magazine article noted that The Screen Guild Theater was "the only sponsored program on the air which gives all its profits to charity." Nearly $800,000 had been contributed by the summer of 1942.

The first three seasons of the CBS series were sponsored by Gulf Oil. With uncertainties in the oil market due to World War II, Gulf dropped the show, and in 1942 the Lady Esther cosmetics corporation assumed sponsorship. The Lady Esther Screen Guild Theater was consistently one of the top ten radio programs. Reverses in the cosmetics industry led Lady Esther to withdraw in 1947, and Camel Cigarettes purchased a three-year contract. Changing time slots and networks brought about a decline in ratings. In the fall of 1950 the series returned to CBS, where it ran until its final broadcast June 30, 1952. The Screen Guild Theater earned a total of $5,235,607 for the Motion Picture Relief Fund.

Shirley Temple's parents declined an offer of $35,000 for her to perform a radio version of The Blue Bird on a commercial broadcast; instead, she presented it on the Screen Guild program without payment. An attempt was made on her life during the show. As Temple was singing "Someday You'll Find Your Bluebird", a woman in the audience rose from her seat and pulled out a handgun, pointing it directly at her. The woman hesitated and was disarmed. It was later discovered that she had lost a child on the day it was publicly stated that Temple was born, and blamed her for stealing her daughter's soul.

The series benefited during its 1950–51 season on ABC, when it was expanded to a full hour. Few broadcasts are known to have survived in radio collections:

The Screen Guild Theater was hosted by George Murphy in 1939, and Roger Pryor for the remainder of its run.

Uses material from the Wikipedia article "The Screen Guild Theater", released under the CC BY-SA 3.0 license.