Portable radio receiver
This article is about an electronic device. For the fourth studio album by M. Ward, see Transistor Radio (album).

A classic Emerson transistor radio, circa 1958

The pocket size of transistor radios sparked a change in popular music listening habits, allowing people to listen to music anywhere they went. Beginning around 1980, however, cheap AM transistor radios were superseded initially by the boombox and the Sony Walkman, and later on by digitally-based devices with higher audio quality such as portable CD players, personal audio players, MP3 players and (eventually) by smartphones, many of which contain FM radios. 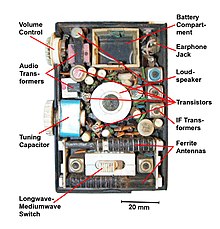 A seven-transistor USSR radio Orljonok with the back open, showing parts.

Before the transistor was invented, radios used vacuum tubes. Although portable vacuum tube radios were produced, they were typically bulky and heavy. The need for a low voltage high current source to power the filaments of the tubes and high voltage for the anode potential typically required two batteries. Vacuum tubes were also inefficient and fragile compared to transistors and had a limited lifetime.

Bell Laboratories demonstrated the first transistor on December 23, 1947. The scientific team at Bell Laboratories responsible for the solid-state amplifier included William Shockley, Walter Houser Brattain, and John Bardeen. After obtaining patent protection, the company held a news conference on June 30, 1948, at which a prototype transistor radio was demonstrated.

There are many claimants to the title of the first company to produce practical transistor radios, often incorrectly attributed to Sony (originally Tokyo Telecommunications Engineering Corporation). Texas Instruments had demonstrated all-transistor AM (amplitude modulation) radios as early as May 25, 1954, but their performance was well below that of equivalent vacuum tube models. A workable all-transistor radio was demonstrated in August 1953 at the Düsseldorf Radio Fair by the German firm Intermetall. It was built with four of Intermetall's hand-made transistors, based upon the 1948 invention of the "Transistor"-germanium point-contact transistor by Herbert Mataré and Heinrich Welker. However, as with the early Texas Instruments units (and others) only prototypes were ever built; it was never put into commercial production. RCA had demonstrated a prototype transistor radio as early as 1952, and it is likely that they and the other radio makers were planning transistor radios of their own, but Texas Instruments and Regency Division of I.D.E.A., were the first to offer a production model starting in October 1954. 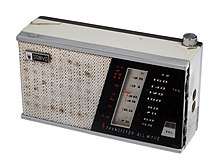 Sanyo 8S-P3 transistor radio, which received AM and shortwave bands.

The use of transistors instead of vacuum tubes as the amplifier elements meant that the device was much smaller, required far less power to operate than a tube radio, and was more resistant to physical shock. Since the transistor's base element draws current, its input impedance is low in contrast to the high input impedance of the vacuum tubes. It also allowed "instant-on" operation, since there were no filaments to heat up. The typical portable tube radio of the fifties was about the size and weight of a lunchbox and contained several heavy, non-rechargeable batteries — one or more so-called "A" batteries to heat the tube filaments and a large 45- to 90-volt "B" battery to power the signal circuits. By comparison, the transistor radio could fit in a pocket and weighed half a pound or less, and was powered by standard flashlight batteries or a single compact 9-volt battery. The 9-volt battery was introduced for powering transistor radios. 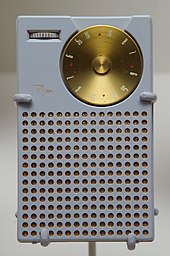 Two companies working together, Texas Instruments of Dallas, and Industrial Development Engineering Associates (I.D.E.A.) of Indianapolis, Indiana, were behind the unveiling of the Regency TR-1, the world's first commercially produced transistor radio. Previously, Texas Instruments was producing instrumentation for the oil industry and locating devices for the U.S. Navy and I.D.E.A. built home television antenna boosters. The two companies worked together on the TR-1, looking to grow revenues for their respective companies by breaking into this new product area. In May 1954, Texas Instruments had designed and built a prototype and was looking for an established radio manufacturer to develop and market a radio using their transistors. (The Chief Project Engineer for the radio design at Texas Instruments' headquarters in Dallas, Texas was Paul D. Davis, Jr., who had a degree in Electrical Engineering from Southern Methodist University. He was assigned the project due to his experience with radio engineering in World War II.) None of the major radio makers including RCA, GE, Philco, and Emerson were interested. The President of I.D.E.A. at the time, Ed Tudor, jumped at the opportunity to manufacture the TR-1, predicting sales of the transistor radios at "20 million radios in three years". The Regency TR-1 was announced on October 18, 1954, by the Regency Division of I.D.E.A., was put on sale in November 1954 and was the first practical transistor radio made in any significant numbers. Billboard reported in 1954 that "the radio has only four transistors. One acts as a combination mixer-oscillator, one as an audio amplifier, and two as intermediate-frequency amplifiers." One year after the release of the TR-1 sales approached the 100,000 mark. The look and size of the TR-1 was well received, but the reviews of the TR-1's performance were typically adverse. The Regency TR-1 is patented by Richard C. Koch, US 2892931 , former Project Engineer of I.D.E.A.

The circuit of a Japanese 5 transistor radio.

While on a trip to the United States in 1952, Masaru Ibuka, founder of Tokyo Telecommunications Engineering Corporation (now Sony), discovered that AT&T was about to make licensing available for the transistor. Ibuka and his partner, physicist Akio Morita, convinced the Japanese Ministry of International Trade and Industry (MITI) to finance the $25,000 licensing fee (equivalent to $240,695 today). For several months Ibuka traveled around the United States borrowing ideas from the American transistor manufacturers. Improving upon the ideas, Tokyo Telecommunications Engineering Corporation made its first functional transistor radio in 1954. Within five years, Tokyo Telecommunications Engineering Corporation grew from seven employees to approximately five hundred.

Other Japanese companies soon followed their entry into the American market and the grand total of electronic products exported from Japan in 1958 increased 2.5 times in comparison to 1957.

In August 1955, while still a small company, Tokyo Telecommunications Engineering Corporation introduced their TR-55 five-transistor radio under the new brand name Sony. With this radio, Sony became the first company to manufacture the transistors and other components they used to construct the radio. The TR-55 was also the first transistor radio to utilize all miniature components. It is estimated that only 5,000 to 10,000 units were produced. 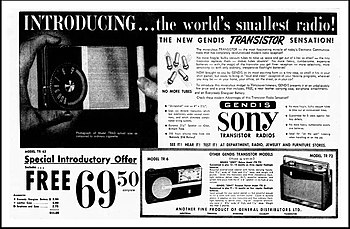 The TR-63 was introduced by Sony to the United States in December 1957. The TR-63 was 6 mm (1⁄4 in) narrower and 13 mm (1⁄2 in) shorter than the original Regency TR-1. Like the TR-1 it was offered in four colors: lemon, green, red, and black. In addition to its smaller size, the TR-63 had a small tuning capacitor and required a new battery design to produce the proper voltage. It used the nine-volt battery, which would become the standard for transistor radios. Approximately 100,000 units of the TR-63 were imported in 1957. This "pocketable" (the term "pocketable" was a matter of some interpretation, as Sony allegedly had special shirts made with oversized pockets for their salesmen) model proved highly successful.

The TR-63 was the first transistor radio to sell in the millions, leading to the mass-market penetration of transistor radios. The TR-63 went on to sell seven million units worldwide by the mid-1960s. With the visible success of the TR-63, Japanese competitors such as Toshiba and Sharp Corporation joined the market. By 1959, in the United States market, there were more than six million transistor radio sets produced by Japanese companies that represented $62 million in revenue.

Prior to the Regency TR-1, transistors were difficult to produce. Only one in five transistors that were produced worked as expected (only a 20% yield) and as a result the price remained extremely high. When it was released in 1954, the Regency TR-1 cost $49.95 (equivalent to $476 today) and sold about 150,000 units. Raytheon and Zenith Electronics transistor radios soon followed and were priced even higher. In 1955, Raytheon's 8-TR-1 was priced at $80 (equivalent to $764 today). By November 1956 a transistor radio small enough to wear on the wrist and a claimed battery life of 100 hours cost $29.95. 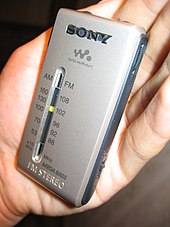 Transistor radios were extremely successful because of three social forces — a large number of young people due to the post–World War II baby boom, a public with disposable income amidst a period of prosperity, and the growing popularity of rock 'n' roll music. The influence of the transistor radio during this period is shown by its appearance in popular films, songs, and books of the time, such as the movie Lolita.

Since the 1980s, the popularity of radio-only portable devices declined with the rise of portable audio players which allowed users to carry and listen to tape recorded music of their choosing and may additively came with a radio tuner. This began in the late 1970s with boom boxes and portable cassette players such as the Sony Walkman, followed by portable CD players. A common type now is the portable digital audio player. This type of device is a popular choice with listeners who are dissatisfied with terrestrial music radio because of a limited selection of music and reception problems. However, transistor radios are still popular for news, talk radio, weather, live sporting events, and emergency alert applications.