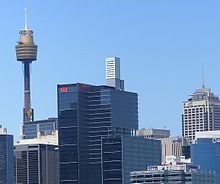 Weather beacon barometer atop the Westpac Place building in Sydney

A weather beacon is a beacon that indicates the local weather forecast in a code of colored or flashing lights. Often, a short poem or jingle accompanies the code to make it easier to remember.

The beacon is usually on the roof of a tall building in a central business district, but some are attached to towers. The beacons are most commonly owned by financial services companies and television stations and are part of advertising and public relations programs. They provide a very basic forecast for the general public and not as an aid to navigation.

In addition to displaying weather forecasts, some weather beacons have been used to signal victory or defeat for a professional sports home team.

In 1898 on the orders of U.S. President William McKinley, coastal warning display towers were installed along the coast of the United States. In 1936, the Weather Girl sculptures were installed in City Hall Square in Copenhagen. In 1938, Douglas Leigh, designed a Coca-Cola billboard with a weather forecast display at Columbus Circle in New York City.

The first attempt to create a weather beacon as a form of advertising was from Douglas Leigh, who, in 1941, arranged a lighting scheme for the Empire State Building to display a weather forecast code with a decoder to be packaged with Coca-Cola bottles. The plan was never implemented because of the attack on Pearl Harbor later that year. Leigh resurrected his idea in Minneapolis in October 1949 with the Northwestern National Bank Weatherball.

In Australia, the Mutual Life and Citizens insurance company installed weather beacons atop its buildings in 1957 and 1958.

Weather beacons were most popular during the 1950s and 1960s.