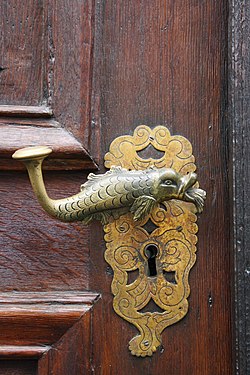 Fish-shaped door handle from Germany, an example of a zoomorphic artwork

The word zoomorphism derives from the Greek ζωον (zōon), meaning "animal", and μορφη (morphē), meaning "shape" or "form". In the context of art, zoomorphism could describe art that imagines humans as non-human animals. It can also be defined as art that portrays one species of animal like another species of animal or art that uses animals as a visual motif, sometimes referred to as "animal style." In ancient Egyptian religion, deities were depicted in animal form which is an example of zoomorphism in not only art but in a religious context. It is also similar to the term therianthropy; which is the ability to shape shift into animal form, except that with zoomorphism the animal form is applied to a physical object. It means to attribute animal forms or animal characteristics to other animals, or things other than an animal; similar to but broader than anthropomorphism. Contrary to anthropomorphism, which views animal or non-animal behavior in human terms, zoomorphism is the tendency of viewing human behavior in terms of the behavior of animals. It is also used in literature to portray the act of humans or objects with animalistic behavior or features. The use of zoomorphism served as a decorative element to objects that are typically quite simple in shape and design. 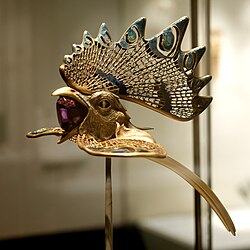 The 'Cockerel' diadem, from Calouste Gulbenkian Museum (Lisbon, Portugal), made between 1897 and 1898 by René Lalique 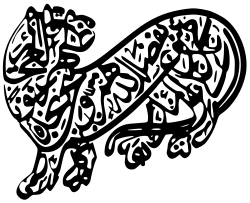 Calligram of a tiger in Arabic script, an example of zoomorphic calligraphy

Desmond Morris in The Naked Ape and The Human Zoo, Robert Ardrey in African Genesis and Konrad Lorenz in On Aggression all wrote from a sociobiological perspective. They viewed the human species as an animal, subject to the evolutionary law of Survival of the fittest through adaptation to the biophysical environment. 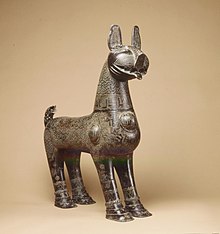 Islamic art provides countless examples of zoomorphism in art objects and as these objects come from an Islamic heritage, they are often removed from a religious context due to the aniconic tradition of not depicting religious figures, people, or animals. Therefore, most animal figurative representation in Islamic art comes from secular objects. The zoomorphic style allows artists to stylize animal forms and designs, a tradition that has been present as early as the seventh century after the spread of Islam beyond the Arabian Peninsula.

One example of a zoomorphic object is the incense burner of Amir Saif al-Dunya wa’l-Din ibn Muhammad al-Mawardi, today located at the Metropolitan Museum in New York. Incense burners were common objects for zoomorphic forms that served as a container for aromatic material to be burned. This particular object comes from the Seljuq period in Iran. It is made of bronze, meaning it was a more expensive object as metalwork incense burners cost more to produce and were less common than other productions made of clay or soft stones. The work is meant to depict a lion or large cat. The artist plays with the anatomical elements of the body to fit the use for burning incense. Around the base of neck shows the area where the head is designed to be removed for the insertion of coal and incense. Throughout the body small holes were punctured for the release of the smoke. This object would have been found in a domestic space due to the animal-like imagery.

Another example of zoomorphism in Islamic art is the bird-shaped oil lamp, located at the Metropolitan Museum of Art in New York. The oil lamp would have been used as an everyday object in a domestic space as well. The handle of the lamp is depicted by the head and neck of the bird. The body takes the form of the base of the lamp where oil can be poured in the small opening. The artist uses the form of the bird to utilize the lamp either hanging or resting. There are keyholes on either side of the body for the lamp to be hung by a chain and the flat base allows for the lamp to be placed on any smooth surface. The similarities between the incense burner and the lamp demonstrate how zoomorphism was used throughout Islamic culture. 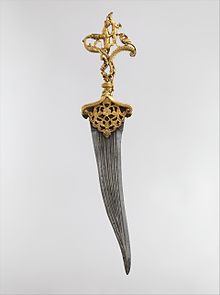 Dagger with Zoomorphic Hilt, dated to the second half 16th century, Hilt made of copper; cast, chased, gilded, and inlaid with rubies, Blade made of steel; forged, L: 15 5/8 in.

Zoomorphism appears on objects beyond household items. An example of this is the Dagger with Zoomorphic Hilt also located at the Metropolitan Museum of Art in New York. The hilt or handle of the dagger merges into the shape of a dragon attacking a lion who is performing the same act onto a deer. Each attacking animal is connected by its claws and teeth to form the handle. The inclusion of Persian and Indian symbols of power was common in zoomorphic imagery on hilts of daggers. In this dagger there is a figure of a bird in front of the deer who is meant to represent the Indian deity Garuda. Due to the intricate design and craftsmanship of this dagger, it would most likely not have been used for the purposes of a weapon, but rather as a ceremonial object. Many of the weapons included in Islamic art served as symbols for power and wealth.

Retrieved from "https://en.wikipedia.org/w/index.php?title=Zoomorphism&oldid=998227509"
Uses material from the Wikipedia article Zoomorphism, released under the CC BY-SA 3.0 license.