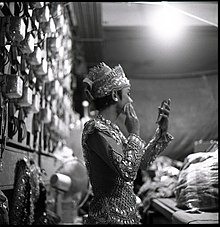 Culture is a word for the 'way of life' of groups of people, meaning the way they do things. Different groups may have different cultures. A culture is passed on to the next generation by learning, whereas genetics are passed on by heredity. Culture is seen in people's writing, religion, music, clothes, cooking and in what they do.

The concept of culture is very complicated, and the word has many meanings. The word 'culture' is most commonly used in three ways.

Most broadly, 'culture' includes all human phenomena which are not purely results of human genetics. The discipline which investigates cultures is called anthropology, though many other disciplines play a part.

Cultures are what making the country unique and interesting. Each country has different cultural activities and cultural rituals. Culture includes material goods, the things the people use and produce. Culture is also the beliefs and values of the people and the ways they think about and understand the world and their own lives.

Different countries have different cultures. For example, some older Japanese people wear kimonos, arrange flowers in vases, and have tea ceremonies. Some countries oppose some things in their culture, like discrimination or religion.

A group who acts or speaks differently may be said to be, or have, a subculture.

Ethnic groups such as the Romani people in Europe have a distinct culture.

Companies or other organizations (groups of people) can have a separate culture. Japanese manufacturing companies often have a different culture to Western companies; the workday starts with exercise, and the workers are very loyal to the company.

Companies in the high-technology sector often have a different culture than other companies. Software and computer companies sometimes allow employees to play games during the workday, or take time off work to relax, because these companies believe that this will help the workers to think better.

Anthropology is studying human beings and how they relate to each other. An anthropologist is a person who studies anthropology. Anthropologists study how culture shapes people and their lives. Cultures constantly change as people move and communicate with new groups of people.

For example, immigrants (people who move from one country to another) may keep some of their customs and traditions from their old country. By keeping their culture in this way, they bring pieces of their culture to a new place where others begin to experience it.

Retrieved from "https://simple.wikipedia.org/w/index.php?title=Culture&oldid=7393995"
Uses material from the Wikipedia article Culture, released under the CC BY-SA 3.0 license.