This article is about the year 1492. For other uses, see 1492 (disambiguation).
Calendar year

1492 is considered to be a significant year in the history of the West, Europe, Christianity, Islam, Judaism, Spain, and the New World, among others, because of the number of significant events to have taken place during it. Some of the events which propelled the year into Western consciousness, also listed below, include the completion of the Reconquista of Spain, Europe's discovery of the New World, and the expulsion of Jews from Spain.

January 2 – Muhammad XII, last Moorish Emir of Granada, surrenders his city to the army of Ferdinand and Isabella. 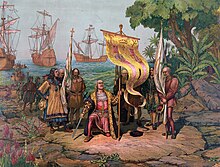