The 2020 Irish general election took place on Saturday 8 February, to elect the 33rd Dáil Éireann, the lower house of Ireland's parliament. All but one of the 160 seats were contested, with the Ceann Comhairle (speaker) being returned automatically. The members, Teachtaí Dála (TDs), were elected by single transferable vote from all of the multi-member constituencies. The election was called following the dissolution of the 32nd Dáil by the president, at the request of Taoiseach Leo Varadkar on 14 January 2020. It was the first election since 1918 to be held on a weekend.

International news outlets have described the result as a historic break from the two-party system, as it was the first time in almost a century that neither Fianna Fáil nor Fine Gael won the most votes. Furthermore, the combined vote share of the two traditional main parties fell to a historic low. The leaders of those parties had long ruled out forming a coalition government with Sinn Féin.

Since the 2016 Irish general election, Fine Gael led a minority government with the support of Independent TDs, including the Independent Alliance. It relied on a confidence and supply agreement with Fianna Fáil.

On 3 December 2019, a motion of no confidence in the Minister for Housing, Planning and Local Government Eoghan Murphy proposed by Catherine Murphy for the Social Democrats was defeated, with 53 votes in favour to 56 votes against and 35 registered abstentions. On 9 January 2020, Independent TD Michael Collins called for a motion of no confidence in the Minister for Health Simon Harris. On 14 January, Taoiseach Leo Varadkar sought a dissolution of the Dáil which was granted by the president, with the 33rd Dáil to convene on 20 February at 12 noon. The election was set for 8 February, which was to be the first time a general election was held on a Saturday since 1918. 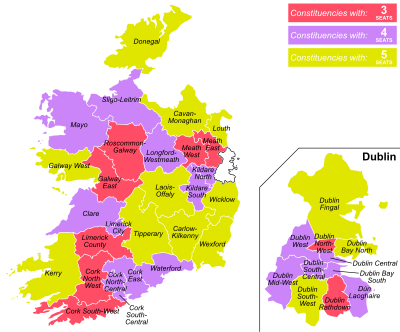 Dáil constituencies used in the 2020 election.

159 of the 160 members of Dáil Éireann were elected by single transferable vote (STV) from 39 constituencies, each returning between three and five TDs (Dáil deputies). Voters complete a paper ballot, numbering candidates 1, 2, 3, etc. for 1st, 2nd, 3rd, etc. preference. Ballots are sent to the constituency count centre after polls close and are counted the following morning over several counts. In STV, each ballot is initially credited to its first-preference candidate but may be transferred on later counts to the next available preference where the first preference candidate is elected or eliminated.

A Constituency Commission, convened in July 2016 under the provisions of the Electoral Act 1997 with Judge Robert Haughton as chair, made recommendations on changes to constituency boundaries after publication of initial population data from the 2016 census. The Commission had some discretion but was constitutionally bound to allow no more than a ratio of 30,000 people per elected member, and was required by law to recommend constituencies of three, four or five seats, and to avoid – as far as was practicable – breaching county boundaries. The Commission report, released on 27 June 2017, recommended an increase in the number of TDs from 158 to 160 elected in 39 constituencies. These changes were implemented by the Electoral (Amendment) (Dáil Constituencies) Act 2017. The election of the 33rd Dáil is therefore being held using the new boundaries, for 160 seats.

As the outgoing Ceann Comhairle, Seán Ó Fearghaíl, did not announce his retirement, he was automatically returned, and the remaining 159 of the 160 seats were up for election.

The following members of the 32nd Dáil did not seek re-election.

The campaign officially began after the dissolution of Dáil Éireann on 14 January 2020 and lasted until polling day on 8 February 2020. the Polling was just over a week after the United Kingdom (which includes Northern Ireland) withdrew from the European Union, making it the first major election to be held within the EU since Brexit. The election took place on a Saturday for the first time since the 1918 election. Leo Varadkar said that the change of day was to prevent school closures (many schools in Ireland are used as polling stations) and to make it easy for third-level students and those working away from home to vote.

Nomination of candidates closed on Wednesday, 22 January. A record number of women were nominated, with 162 of the 531 candidates. This was the first Irish general election in which there was a female candidate running in every constituency. If a party does not have a minimum of 30% male and 30% female candidates, it forfeits half of their state funding. At close of nominations, Fine Gael had 30.5% female candidates, Fianna Fáil had 31%, Labour had 32%, Sinn Féin had 33%, People Before Profit had 38%, the Green Party had 41%, and the Social Democrats had 57%, all passing the quota.

Voter registration via the Supplementary Register of Voters closed on 23 January, with very high registration taking place on the last day – Dublin City Council, for example, reporting 3,500 registrations on the final day allowed, and a total of 14,000 additional registrations, reported to be twice the normal amount for a general election.

On 3 February 2020, the returning officer for Tipperary cancelled the writ of election there, as required by Section 62 of the Electoral Act 1992, after the death of candidate Marese Skehan. However, the Minister for Housing, Planning and Local Government formed a view that the 1992 provision breached the constitutional requirement that elections take place within 30 days of a Dáil dissolution, so on 5 February he issued a Special Difficulty Order allowing the election to proceed on the same date as other constituencies. Skehan's name remained on the ballot paper.

The first leaders' debate took place on Virgin Media One on 22 January, but was restricted to Leo Varadkar and Micheál Martin.

On 27 January, RTÉ published an article explaining its rationale as to whom it invited to appear in televised leadership debates. Aontú announced that it would seek a High Court injunction in order to prevent the broadcast of the leaders' debate scheduled for the same day but later in the day they announced that they would not proceed with the action.

A further RTÉ debate was scheduled for 4 February, again on RTÉ One, and featuring only Varadkar and Martin. Mary Lou McDonald, leader of Sinn Féin, had objected to her exclusion, and Sinn Féin threatened legal action if it was excluded from this debate. On 3 February, RTÉ announced that it had invited McDonald to participate in the final debate, in part due to Sinn Féin's standing in recent opinion polls, and Sinn Féin confirmed that it would accept the invitation.

A final debate between the leader of smaller parties took place on 6 February on RTÉ One.

Opinion polls on voting intentions were conducted regularly. Polls were published on an approximately monthly basis by The Sunday Business Post (which uses the Red C polling company) and The Sunday Times (which used the Behaviour and Attitudes polling company for all of its polls since 2016 until its final poll prior to the election, for which it used Panelbase).

Less frequent polls were published by The Irish Times, Sunday Independent, Irish Mail on Sunday, RTÉ News, and others.

The chart below depicts the results of opinion polls since the previous general election. 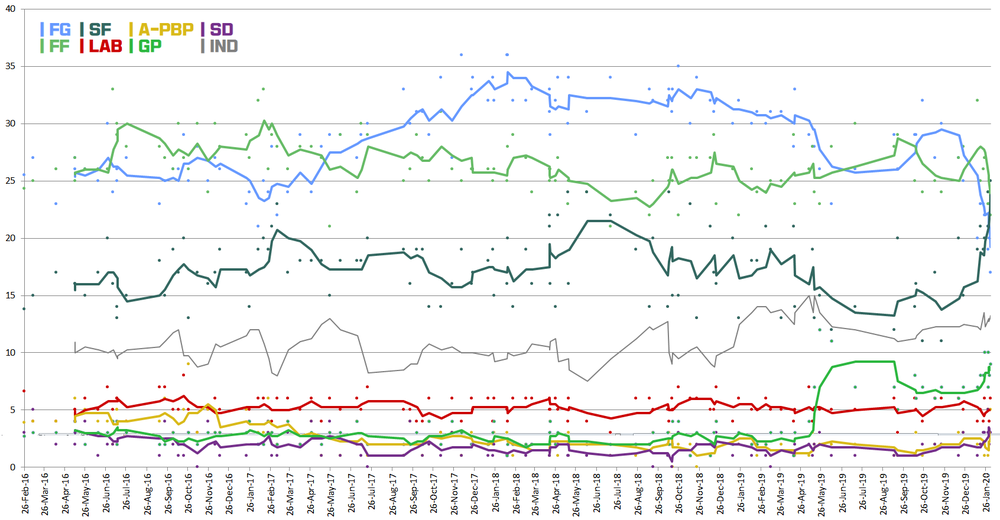 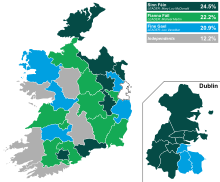 Map showing the party winning the most first-preference votes in each constituency.

Polls opened at 07:00 UTC and closed at 22:00 UTC. The total poll was down by 2.2% to 62.9% compared to the previous election, despite it being held on a Saturday. However, severe weather warnings were in place over much of the country due to Storm Ciara.

The results of the election showed a close contest between three parties. Sinn Féin which won 37 seats, a gain of fifteen over the previous election. Fianna Fáil also won 37 seats, eight fewer than they had. Fine Gael, the party of Taoiseach Leo Varadkar, won 35 seats, twelve fewer than they had. Among the smaller parties, the Green Party showed the largest gains, increasing from three to twelve seats, a gain of nine over the previous election. In terms of popular vote, despite their close second place finish in terms of parliamentary seats, Sinn Féin received the most first-preference votes nationwide, though no single party secured more than 25% of the first-preference votes, nor more than 25% of the seats. According to DCU political scientist Eoin O'Malley, it was the most fragmented Dáil ever, with the effective number of parties at 5.95.

Because the Ceann Comhairle (speaker), Seán Ó Fearghaíl, did not stand down, his seat was not contested and he was returned automatically. As he was a Fianna Fáil member, this gave the party 38 Dáil members. That number dropped to 37 when Ó Fearghaíl was re-elected as Ceann Comhairle on the Dáil's first sitting.

Journalists commented on the effects of Sinn Féin's late surge and unexpectedly high first-preference vote. John Drennan listed eleven constituencies where it might have won another seat had it run an extra candidate. Marie O'Halloran said Sinn Féin transfers affected the outcome of 21 constituencies, favouring other left-wing parties. Sean Murray noted that Solidarity–People Before Profit benefited most from Sinn Féin transfers.

The Social Democrats had their best-ever result, with 6 seats; they attributed this to focusing their efforts on winnable seats rather than fielding candidates in every constituency.

The Green Party also had their best-ever result, with 12 seats, reflecting increased interest in environmentalism and climate change in Ireland.

On the other hand, far-right and anti-immigration parties (the National Party, Irish Freedom Party, Renua and Anti-Corruption Ireland) fared very poorly, winning less than two percent wherever they stood. However, some independent politicians who had expressed anti-immigration views were elected, like Verona Murphy and Noel Grealish.

TDs who lost their seats

As there are 160 members of Dáil Éireann (including the Ceann Comhairle who casts a vote only in the case of a tie), 80 TDs are needed to form a governing coalition. A smaller group could form a minority government if they can negotiate a confidence and supply agreement with another party.

During the campaign, the leaders of both Fine Gael and Fianna Fáil ruled out forming a coalition government with Sinn Féin.

Some in Fianna Fáil were reported to favour going into coalition with Sinn Féin over renewing an arrangement with Fine Gael. Sinn Féin leader Mary Lou McDonald announced her intention to try to form a coalition government without either Fine Gael or Fianna Fáil. However, she did not rule out a coalition with either party. After the results came in on 10–11 February, Taoiseach Leo Varadkar continued to rule out a Fine Gael coalition with Sinn Féin, while Micheál Martin changed tack and left open the possibility of a Fianna Fáil–Sinn Féin coalition or a "grand coalition" with Fine Gael. On 12 February, Varadkar conceded that Fine Gael would likely go into opposition. Varadkar argued that since Sinn Féin finished with the highest vote, it had the responsibility to build a coalition that allows it to keep its campaign promises, and that Fine Gael was "willing to step back" to allow Sinn Féin to do so.

Sinn Féin have also stated an intention to form a broad left coalition; combined, left-leaning parties have 67 seats (37 Sinn Féin, 12 Green, 6 Labour, 6 Social Democrats, 5 Solidarity–PBP, and 1 Independents 4 Change), but other parties of the left have raised doubts about such a prospect. In addition, Sinn Féin would need the support of at least 13 independents (out of 19 total) to form a government.

A Fianna Fáil–Fine Gael grand coalition would have 72 seats and so would need support from smaller parties or independents to form a government. A Fianna Fáil–Sinn Féin coalition would have 74 seats, which would also require smaller party or independent support. These three options in an opinion poll the week after the election received respective support from 26%, 26%, and 19% of voters, with 15% preferring another election.