"7 Rings" (stylized in all lowercase) is a song recorded by American singer Ariana Grande for her fifth studio album Thank U, Next (2019). The song was written by Grande, Victoria Monét, Tayla Parx, Njomza Vitia and Kaydence alongside its producers Tommy Brown, Charles Anderson and Michael Foster. It contains an interpolation of "My Favorite Things" by Rodgers and Hammerstein, thus both are also credited as songwriters. It was released by Republic Records on January 18, 2019, as the second single from the album. The music video, directed by Hannah Lux Davis, accompanied its release the same day. A remix featuring American rapper 2 Chainz was released on February 1, 2019.

"7 Rings" debuted at number one on the Billboard Hot 100, earning Grande her second number one single (and second number one debut), where it spent 8 non-consecutive weeks atop the chart, becoming her longest running number one single to date. Therefore, it became Ariana Grande's highest song to crack the Billboard Decade-End in the 2010s, peaking at 69 behind "Need You Now" by Lady Antebellum. This was one of the two songs that Ariana Grande has cracked the Billboard Decade-End. The other song was "Thank U, Next" peaking at 75 behind "Rude" by MAGIC!. In addition, the single is also Grande's longest chart runner on the Hot 100 to date, spending 33 consecutive weeks before dropping out. The song also topped the charts in 19 countries, and reached the top 10 in 10 countries. "7 Rings" was nominated for Record of the Year and Best Pop Solo Performance at the 62nd Annual Grammy Awards.

The song has sold 13.3 million units (combined sales and track-equivalent streams), becoming the fifth best-selling song worldwide for 2019. As of 2020, it is one of the best selling songs in digital history.

A few weeks prior to the track's release, Republic Records contacted Imagem/Concord Music, who owns the Rodgers & Hammerstein publishing rights, and agreed to give them 90 percent of the song's songwriting royalties, in order to acquire the rights to release the song. Grande first teased the track in the music video for "Thank U, Next", in which the first few seconds of the instrumental are used in the opening sequence, and the license plate of the car she drives reads "7 RINGS". The day after the video was released, Grande confirmed the existence of "7 Rings" and revealed the moment that inspired it on Twitter.

The singer described the song as "a friendship anthem", later posting the single's artwork on Instagram along with its release date, January 18. 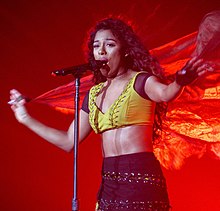 "7 Rings" is a trap-pop, R&B and rap song that runs for 2 minutes and 58 seconds. It features a heavy bass and sees Grande discuss "how global success has allowed her to enjoy the finer things". Billboard magazine noted it's "the most hip-hop-leaning song Grande has released in the post-Sweetener era yet, with Grande almost rapping the song's verses".

The song channels the melody of The Sound of Music's "My Favorite Things" in the verses: "Breakfast at Tiffany's/And bottles of bubbles/Girls with tattoos who like getting in trouble/Lashes and diamonds, ATM machines/Buy myself all of my favorite things". The song also interpolates The Notorious B.I.G.'s "Gimme the Loot" in the bridge.

Grande described the song as a "friendship anthem" that "evolves" from previous single "Thank U, Next", while embracing a new chapter. She opens up about how her break-up with Pete Davidson led her to "treating her friends instead".

"7 Rings" is written in the key of C# minor in common time with a tempo of 70 beats per minute. The song contains rapping segments however in the singing parts, Grande's vocals spans from G#3 to C#5.

The song received mixed to positive reviews. Rolling Stone's Brittany Spanos was positive of "7 Rings", calling it "dangerously fun, and as deliriously intoxicating as the champagne at Tiffany’s with all your best bitches." Markos Papadatos from Digital Journal praised Grande's vocals as "smooth and crystalline with a retro vibe to it" and said Grande has shown "consistency with the radio singles that she has put out, and each song stands out from a sonic and lyrical standpoint. "7 rings" is no different." Jamieson Cox from Pitchfork was mixed in her review and said the song "[is] a letdown given all of the hype. This is The Sound of Music's 'My Favorite Things' as flipped by Regina George, and its sneering tone is a far cry from Sweetener's benevolence..." The Atlantic's editor, Spencer Kornhaber, criticized the song, writing:

With "7 Rings", Grande joined Mariah Carey (3) and Britney Spears (2) as the only female artists to have two or more number-one debuts on the Billboard Hot 100. She passed Spears with the release of her 2020 single "Stuck with U", and subsequently passed Carey with the release of "Rain on Me" and "Positions".

In the United States, "7 Rings" debuted at number one on the Billboard Hot 100 issue dated February 2, 2019, becoming Grande's second number-one single, following "Thank U, Next", and the 33rd song to do so. With this, Grande joined Carey (3) and Britney Spears (2) as the only female artists with multiple number-one debuts; and at the time she was overall the fifth artist after Justin Bieber and Drake. She later broke the overall record with the number one debuts of "Stuck with U" and "Rain on Me". Grande also became the first artist to have their first two number-ones debut at the top spot. Among component charts, "7 Rings" debuted at the top of the Streaming Songs chart with 85.3 million US streams in the week ending January 24, 2019, according to Nielsen Music; the sum marked the second-biggest streaming week ever for a song by a female artist (after the aforementioned "Thank U, Next"). It also debuted at number one on the Digital Songs chart with 96,000 downloads. As the second single to her fifth album Thank U, Next, Grande had two singles that debuted at number one on the chart, making Grande the third artist in history to have an album with two songs that debuted at number one on the Hot 100, after Drake's Scorpion in 2018 and Mariah Carey's Daydream in 1995. "7 Rings" held the top spot for a fourth week following the release of her album Thank U, Next, blocking her singles "Break Up with Your Girlfriend, I'm Bored" (which debuted at number two), and "Thank U, Next" (which rose up to number three). With three songs in the top 3, Grande became the first artist in history since The Beatles in 1964 to occupy the top 3 spots on the chart and the first and only solo artist to ever achieve this record. "7 Rings" remained atop the Hot 100 for eight non-consecutive weeks until it was unseated by "Old Town Road" by Lil Nas X and descended to number three on April 13, 2019. It remained in the top ten for its first 16 weeks until it fell to number 11 on May 25, 2019.

In the UK, "7 Rings" became Grande's fourth number one in the country. The single sold 126,000 units, becoming Grande's biggest opening week. It also set the record for the most streams of a song in a week with 16.9 million streams. On the issue dated 21 February 2019, "7 Rings" was replaced by "Break Up with Your Girlfriend, I'm Bored", making Grande the second female artist to occupy the top two positions on the UK Singles Chart and the first female artist to self-replace on the top of the chart. The song reclaimed the summit position the following week, pushing "Break Up with Your Girlfriend, I'm Bored" down to number two, and thus making Grande the first artist in the chart's history to self-replace for two consecutive weeks.

In Australia, the song debuted at number one, becoming Grande's 3rd number one single.

Grande shared a preview of the music video on January 14, 2019. The video itself premiered on January 18, 2019 on Grande's YouTube channel. The video features many of Grande's close friends, with whom a shopping trip inspired the song.

The music video was directed by Hannah Lux Davis, who also directed the music videos for Grande's previous singles, "Breathin" and "Thank U, Next".

Billboard magazine called the pink-colored video "sassy", as Grande and her friends flash their diamond rings at a luxurious party in a "mansion that's decked with diamonds, graffiti, and a champagne tower". Digital Journal gave it an A rating, calling it "distinct and remarkable. It is creative and artistic and it will resonate with her fans." The "7 Rings" music video earned 23.6 million views in its first 24 hours. It currently has surpassed 900 million views on YouTube and has exceeded 1.3 billion views on Spotify.

The video begins outside a house with many women posing on cars and caressing each other. Then it shows the title saying "7 Rings" (also stylized as 七つのリング). The song then begins with Grande outside showing a far shot showing Grande and many other women, which then transitions to Grande in the kitchen with added pink LED lights around her. She is shown wearing jewellery around her neck, ears and some on her hair. She also sports pink hair extensions. The scene then moves to a party that shows Grande and backup dancers dancing, and drinking wine. Afterwards, the next scene depicts Grande in front of a tower of plastic-glass cups that are all filled with water. The scene after shows Grande pouring a wine bottle over them and also showing Grande's real life friends including Alexa Luria and singer/songwriter Victoria Monét (who also contributed songwriting to the track). The next scene then shows Grande laying down on the staircase with Rapunzel-inspired ponytail, also signifying her ex-boyfriend Pete Davidson's apartment. While also still showing scenes earlier in the video, a scene also shows Grande pouring a wine bottle over the tower of cups which end up falling down. The next scene involves a Barbie-inspired house showing Grande in a pink latex outfit (similar to Dangerous Woman). It then shows Grande ripping the wallpaper giving availability for her to peek inside. The final change is of Grande in a room with green lights giving resemblance to Wicked. The final scenes are of Grande outside with all her friends and backup dancers including her dog Toulouse. In conclusion it shows Grande saying "My bitches right here" which leads to the ending of the music video. 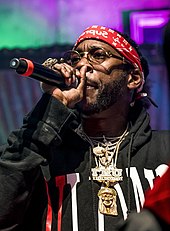 2 Chainz (pictured) featured on the official remix after meeting with Grande to discuss plagiarism accusations.

Grande was accused by American rapper Princess Nokia for plagiarism of her song "Mine". American rappers Soulja Boy and 2 Chainz also accused Grande of plagiarizing their respective songs "Pretty Boy Swag" and "Spend It". However, after severe backlash from fans, Princess Nokia deleted the video accusing Grande around the same time the remix with 2 Chainz was released. Grande would later appear on the track "Rule the World" from 2 Chainz's fifth studio album Rap or Go to the League (2019).

Grande was subject to criticism and some ridicule after getting a tattoo commemorative of the song which read 「七輪」(Shichirin) in Japanese. While the kanji that comprise the word literally translate to "seven" and "ring" respectively, shichirin commonly refers to a specific type of small barbecue grill or brazier. A later attempt to fix the tattoo by the addition of the character yubi (指, lit. "Finger") beneath 「七」, to give 「七指輪」Shichi yubiwa (yubiwa meaning "ring", as in the piece of jewelry) only drew further criticism.

Credits adapted from Tidal and Thank U, Next's liner notes.

Retrieved from "https://en.wikipedia.org/w/index.php?title=7_Rings&oldid=1006341638"
Uses material from the Wikipedia article 7 Rings, released under the CC BY-SA 3.0 license.