Abraham Elieser Adolph Schönberg (12 May 1868 – 12 August 1949), known as Al Shean, was a comedian and vaudeville performer. Other sources give his birth name variously as Adolf Schönberg, Albert Schönberg, or Alfred Schönberg. He is most remembered for being half of the vaudeville team Gallagher and Shean, and as the uncle of the Marx Brothers. 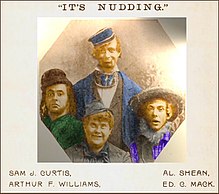 Shean was born in Dornum, Germany, on 12 May 1868, the son of Fanny and Levi or Louis Schoenberg. His father was a magician. His sister, Minnie, married Sam "Frenchie" Marx; their sons would become known as the Marx Brothers.

After making a name for himself in vaudeville, Shean teamed up with Edward Gallagher to create the act Gallagher and Shean in the 1920s. While the act was successful, the men apparently did not like each other much. After their act's final Ziegfeld Follies pairing, Shean went on to perform solo in eight Broadway shows, even playing the title character in Father Malachy's Miracle.

Shean had some solo film roles: as the piano player, known as "The Professor" in San Francisco (1936), as a priest in Hitler's Madman (1943), as grandfather in The Blue Bird (1940), and in some three dozen other films. He and Gallagher also made an early sound film at the Theodore Case studio in Auburn, New York, in 1925.