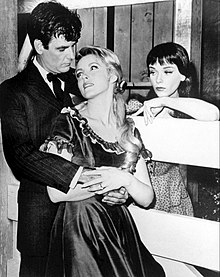 James Best, Laura Devon, and Anne Francis in "Jess-Belle", an episode of The Twilight Zone (1963)

Anne Francis (also known as Anne Lloyd Francis; September 16, 1930 – January 2, 2011) was an American actress known for her role in the science fiction film Forbidden Planet (1956) and for having starred in the television series Honey West (1965–1966), which was the first TV series with a female detective character's name in the title. She won a Golden Globe Award and was nominated for an Emmy Award for her role in the series.

Francis was born in Ossining, New York, on September 16, 1930. Contrary to some sources, which erroneously claim she was born Ann Marvak (rather than Francis), her parents' marriage registration and census records from 1925 and 1930 confirm that their names were Philip Ward Francis (1900–1974) and Edith (née Albertson) Francis (1901–1995).

She entered show business at a young age, working as a model at age five to help her family during the Great Depression. She made her Broadway debut at the age of 11.

Francis made her film debut in This Time for Keeps (1947). She played supporting roles in the films Susan Slept Here, So Young, So Bad, and Bad Day at Black Rock; her first leading role was in Blackboard Jungle (1955). Her best-known film role is that of "Altaira" in Forbidden Planet (1956), an Oscar-nominated science-fiction classic.

Francis was the star of a provocative 1960 movie about a high-priced call girl, Girl of the Night. In 1965, she had a leading role in the William Conrad film noir Brainstorm. In 1968, she played the role of Georgia James in the feature film Funny Girl and in the following year, played Nancy Ingersoll (the wife of Jerry Lewis's character) in the comedy Hook, Line & Sinker. She also co-starred in Impasse, an adventure film starring Burt Reynolds.

Her distinctive physical features were her blonde hair, striking blue eyes, and a small mole just to the right of her lower lip. The mole was even written into the script of one of her films.

Francis found success in television and was a frequent guest star in 1960s, 1970s, and 1980s made-for-TV movies and series programs. She guest-starred on The Untouchables as the title character in "The Doreen Maney Story", and starred twice in The Twilight Zone (in "The After Hours" and in "Jess-Belle"). She also appeared in two episodes of Alfred Hitchcock Presents (in "Hooked" and in "Keep Me Company") and three episodes of The Alfred Hitchcock Hour. She also appeared in 1961 on an episode of Route 66 (“Play it Glissando”) as Jan Johnson. And another episode of "Route 66" in 1961 (A Month of Sundays). Francis also appeared in two episodes of the Western series The Virginian, two episodes of Columbo ("Short Fuse" & "A Stitch in Crime") and in the episode "Incident of the Shambling Man" on the CBS western, Rawhide. She was cast in an episode of Gene Kelly's drama series, Going My Way, based on the 1944 film of the same name. During 1964, she guest-starred in two episodes, "Hideout" and "Rachel's Mother", of The Reporter, and made two successive appearances in The Man from U.N.C.L.E.

In 1965, Francis was cast as Honey West, a sexy private investigator who drove a Cobra and had a pet ocelot; the character was initially introduced on the ABC series Burke's Law, and then spun off as a series that lasted one season for a total of 30 half-hour episodes; its renown has lasted much longer than the actual series. She made a guest appearance in a 1967 episode of The Fugitive. She appeared in the 1967 episode, The Saucer, in The Invaders. Appears in Mission Impossible 1969 , The Double Circle , Gillian Colbee. She guest-starred in a 1973 episode, "Murder In The Doll's House", of Barnaby Jones.

At the start of the final season in 1971 of My Three Sons, Francis played bowling-alley waitress Terri Dowling, who marries character Laird Fergus McBain Douglas of Sithian Bridge, Scotland, and returned to his homeland as royalty. (Fred MacMurray played the dual character roles of Steve Douglas and Fergus McBain Douglas in this four-part story arc.) She appeared twice as a guest star on Columbo, once as the manipulated lover of the murderer ("Short Fuse", 1972) and once as the murder victim ("A Stitch in Crime", 1973).

During the 1980–81 season of Dallas, Francis had a recurring role as Arliss Cooper, the mother of Mitch and Afton Cooper. In 1982 she played the armored car robbing mother in 'In the Best of Families' episode. of CHIP's. She later played "Mama Jo" in the first few episodes of the 1984 TV-detective series Riptide. In that same year, she guest-starred in the premiere episode of Murder, She Wrote, credited as Anne Lloyd Francis; she went on to guest-star in two more episodes during the show's run. In December of 1984 and again credited as Anne Lloyd Francis, she guest-starred in a Christmas-themed episode of The Love Boat playing the mother of Kim Lankford's character, 'Carol' in the storyline, "Noel's Christmas Carol." She appeared on episodes of Matlock and The Golden Girls.

In 1996, she appeared in the Wings episode "The Lady Vanishes", as Vera, a 1940s gun moll-type character. In 1997 in Home Improvement episode "A Funny Valentine" as Liddy, Tim Allen's highschool classmate's mother. She guest-starred in 1998 on The Drew Carey Show as the mother of Drew's girlfriend Nicki in the episodes "Nicki's Parents" and "Nicki's Wedding". Francis' final television acting role was in "Shadows", a 2004 episode of Without a Trace.

Francis was married to United States Air Force pilot Bamlet Lawrence Price, Jr. from May 1952 through April 1955, and to Robert Abeloff from 1960 through 1964; she never remarried after divorcing Abeloff.

Francis was a Democrat and supported Adlai Stevenson's campaign during the 1952 presidential election.

Francis and Abeloff had one daughter, Jane Elizabeth Abeloff (born March 21, 1962). Francis later adopted Margaret "Maggie" West in 1970, one of the first adoptions granted to an unmarried person in California.

In 1982, Francis published an autobiography, Voices from Home, subtitled An Inner Journey. On its book cover, she wrote that the book "is my spiritual expose. It is about our essence of being, the inner workings of mind and spirit which contribute to the growth of the invisible and most important part of us."

Francis studied flying toward the end of the 1960s, eventually earning her pilot's license.

Anne Francis was diagnosed with lung cancer in 2007. She kept her followers informed of her progress on her website. She died on January 2, 2011, aged 80, from complications due to pancreatic cancer at a retirement home in Santa Barbara, California. She was cremated and her ashes scattered at sea.