The Battle of Landen or Neerwinden took place on 29 July 1693, during the Nine Years' War. It was fought around the village of Neerwinden in the Spanish Netherlands, now part of the municipality of Landen, Belgium.

After four years of war, all combatants were struggling to cope with its financial and material costs. Hoping to force his opponents into a negotiated peace, Louis XIV wanted to first improve his position by taking the offensive in the Rhineland, Catalonia and Flanders.

Marshal Luxembourg, French commander in Flanders, outmanoeuvred the Allies under William III. In doing so, he achieved local superiority, trapping their army in an extremely dangerous position, with a river to their rear. The only bridge was protected by the Allied right, which was strongly fortified and held the bulk of their artillery; most of the fighting took place in this area.

After a series of head-on attacks, the French eventually prevailed through sheer weight of numbers; both sides suffered heavy losses and the Allied army escaped, although they were forced to abandon most of their artillery. Like Steenkerque the previous year, Landen was a French victory that failed to achieve a decisive result; the Allies quickly replaced their losses, leaving the overall position unchanged.

Duc de Luxembourg, French commander in Flanders; the most talented of Louis XIV's generals, this would be his last campaign

Since 1689, the French generally had the better of the war in the Spanish Netherlands; in 1692, they captured Namur and won a narrow victory at Steinkirk but failed to split up the Grand Alliance. The November 1688 Glorious Revolution secured English resources for the anti-French alliance, while the 1691 Treaty of Limerick and the Anglo-Dutch naval victory at La Hogue ended attempts to restore James II. For the first time, the strategic situation was moving towards the Allies.

However, war exacerbated the impact of the Little Ice Age, a prolonged period of cold weather that reached its low point in the 1690s. After four poor years, in 1693 harvests failed completely throughout Europe, causing catastrophic famine; between 1695 and 1697, an estimated two million died of starvation in Southern France and Northern Italy alone. In addition, armies had grown from an average of 25,000 in 1648 to over 100,000 by 1697, a level unsustainable for pre-industrial economies; in the 1701 to 1714 War of the Spanish Succession, they averaged 35,000.

These factors particularly affected France, which was fighting a multi-front war without allies and needed peace, but Louis XIV always sought to improve his position before offering terms. The French held two key advantages over their opponents; undivided command and vastly superior logistics, which allowed them to mount offensives in early spring before their opponents were ready, seize their objectives and then assume a defensive posture.

In 1693, Louis decided to take the offensive in the Rhineland, Flanders and Catalonia. When the attack in Germany proved unexpectedly successful, Luxembourg was ordered to send 28,000 of his troops from Flanders to Germany, then prevent William doing the same.

By stripping garrisons from towns throughout Maritime Flanders, including Dunkirk and Ypres, Luxembourg increased his field army to 116,000. On 9 June, he embarked on a series of marches, simultaneously threatening Liège, Huy and Charleroi; the Governor of the Spanish Netherlands, Maximilian of Bavaria, insisted on covering all three, forcing the Allies to divide their army of 120,000.

On 18 July, Luxembourg ordered Villeroy to move against Huy; the Allies marched to its relief, but before they could so so, the town surrendered on 23 July. William now halted and reinforced Liège with an additional ten battalions, bringing the garrison to 17,000. His remaining troops established a line running in a rough semicircle from Eliksem on the right, to Neerwinden on the left; although this provided flexibility of response, movement was restricted by the Little Geete River, three kilometres to the rear. 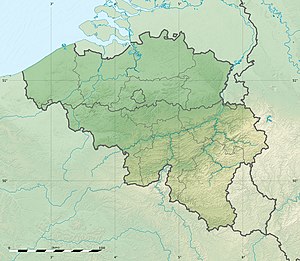 Seeing an opportunity, on 28 July Luxembourg reversed his route, and after a forced march of 30 kilometres, arrived at the village of Landen in the early evening. William was notified of the French approach by mid-afternoon, but decided to stand and fight, rather than risk a river crossing at night. His situation was extremely dangerous; Luxembourg outnumbered him 66,000 to 50,000, while the area enclosed by his troops was too shallow for manoeuvring.

The Allied right was key to the position, as it protected their only line of retreat across the Geete. They constructed strong defences, anchored by the villages of Laar and Neerwinden; 80 of their 91 pieces of heavy artillery were placed behind them. In the centre, the open ground between Neerwinden and Neerlanden was solidly entrenched with the village of Rumsdorp as an advance post. The left rested on Landen brook and was the hardest to attack; this area saw little action until the end of the battle.

The French bombardment began at 8:00 am and an hour later, 28 battalions attacked along the line from Laar and Neerwinden (see Map); after fierce house to house fighting, they captured Laar and pushed the Allied troops in Neerwinden to the very edge of the village. The Allied right was close to collapse but the diversionary attacks on the centre and left did not materialise, allegedly because Villeroy claimed he had not received orders to do so. The Allies were able to reinforce Neerwinden, counter-attack and retake both villages.

A second assault led by the Prince de Conti was also repulsed but Luxembourg used 7,000 men from his infantry on the centre and left for a third attempt. As William moved additional units to reinforce his right, the French cavalry commander Feuquières attacked. Patrick Sarsfield, an Irish Jacobite exile, was mortally wounded in this charge but the French over-ran the Allied entrenchments, inflicting heavy casualties.

It was now 15:00; two hours later, the Allies had managed to retreat over the Geete, abandoning most of their artillery, which was entrenched and could not be withdrawn in time. Nine battalions of Dutch infantry under Count Solms fought a stubborn rearguard action, although Solms was killed. Helped by several British units holding positions around the bridge and cavalry charges led by William himself, this enabled most of the army to escape.

This was Luxembourg's last battle; he died in January 1695, depriving Louis of his best general. Landen might have been a crushing victory if the simultaneous attacks he ordered on the Allied left and centre had been made as planned. As it was, both sides suffered heavy casualties; the Allies lost around 12,000 killed or wounded, with another 2,000 captured, mostly Dutch troops cut off in Rumsdorp, which they held for most of the day. The French suffered over 10,000; a visitor to the area in 1707 noted the fields were still scattered with the bones of the dead.

William had a silver medal struck to celebrate his success in 'saving Liege' and escaping with the bulk of his troops. This was partly propaganda to counter the Battle of Lagos on 27 June, when the French intercepted a large Anglo-Dutch convoy and inflicted serious commercial losses. However, there was also some truth to the claim; William escaped a possible disaster and quickly replaced his losses, leaving the French little to show for their hard-fought victory.

Although Luxembourg has been criticised for failing to exploit his victory, his troops were exhausted. The poor harvests of previous years meant a lack of forage for the horses needed for transport; acquisition of the Allied artillery proved a mixed blessing, as the French barely had sufficient to move their own. The offensive came to an end, although Charleroi was captured in October.

Your honour remembers with concern, said the corporal, the total rout and confusion of our camp and army at the affair of Landen; every one was left to shift for himself; and if it had not been for the regiments of Wyndham, Lumley, and Galway, which covered the retreat over the bridge Neerspeeken, the king himself could scarce have gained it - he was press'd hard, as your honour knows, on every side of him...

Uses material from the Wikipedia article "Battle of Landen", released under the CC BY-SA 3.0 license.