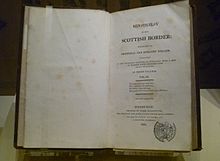 A copy of Scott's Minstrelsy Of The Scottish Border in the National Museum of Scotland.
Song genre from the Anglo-Scottish border

Border ballads are a group of songs in the long tradition of balladry collected from the Anglo-Scottish border. Like all traditional ballads, they were traditionally sung unaccompanied. There may be a repeating motif, but there is no "chorus" as in most popular songs. The supernatural is a common theme in border ballads, as are recountings of raids and battles.

The ballads belong to various groups of subjects, such as riding ballads like Kinmont Willie, historical ballads like Sir Patrick Spens, and comic ballads like Get Up and Bar the Door

Representative samples include "Thomas the Rhymer" (also known as "True Thomas", "Thomas of Erceldoune"), which opens in the Scottish town of Erceldoune (modern Earlston, Berwickshire); and "Tam Lin".

Sir Walter Scott wrote about border ballads in Minstrelsy of the Scottish Border - which was first published in 1802-3.

A.L. Lloyd said of the ballads: