County Down (Irish: Contae an Dúin) is one of the thirty-two counties of Ireland, one of the six counties of Northern Ireland and one of the nine counties of the Province of Ulster, in the northeast of the island of Ireland. It covers an area of 2,448 km2 (945 sq mi) and has a population of 531,665. It borders County Antrim to the north, the Irish Sea to the east, County Armagh to the west, and County Louth across Carlingford Lough to the southwest.

In the east of the county is Strangford Lough and the Ards Peninsula. The largest town is Bangor, on the northeast coast. Three other large towns and cities are on its border: Newry lies on the western border with County Armagh, while Lisburn and Belfast lie on the northern border with County Antrim. Down contains both the southernmost point of Northern Ireland (Cranfield Point) and the easternmost point of Ireland (Burr Point).

In March 2018, The Sunday Times published its list of Best Places to Live in Britain, including five in Northern Ireland. The list included three in County Down: Holywood, Newcastle, and Strangford.

County Down takes its name from dún, the Irish word for dun or fort, which is a common root in Gaelic place names (such as Dundee, Dunfermline and Dumbarton in Scotland and Donegal and Dundalk in Ireland). The fort in question was in the historic town of Downpatrick, originally known as Dún Lethglaise ("fort of the green side" or "fort of the two broken fetters"). 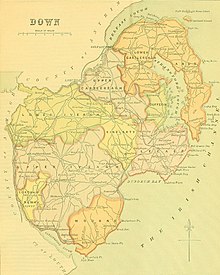 1885 map, with the county divided into baronies

According to Ptolemy During the 2nd century the region was home to the Voluntii tribe. From the 400s-1177 County Down formed a central part of the kingdom of Ulaid. Ulaid was a frequent target of viking raids in the eighth and ninth centuries,however fierce local resistance prevented the Norse from setting up permanent settlements in the region. In 1001 a fleet led by Sigtrygg Silkbeard raided much of the region in retribution for the Ulaiden's refusal to offer him sanctuary from Brian Boru the previous year.

The region was invaded by the Normans in 1177. From the 1180s-1600s the region would see waves of English and Scottish immigration. The county was privately planted during the Plantation period.During the Williamite War in Ireland (1689–1691) the county was a centre of Protestant rebellion against the rule of the Catholic James II. After forming a scratch force the Protestants were defeated by the Irish Army at the Break of Dromore and forced to retreat, leading to the whole of Down falling under Jacobite control. Later the same year Marshal Schomberg's large Williamite expedition arrived in Belfast Lough and captured Bangor. After laying siege to Carrickfergus Schomberg marched south to Dundalk Camp, clearing County Down and much of the rest of East Ulster of Jacobite troops. 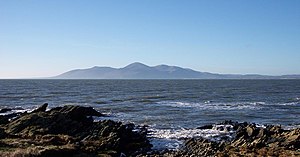 The county has a coastline along Belfast Lough to the north and Carlingford Lough to the south (both of which have access to the sea). Strangford Lough lies between the Ards Peninsula and the mainland. Down also contains part of the shore of Lough Neagh. Smaller loughs include Lough Island Reavy.

The River Lagan forms most of the border with County Antrim. The River Bann also flows through the southwestern areas of the county. Other rivers include the Clanrye and Quoile.

There are several islands off the Down coast: Mew Island, Light House Island and the Copeland Islands, all of which lie to the north of the Ards Peninsula. Gunn Island lies off the Lecale coast. In addition, there are a large number of small islands in Strangford Lough.

County Down is where, in the words of the song by Percy French, "The mountains of Mourne sweep down to the sea", and the area around the granite Mourne Mountains continues to be known for its scenery. Slieve Donard, at 849 m (2,785 ft), is the highest peak in the Mournes, in Northern Ireland and in the province of Ulster. Another important peak is Slieve Croob, at 534 m (1,752 ft), the source of the River Lagan.

Main article: List of civil parishes of County Down

The county was administered by Down County Council from 1899 until the abolition of county councils in Northern Ireland in 1973. County Down is now served by the following local government districts:

A steam train on the Downpatrick and County Down Railway travelling through the Ulster drumlin belt near Downpatrick.

The Down County Board administers Gaelic games in the county. Down is the most successful team north of the border in terms of All-Ireland Senior Football Championships won with five (1960, 1961, 1968, 1991 and 1994) in total. In terms of Ulster, they share that accolade with Cavan who also have 5 titles. They currently have four minor All-Ireland titles, twelve Ulster titles and one under 21 all Ireland title (1979).

County Down is also home to the No.1-ranked golf course outside of the US, according to Today's Golfer, Royal County Down, which is situated in Newcastle.

Currently ranked No.1 golfer in the world, Rory McIlroy originates from Holywood, situated in the north of the county.

"Star of the County Down" is a popular Irish ballad.

The county is named in the lyrics of the song "Around the World", from the film Around the World in 80 Days, which was an American top ten hit for Bing Crosby and UK top ten hit for Ronnie Hilton, both in 1957, although it was Mantovani's instrumental version which was actually used in the film. Rihanna's video "We Found Love" was filmed there in 2011, causing complaints when the singer removed her clothes to reveal a bikini.

The Ulster singer Van Morrison has made reference to the County Down in the lyrics to several songs including "Northern Muse (Solid Ground)", "Mystic of the East" and the nostalgic "Coney Island", which names several places and landmarks in the county. Van Morrison also covered "Star of the County Down" with The Chieftains as a part of their collaboration album Irish Heartbeat.

C.S. Lewis, author of The Chronicles of Narnia, was inspired by the Mourne Mountains. There is a Narnia trail in Kilbroney Park, in Rostrevor.

Sam Hanna Bell based his novel of Ulster rural life, December Bride (1951) in the Ards peninsula. A film version of the novel, also called December Bride, was produced in 1990 and released in November 1991.

Retrieved from "https://en.wikipedia.org/w/index.php?title=County_Down&oldid=1010100616"
Uses material from the Wikipedia article County Down, released under the CC BY-SA 3.0 license.