Area of less density than suburbs 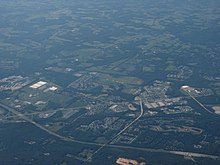 Exurban-style density along the Pennsylvania-Maryland-Delaware border, part of Philadelphia metropolitan area. There is continuous exurban development from north of Boston to south of Richmond, Virginia, in the Northeast megalopolis. 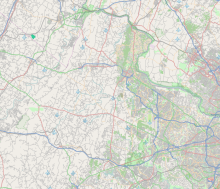 An exurb (alternately: exburb or exurban area) is an area outside the typically denser inner suburban area of a metropolitan area, which has an economic and commuting connection to the metro area, low housing density, and growth. It shapes an interface between urban and rural landscapes holding an urban nature for its functional, economic, and social interaction with the urban center, due to its dominant residential character. The word exurb (a portmanteau of extra and urban) was coined by Auguste Comte Spectorsky, in his 1955 book The Exurbanites, to describe the ring of prosperous communities beyond the suburbs that are commuter towns for an urban area.

See also: List of exurbs in the United States

Since the Finding Exurbia report by the Brookings Institution in 2006, the term is generally used for areas beyond suburbs and specifically less densely built than the suburbs to which the exurbs' residents commute. To qualify as exurban, a census tract must meet three criteria:

These are based on published datasets. Alternative approaches include working with Oak Ridge National Laboratory LandScan data and GIS.

Exurban areas incorporate a mix of rural development (e.g., farms and open space) and in places, suburban-style development (e.g., tracts of single-family homes, though usually on large lots). In long-settled areas, such as the U.S. Northeast megalopolis, exurban areas incorporate pre-existing towns, villages and smaller cities, as well as strips of older single-family homes built along pre-existing roads that connected the older population centers of what was once a rural area. The Brookings Institution listed exurban counties, defined as having at least 20% of their residents in exurban Census tracts:

Retrieved from "https://en.wikipedia.org/w/index.php?title=Exurb&oldid=1002716400"
Uses material from the Wikipedia article Exurb, released under the CC BY-SA 3.0 license.