Felidae (/ˈfɛlɪdiː/) is a family of mammals in the order Carnivora, colloquially referred to as cats, and constitutes a clade. A member of this family is also called a felid (/ˈfiːlɪd/). The term "cat" refers both to felids in general and specifically to the domestic cat (Felis catus).

Felidae species exhibit the most diverse fur pattern of all terrestrial carnivores. Cats have retractile claws, slender muscular bodies and strong flexible forelimbs. Their teeth and facial muscles allow for a powerful bite. They are all obligate carnivores, and most are solitary predators ambushing or stalking their prey. Wild cats occur in Africa, Europe, Asia and the Americas. Some wild cat species are adapted to forest habitats, some to arid environments, and a few also to wetlands and mountainous terrain. Their activity patterns range from nocturnal and crepuscular to diurnal, depending on their preferred prey species.

Reginald Innes Pocock divided the extant Felidae into three subfamilies: the Pantherinae, the Felinae and the Acinonychinae, differing from each other by the ossification of the hyoid apparatus and by the cutaneous sheaths which protect their claws. This concept has been revised following developments in molecular biology and techniques for analysis of morphological data. Today, the living Felidae are divided in two subfamilies: the Pantherinae and Felinae, with the Acinonychinae subsumed into the latter. Pantherinae includes five Panthera and two Neofelis species, while Felinae includes the other 34 species in ten genera.

The first cats emerged during the Oligocene about 25 million years ago, with the appearance of Proailurus and Pseudaelurus. The latter species complex was ancestral to two main lines of felids: the cats in the extant subfamilies and a group of extinct cats of the subfamily Machairodontinae, which include the saber-toothed cats such as the Smilodon. The "false sabre-toothed cats", the Barbourofelidae and Nimravidae, are not true cats, but are closely related. Together with the Felidae, Viverridae, hyaenas and mongooses, they constitute the Feliformia.

All members of the cat family have the following characteristics in common:

The colour, length and density of their fur is very diverse. Fur colour covers the gamut from white to black, and fur pattern from distinctive small spots, stripes to small blotches and rosettes. Most cat species are born with a spotted fur, except the jaguarundi (Herpailurus yagouaroundi), Asian golden cat (Catopuma temminckii) and caracal (Caracal caracal). The spotted fur of lion (Panthera leo) and cougar (Puma concolor) cubs change to a uniform fur during their ontogeny. Those living in cold environments have thick fur with long hair, like the snow leopard (Panthera uncia) and the Pallas's cat (Otocolobus manul). Those living in tropical and hot climate zones have short fur. Several species exhibit melanism with all-black individuals.

In the great majority of cat species, the tail is between a third and a half of the body length, although with some exceptions, like the Lynx species and margay. Cat species vary greatly in body and skull sizes, and weights:

Most cat species are also induced ovulators, although margays appear to be spontaneous ovulators. 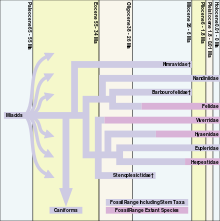 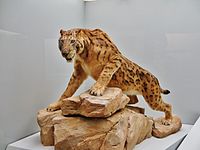 The family Felidae is part of the Feliformia, a suborder that diverged probably about 50.6 to 35 million years ago into several families. The Felidae and the Asiatic linsangs are considered a sister group, which split about 35.2 to 31.9 million years ago.

In the Early Miocene about 20 to 16.6 million years ago, Pseudaelurus lived in Africa. Its fossil jaws were also excavated in geological formations of Europe's Vallesian, Asia's Middle Miocene and North America's late Hemingfordian to late Barstovian epochs.

Results of mitochondrial analysis indicate that the living Felidae species descended from a common ancestor, which originated in Asia in the Late Miocene epoch. They migrated to Africa, Europe and the Americas in the course of at least 10 migration waves during the past ~11 million years. Low sea levels, interglacial and glacial periods facilitated these migrations. Panthera blytheae is the oldest known pantherine cat dated to the late Messinian to early Zanclean ages about 5.95 to 4.1 million years ago. A fossil skull was excavated in 2010 in Zanda County on the Tibetan Plateau. Panthera palaeosinensis from North China probably dates to the Late Miocene or Early Pliocene. The skull of the holotype is similar to that of a lion or leopard. Panthera zdanskyi dates to the Gelasian about 2.55 to 2.16 million years ago. Several fossil skulls and jawbones were excavated in northwestern China. Panthera gombaszoegensis is the earliest known pantherine cat that lived in Europe about 1.95 to 1.77 million years ago.

Living felids fall into eight evolutionary lineages or species clades. Genotyping of nuclear DNA of all 41 felid species revealed that hybridization between species occurred in the course of evolution within the majority of the eight lineages.

Traditionally, five subfamilies have been distinguished within the Felidae based on phenotypical features: the Pantherinae, the Felinae, the Acinonychinae, and the extinct Machairodontinae and Proailurinae.

The phylogenetic relationships of living felids are shown in the following cladogram:

Retrieved from "https://en.wikipedia.org/w/index.php?title=Felidae&oldid=1001486578"
Uses material from the Wikipedia article Felidae, released under the CC BY-SA 3.0 license.